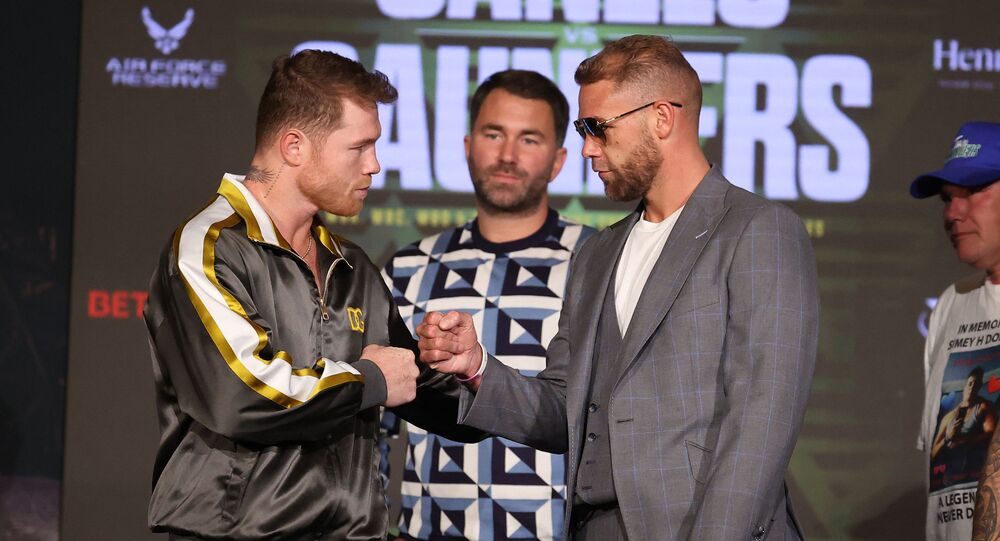 Texas has had almost three million COVID-19 cases since the start of the pandemic and the virus has claimed 50,000 lives in the Lone Star State. But despite that Arlington in Texas is to stage a super-middleweight boxing showdown indoors this weekend.

Boxing fans around the world are licking their lips as WBC and WBA champion Saul “Canelo” Alvarez takes on Britain’s WBO title holder Billy Joe Saunders in a massive unification fight on Saturday, 8 May.

The fight is taking place at the 70,000-seater AT&T Stadium in Arlington, Texas - the home of the Dallas Cowboys NFL team - but because the roof will be closed it will officially take place indoors.

The bout is set to break the record for an indoor crowd at a boxing event - in 1978 Muhammad Ali regained the world heavyweight title against Leon Spinks at the Superdome in New Orleans in front of 63,352 fans.

Saunders’ promoter Eddie Hearn said: "It’s one of the biggest events I’ve ever been involved in and this morning, we officially broke the record for the biggest indoor crowd in American boxing history."

The Republican Governor of Texas, Greg Abbott, lifted most coronavirus restrictions in March and the Texas Tribune reported last month that there had been no "surge" in cases despite only a fifth of Texans having been vaccinated.

Hearn said he was “absolutely buzzing” about the fight and predicted there could be 70,000 people at ringside on Saturday.

He purred: "The numbers for this fight are tracking great, and I think that this is just great for everyone - the biggest live event since the pandemic struck, and boxing has done that. It just shows that when you get it right, we have a monstrous sport on our hands."

The hot favourite with the bookmakers is the Mexican-American Saul Alvarez, who is nicknamed Canelo (Cinnamon in Spanish) because of his red hair.

Alvarez, who was born in Guadalajara, has lost only once - on points to the peerless Floyd Mayweather in 2013 - and handed Gennady Golovkin his only defeat, on points, in September 2018, a year after the pair fought out a draw in Las Vegas.

Alvarez, 30, also ended the career of Sergei Kovalev with a knockout in 2019 and scrambled the senses of Britain’s Amir Khan in 2016, knocking him out in the sixth round.

Saunders, 31, is unbeaten in 30 fights but has only won 14 by KO and has nobody of the class of Golovkin or Khan on his record.

His best win was a split decision victory over a then unbeaten Chris Eubank junior in 2014 and in his last fight in December he laboured to a points win over Martin Murray, a journeyman who had five losses on his record.

Eubank - whose father Chris was a ring legend in the 1990s - has bet £10,000 on Canelo stopping Saunders inside the distance and has pledged to give the winnings to charity.

The bet has been placed! Billy Schmoe Saunders to get cleaned out by Canelo Alvarez this Saturday. Oh... & the 10k I stand to win will all go to charity 💸💸 pic.twitter.com/QjEYKbB6Mz

​But Saunders is a good defensive fighter and is expected to be there when the bell rings at the end of the 12th round.

If Alvarez wins he could challenge IBF king Caleb Plant in a bid to become the undisputed super-middleweight champion.

But if Saunders wins there will be a big celebration in Britain’s gypsy community. Saunders is from a traveller family, like heavyweight champion Tyson Fury.

Because of the travel restrictions due to the coronavirus none of his fans are expected to be at ringside and the stadium will be a wall of noise for the Mexican-American.