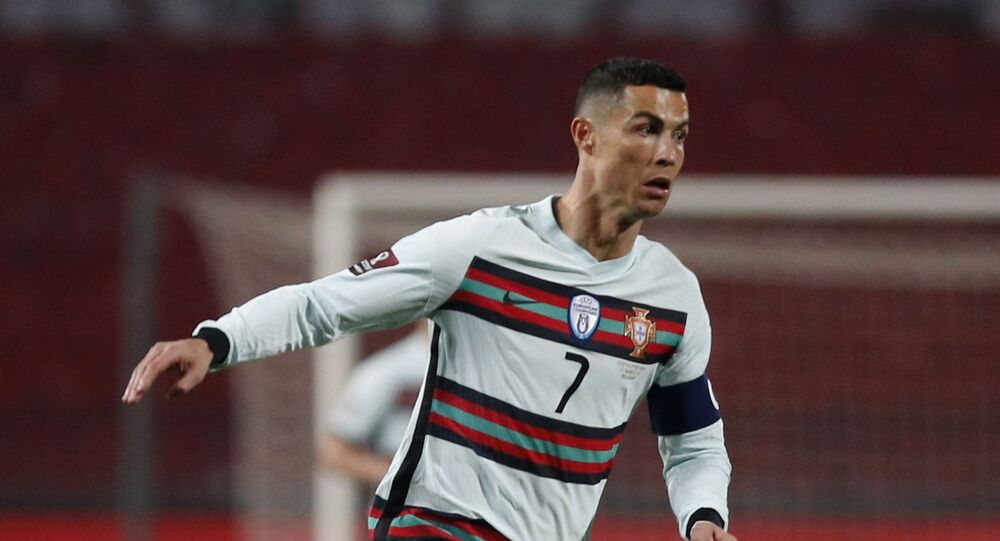 A frustrating season for Juventus and the Italian club’s forward, Cristiano Ronaldo, has seen them knocked out of the Champions League in early March and facing a loss of the Serie A title, with the Portugese superstar’s future with Vecchia Signora ("the Old Lady"), in doubt after his contract expires in June 2022.

Juventus' Serie A victory over Genoa on Sunday took the Turin-based Italian football club to third place on the table, yet left Portugese forward Cristiano Ronaldo with a sour taste.

​The football icon visibly vented his frustration after Juve cruised to a 3-1 victory over Genoa in the Italian Football Championship on Sunday.

Goals hammered into the net by Dejan Kulusevski, Alvaro Morata and Weston McKinnie allowed the Turin-based club to claim three points and secure third place in the ranking table, one point behind second-placed AC Milan and 12 points behind leaders Inter Milan.

However, Ronaldo was apparently unable to contain his frustration after failing to score a goal himself.

‘Poor passes' from a number of his teammates, including Giorgio Chiellini and Federico Chiesa left the 36-year-old winner of five Ballon d’Or awards and four European Golden Shoes 'angry', according to La Gazetta dello Sport.

​A row with goalkeeper Wojciech Szczesny also ostensibly ensued, after he threw the ball out because there was a Genoa player on the ground.

“There are ten of them, we have to attack,” the Polish goalkeeper had told the team.

After the game, Ronaldo threw his Juventus shirt on the ground, writes the outlet, although the gesture was made in the direction of a ball-boy who had asked for it.

‼🗣 Romeo Agresti :
Cristiano Ronaldo didn’t throw any shirt on the ground at the end of the match. A ball boy asked him for his shirt, he took it off and threw it to him. pic.twitter.com/l6YVhVsIae

​Later, in the dressing room, the player, who in 2018 signed for Juventus in a transfer worth an initial €100 million (£88 million) - the highest fee ever paid by an Italian club and the highest ever paid for a player over 30 years old, is said to have 'punched the wall' in anger.

Manager Andrea Pirlo was cited as confirming that Ronaldo was frustrated that he had failed to add more goals this season to his Serie A score of 25.

“He was angry because he didn't manage to score. It's normal that someone like him always wants to improve. I don't think he will be fined, it can happen to have moments of nervousness,” Pirlo was quoted as saying.

Amid a disappointing season that saw Juventus exit the Champions League on 9 March after a 3-2 win wasn’t enough for them to overcome Porto due to a 2-1 first-leg loss, the Italian champions face the possible loss of the Serie A title.

If the Bianconeri had qualified, they would have received €10.5 million for reaching the quarter-finals.

A €130 million UEFA bonus might have been theirs for the taking if they had proceeded to win the competition.

According to La Stampa, Juventus will lose 8 percent of their overall budget now, as qualification from the round of 16 had been factored in as a certainty.

This has sparked speculations that some players might be sold.

The man with the most expensive deal is Cristiano Ronaldo, whose contract expires in June 2022.

Juventus could move him to generate some return on their €100m (£88m) investment back in 2018, writes La Stampa.

While a potential transfer to Paris Saint-Germain and a return to Real Madrid have been reported as possible, according to sports journalist Fabrizio Romano, Ronaldo’s future at the club is not something that will be discussed in the immediate weeks.

.@FabrizioRomano: "At the end of the season, [Cristiano] Ronaldo and Juventus will meet with the agent Jorge Mendes to decide about the future of the player..."

Ma man Fab joins me on @QueGolazoPod to chat about Ronaldo's future, Juve and a big summer ahead for the Italian club.

​Juventus’ club president Andrea Agnelli and Chief Football Officer Fabio Paratici will meet at some point with Ronaldo, or his agent Jorge Mendes, to discuss the star forward’s future at the club beyond this current season.