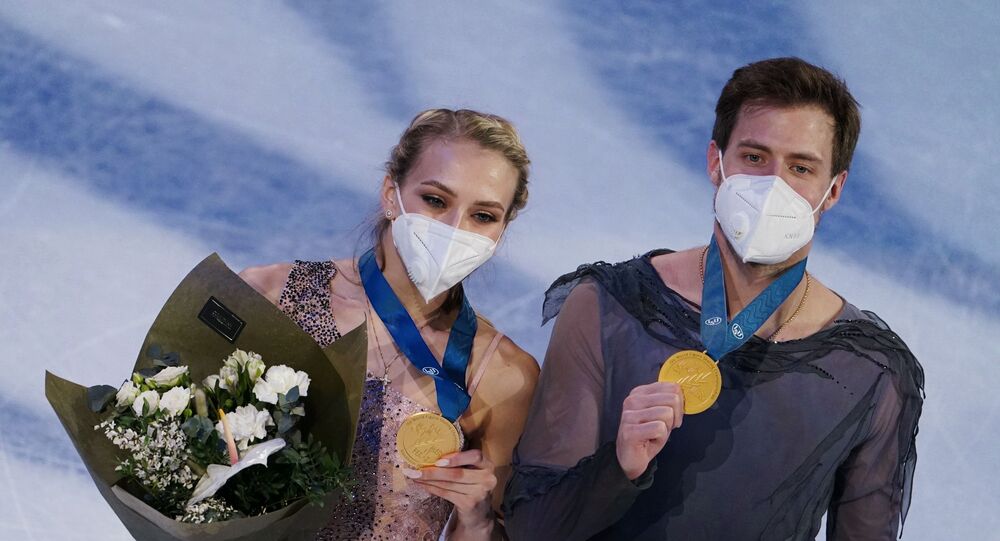 Russian figure skaters Victoria Sinitsina and Nikita Katsalapov won gold in the ice dancing event at the 2021 World Championships in Stockholm on Saturday.

The duet received 133.02 points and won with a total of 221.17. Second place was secured by American skaters Madison Hubbell and Zachary Donohue, while third went to the Canadian duet of Piper Gilles and Paul Poirier.

"Everything was organized at the highest level, the only thing that was missing was the audience. I want to thank our team that led us to this success. I left all emotions on the ice", Katsalapov said after the performance, with Sinitsina weighing in: "I'm very happy, I don't know what to say. I can only smile and cry."

© Sputnik / Alexander Wilf
Victoria Sinitsina and Nikita Katsalapov performing their free skating program during the contest for the ice dance title at the World Figure Skating Championships in Stockholm, Sweden

Sinitsina and Katsalapov secured the European championship titles in 2020, and received silver in World Championships 2019.

Earlier on Friday, Russian skaters Anna Shcherbakova, Elizaveta Tuktamysheva and Alexandra Trusova dominated the entire podium in women's singles for the first time in the history of the World Figure Skating Championships.

The 2021 World Figure Skating Championships is taking place in the Swedish capital city of Stockholm, from March 22–28, 2021, with skaters competing for world titles in men's singles, women's singles, pairs, and ice dancing.