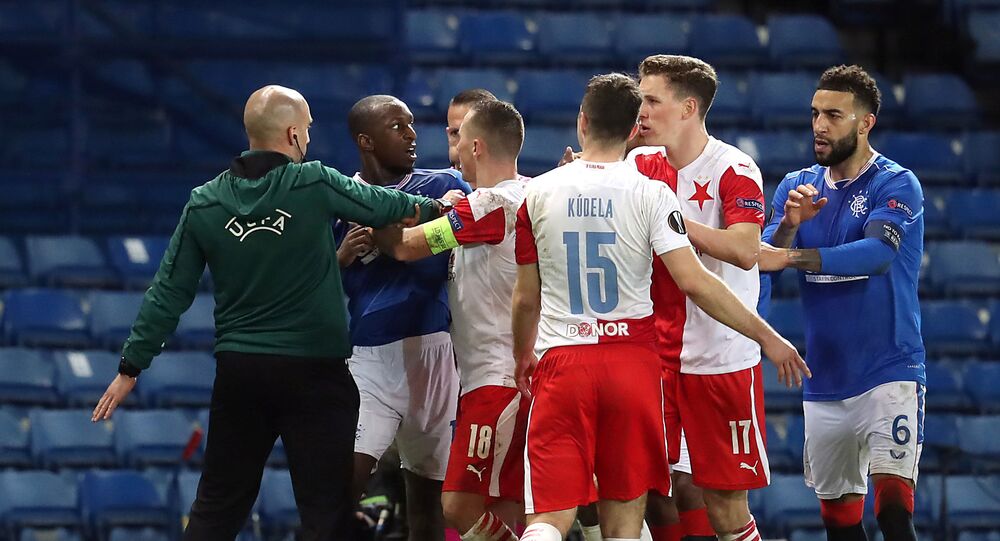 Glasgow Rangers, managed by former Liverpool star Steven Gerrard, crashed out of the Europa League after being defeated 3-1 on aggregate by Slavia Prague. The Czech team will play another British team, Arsenal, in the quarter finals.

Slavia Prague have reacted angrily to accusations by Rangers manager Steven Gerrard that their captain, Ondřej Kúdela, racially abused one of his players during Thursday night’s bad-tempered match in Glasgow.

Kúdela ran across the pitch and then covered his face to whisper something into the ear of Rangers midfielder Glen Kamara, who reacted furiously.

​Gerrard said: "I, 100 percent, believe what he is saying in terms of the accusation. Other players around him heard it so I will stand toe to toe with Glen Kamara and I'll deal with this however Glen wants to deal with it."

In an interview with Sky Sports, Gerrard said he was angry and added: "It is over to UEFA now - I just hope it doesn't get brushed under the carpet."

But the Czech club have issued a statement in which they say: “Slavia resolutely denies the disgusting accusation of one of the team captains Ondřej Kúdela of racist behaviour.”

​They then go on to explain their version of events: “After one of the brutal fouls, Ondřej Kúdela spoke to one of the Rangers players.”

They say Kúdela has stated: “I told him ‘You f***ing guy’. It was said in emotions, but I absolutely deny there was anything racist in those words.”

UEFA have launched an investigation into the incident but many people on social media have taken Kamara’s side and point out how odd it was for Kudela to cover his mouth.

The teams were level 1-1 from the first leg in Prague but Slavia won 2-0 on the night to progress to the next round, where they will play another British team, Arsenal.

The London club have several black players and Kamara - the player at the centre of the Ibrox incident - is a former Arsenal youth player. So their games with Slavia could be lively affairs.

​The game was a brutal affair with the Slavia goalkeeper, Ondřej Kolář, badly injured from a challenge by Rangers’ Kemar Roofe, who was sent off along with another and Rangers player, Leon Balogun.

In their statement the Czech club said: “Slavia players faced an unprecedentedly malicious play from their opponents. They have never experienced such play in any game they participated in modern history of the European competitions. Many brutal tackles resulted in injuries of our players.”

​Slavia claimed were not allowed to enter their dressing room after thegame and claimed Kúdela was assaulted by Kamara and said Gerrard witnessed this incident.

UEFA said: "UEFA is aware of an incident which occurred in the tunnel after the end of the match and which involved some players of both teams. We are waiting to receive detailed reports of the match officials who were present at the game before commenting further."