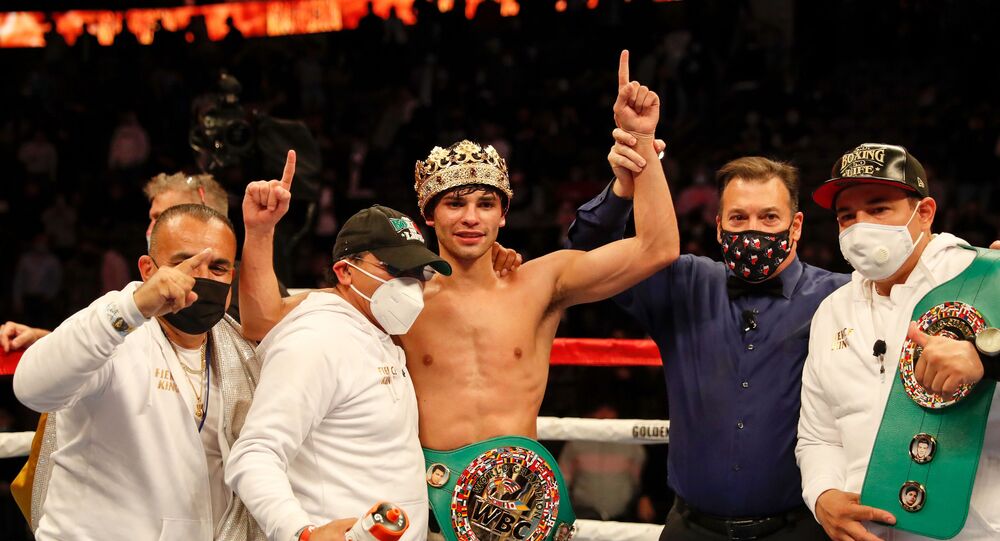 Ryan Garcia has only fought 67 rounds of boxing but he already has 8.4 million followers on Instagram and another 3.2 million on TikTok. The fresh-faced 22-year-old is now being lined up for a big money fight with ring legend Manny Pacquiao.

Ryan Garcia may not be a household name yet but the social media phenomenon is in pole position to fight Manny Pacquiao in one of the biggest boxing events of 2021.

Garcia is just 22 while the Filipino ring legend is 42 and boxing fans have pointed out Pacquiao had his first fight three years before the American was born.

Garcia, who was born in California and is of Mexican-American heritage, has won 21 fights without a defeat and has stopped 18 opponents inside the distance.

But he was knocked down in the second round of his recent fight with Luke Campbell and, although he stopped the Englishman in the seventh with a sickening body punch, many boxing pundits believe he has not done enough to be mentioned in the same breath as Pacquiao, one of the best pound-for-pound fighters of the 21st century.

So why is Pacquiao-Garcia considered a viable contest?

In October SportsPro identified Ryan Garcia as the 12th most marketable athlete on the planet - way ahead of fellow boxers Anthony Joshua and Tyson Fury, who were 31 and 32 on the list.

His boyish good looks and huge social media presence is believed to be responsible for his popularity with a younger demographic, people who do not traditionally follow boxing but have tuned in to watch YouTubers KSI and Logan Paul fight and also to watch an exhibition bout between veterans Mike Tyson and Roy Jones, seen as a circus sideshow to most boxing fans.

​Patrick Connor, co-host of the Knuckles and Gloves podcast, said of the Garcia-Pacquiao fight: "This is the kind of fight that does rope in a lot of casual viewers…but it’s a weird fight that I wouldn’t have quite expected. But I don’t see a down side from Pacquiao’s point of view, especially if it makes a lot of money."

Connor said: "There is no arguing that the main talking point when it comes to discussing Ryan Garcia is that he is a social media star…I personally think there is room for growth as a fighter. I think he did show some chutzpah by getting knocked down and getting back up and do well (against Campbell)…what’s worrisome is that Luke Campbell is not a very big puncher and if you give someone who is a big puncher that opportunity he is probably going to go to sleep or getting hurt much worse. That’s a concern."

Boxing expert and author Brin Jonathan-Butler, speaking on the Knuckles and Gloves podcast, said traditionalists may resent the popularity of contests between YouTubers or old men like Tyson and Jones they were able to attract casual fans who would not watch a 12-round fight between the two best pound-for-pound fighters in the world, Terence Crawford and Errol Spence.

But the Pacquiao-Garcia fight is by no means a foregone conclusion.

Pacquiao is back in training and is rumoured to be mulling over bouts with Crawford or Spence as well as MMA fighter Conor McGregor, whose only fight in the ring was a one-sided defeat by Floyd Mayweather.

But Garcia is clearly keen on fighting Pacquiao, either in Las Vegas or possibly in Macao or Dubai.