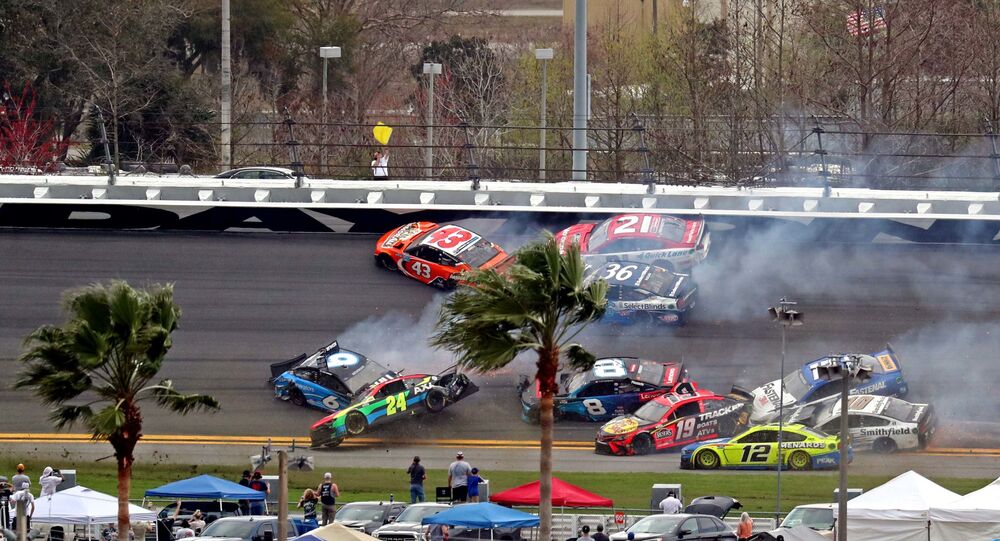 Video: 16-Car Pile Up in Massive Racing Accident During Daytona 500

Daytona 500 is considered to be the one of the most important and prestigious races in the NASCAR calendar, a 500-mile [some 800 kilometres] motor race held annually at Daytona International Speedway in Florida.

16 cars appeared to have crashed in a pile-up during NASCAR's Daytona 500 on Sunday afternoon, with Daniel Suarez, the driver of the No.99 Chevrolet Camaro, one of the racers involved in the accident.

A pileup occurred during the 14th lap of the race, started by Aric Almirola, who hit pole-sitter Alex Bowman. According to Fox News, cars driven by Martin Truex Jr., Erik Jones, Jamie McMurray, Ryan Blaney, William Byron, Ryan Newman, and Kurt Busch were among those involved in the crash.

Video of the accident was shared online, picturing cars triggering a large pileup on the track, with users dubbing it "the worst start for a Daytona 500 that I have ever seen in the whole of my life".

"This is the worst start for a Daytona 500 that I have ever seen in the whole of my life." pic.twitter.com/Cg1WwLasOl

​This, however, was not the end of the troubles, as lightning and heavy rain followed the crash, and "The Great American Race" ended up delayed.

Daytona 500, a 500-mile motor race held annually in Florida's Daytona Beach, is considered to be one of NASCAR's big-ticket events.

Last year's Daytona 500 was also marked with a disturbing accident, with a car driven by Ryan Newman hit by another vehicle, flipping several times and catching fire. The driver was hospitalised after the crash but recovered.