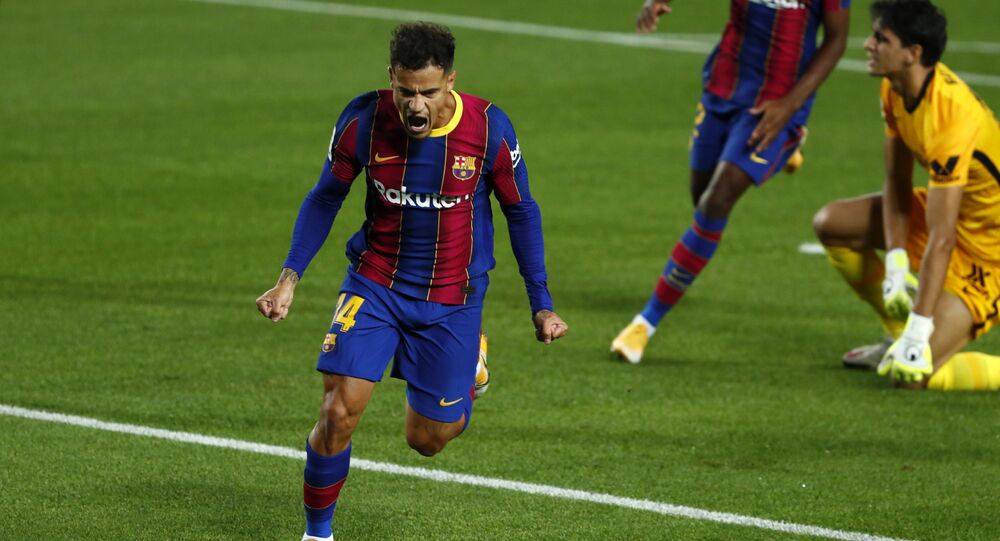 Barca May Put Philippe Coutinho on the Bench to Cope With Financial Problems, Report Says

Earlier this month, Spanish media revealed that Barcelona’s debt has passed the $1 billion mark because of the coronavirus pandemic. Some reports say that one of the most acclaimed European clubs could be on the verge of bankruptcy.

Barcelona might keep Philippe Coutinho on the bench to deal with its financial difficulties, local TV show Onze reported. The Brazilian left Liverpool to join the Catalan giants in the 2017/2018 season for a whopping $144 million but the Reds only receive the whole sum if certain criteria are met, including the number of matches the midfielder plays for Barcelona. According to Onze, Barcelona will have to pay Liverpool $8.4 million if Coutinho appears on the pitch in seven matches. At present the midfielder is sidelined with injury, but reports say he will recover by March.

Barcelona’s financial predicament may force the club to "get rid of" Coutinho to avoid paying millions to Liverpool, Onze adds. This could change of course if other midfielders get injured and manager Ronald Koeman has no one else to fill the gaps.

How Serious is Barcelona’s Financial Problem?

According to data released by the club itself, its total debt has rocketed to $1.3 billion, which prompted it to slash its wage limit for this season. This year the club will only spend $407 million on wages compared with $714 million last year.

Agreements about salary cuts made with the players at the height of the pandemic last spring failed to improve the club’s financial situation. Moreover, the club still owes $154 million to a number of clubs, including Liverpool, for transfer instalments.

Koeman recently revealed that Barca has no money to buy new players.