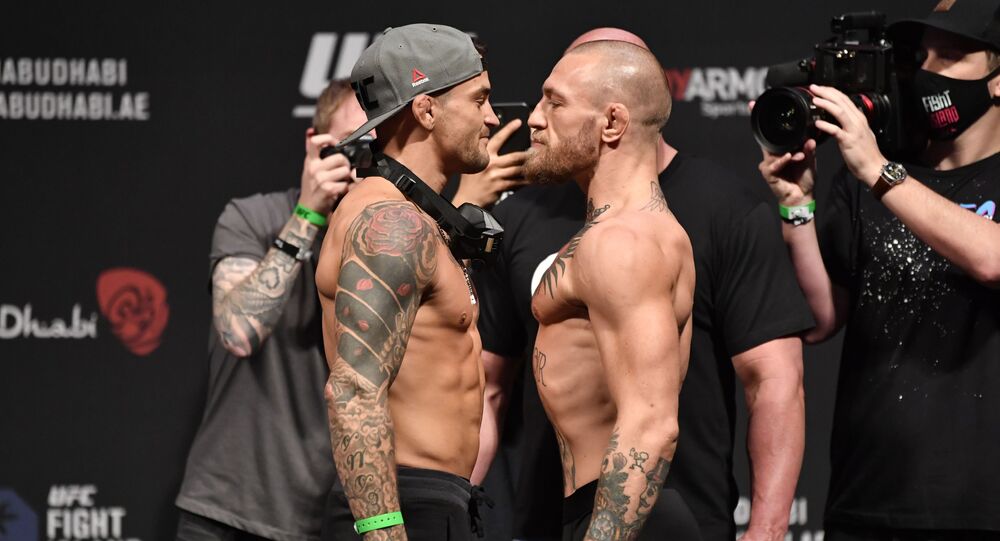 UFC Reveals Prize Fund of McGregor-Poirier Bout, And Its Worth Millions

On January 24, Conor McGregor will face Dustin Poirier in a highly anticipated rematch that is due to take place at UFC's Fight island and both fighters are expected to rake in millions. Their first bout took place back in 2014 at UFC178, with McGregor defeating Poirier in the first round by TKO.

UFC has disclosed the prize fund of the upcoming match of the UFC 257 tournament, in which The Notorious will try to defeat the American Poirier for the second time, the Daily Star reported Saturday.

This time both UFC stars will also earn a slice of the pay-per-view sales, although it is predicted that McGregor's will be much bigger.

Last June, Poirier took home a guaranteed $150,000 for his unanimous decision win over Dan Hooker, but after that victory, the 32-year-old American signed a new eight-fight deal with the UFC and is believed to have earned a substantial pay boost.

This week, McGregor, who is 32 now, reportedly explained why he continues to break his own promises to retire.

"I feel like I’m only starting, man. Everyone wants to say, ‘Hey, Conor, you’ve done it all! You’re so rich! You’re richer than Dana! What are you doing here?’ I want to be here. I want to perform for the fans," The Irishman said.

On how he wanted to be remembered, he added a telling remark. He wanted his name to be mentioned along with such greats as Mike Tyson and Muhammad Ali.

"All the money, all the belts, all that comes and that goes," he said. "You know what lives on? A fighter’s highlights. Look at Roy Jones Jr.’s highlights, Mike Tyson’s highlights. I still look at them today. Ali’s highlights. I want my highlight reel to be like a movie. That’s what I’m after. I’m looking to get in and perform and put on amazing highlights that I can sit as an old man with my son, and just watch back and just enjoy life."

Earlier in the month, UFC President Dana White claimed in an interview that Poirier is a very different fighter from the one McGregor defeated seven years ago.

"I just saw a thing with Poirier yesterday where Poirier is like, 'Let me tell you what. If you think that I’m the same guy that fought Conor last time, you’re out of your mind. You’re going to see a war," he said.  "I believe every word of it. This is the right fight at the right time for both of these guys and I think it’s going to be fun."