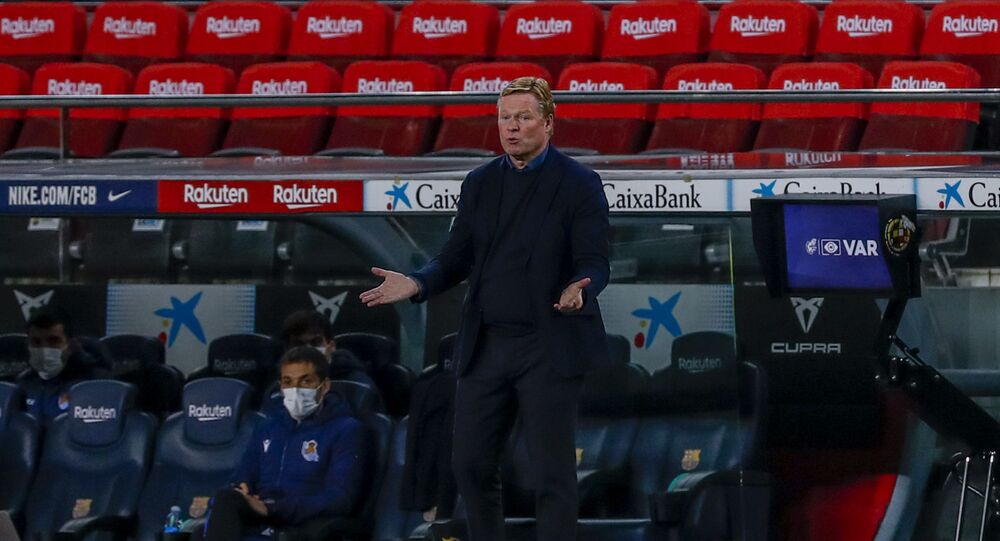 57-year-old Ronald Koeman took over FC Barcelona in August 2020. Under the guidance of the Dutch specialist, Barca has 28 points in 16 league games in Spain and is currently fifth on the table, ten points behind league-leading Atletico FC, who have played only one game less.

The head coach of the Barcelona football club Ronald Koeman says he did not have enough time to instill his vision of football in the team.

"Gradually we are moving towards what I want to see. We tried to prepare the team for the championship, but some of our important players were injured, and I did not have many opportunities to change the team. I need more time to implement my ideas," said Koeman, as quoted by Agence France Presse.

Gerard Pique, Samuel Umtiti, Ronald Araujo and Ousmane Dembele have notably missed matches due to injuries since the start of the season, while midfielder Philippe Coutinho will be unavailable for about three months after leaving to have knee surgery on Saturday.

Koeman also said that he has already decided on a list of potential transfers in January.

"Every time in January, any coach thinks about how to strengthen his team. I have made a plan of ins and outs. If it is possible or not depends on the club. If not, we continue with what we have," the former Barca player said, as he already granted an exit voucher to Spanish midfielder Carles Alena, likely to be loaned to Getafe.

Barcelona had to postpone team training on Tuesday after two staff members tested positive for COVID-19.

Another round of tests was carried out on Tuesday morning but the club reported no further positive cases and training went ahead on Tuesday evening.

"We were calm. There are things in life it is not possible to control", Koeman added.

Barca will face Athletic Bilbao, which is 9th in La Liga with just six wins in 17 matches.