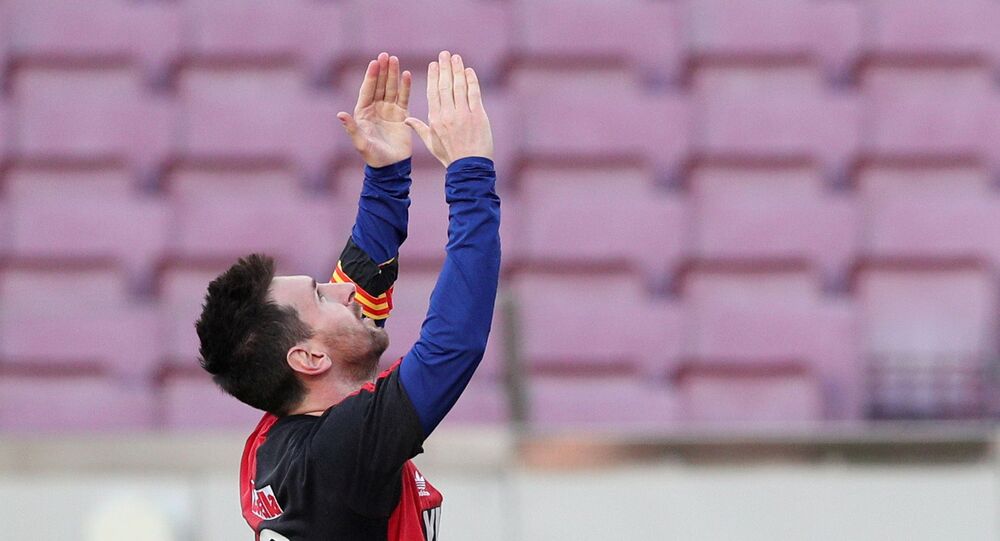 Football legend Diego Maradona died in Buenos Aires on 25 November at the age of 60 due to heart failure. A few weeks before his death, he was hospitalised and underwent surgery for a blood clot in the brain.

The Spanish football federation's competition committee has decided to fine both Lionel Messi and Barcelona after the Argentinian player lifted his jersey to pay tribute to the late Diego Maradona, the outlet ESPN reported.

The incident occurred during Barca's match against Osasuna last Sunday that ended 4-0. Messi received a yellow card after he lifted his jersey that covered another one featuring Newell's Old Boys - one of the clubs where Maradona used to play.

Now, Messi has to pay €600 while his club was fined €180. Barca has protested the fine, saying that it was a gesture of a tribute for the late football superstar.

© REUTERS / AGUSTIN MARCARIAN
Maradona Buried at Cemetery in Bella Vista Near Buenos Aires
The committee agreed with the argument but said that according to Article 93 of the disciplinary code, a player isn't allowed to remove their shirt while celebrating.

The fine on Messi can only be lifted if the booking in the match was an error, the committee added.

Messi played for Newell's Old Boys just as Maradona did, before leaving for Barca at the age of 13.