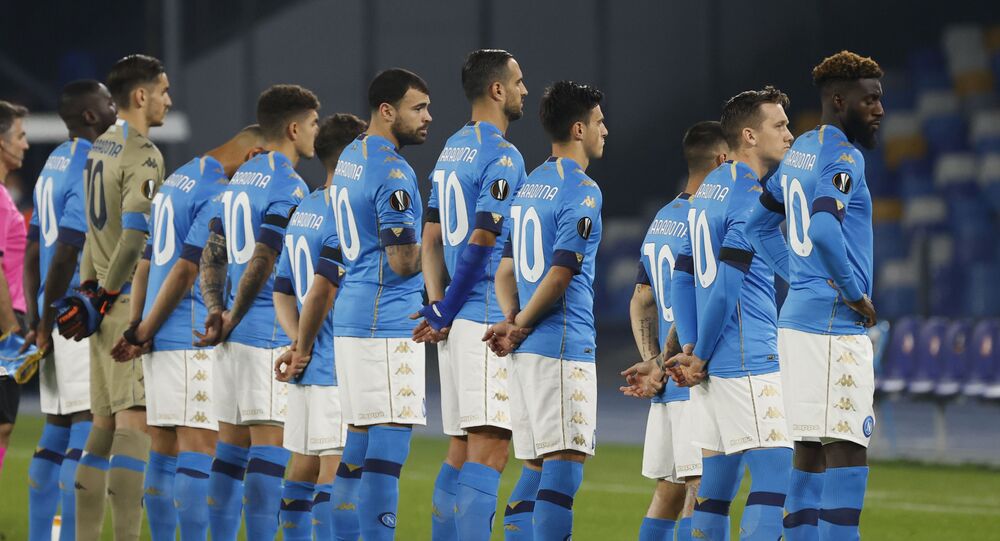 The footballing world has been mourning the death of Argentine legend Diego Maradona, widely considered one of the greatest players of all time, who passed away at the age of 60 on Wednesday having suffered a cardiac arrest, leaving multitudes of fans distraught.

Italian professional football club Napoli, with whom the late Argentinian icon Diego Maradona won two Serie A Championship titles and a UEFA Cup in 1989, paid an emotional tribute to the legendary forward on 26 November.

The Italian club dedicated their 2:0 Europa League win against the Croatian team Rijeka, held behind closed doors due to the coronavirus pandemic, to their greatest ever player at the San Paolo Stadium. All of manager Gennaro Gattuso’s players wore shirts with Maradona’s name and Number 10 on the back instead of their own.

Incredible scenes in Naples tonight, the Italian club with whom Maradona won 2 titles and a UEFA Cup in the 1980s. All the Napoli players take field wearing Diego's iconic Number 10, as fans congregate and set the heavens alight in his memory 🇦🇷🇮🇹🙌 pic.twitter.com/yu7HbNxCeb

​The legendary forward spent the greatest period of his 22-year football career at Napoli, contributing to the Italian club’s first ever Serie A title win in 1987, as well as facilitating Coppa Italia and UEFA Cup successes.

Diego Maradona, who captained his native Argentina to attain World Cup glory in 1986, died from cardiac arrest on 25 November at the age of 60.

Two weeks before his death, Maradona was discharged from a hospital where he had undergone brain surgery to remove a blood clot due to a subdural hematoma.

The announcement of his death sent shockwaves throughout the footballing universe, with thousands of fans assembled in Naples outside the San Paolo Stadium ahead of the Europa League match-up.

Naples ahead of Napoli’s Europa League game against Rijeka, in tribute to the club legend Diego Maradona. Incredible. ❤️ pic.twitter.com/4M80APksOb

​Streets were illuminated with red flares, while flowers, wreaths, shirts, scarves and pictures were left on the fences around the stadium. Fans outside the stadium chanted 'Diego, Diego’ and football anthems to celebrate their icon’s feats.

Incredible tribute to Diego Maradona outside of Napoli's stadium tonight 🙌📸

​Both teams observed a minute’s silence before the match, which saw Napoli outplay their visitors thanks to goals from Matteo Politano and Hirving Lozano. Subsequently, Napoli posted an emotional statement online to voice the city’s undying love for Maradona.

“We can consider the idea of calling our stadium San Paolo-Diego Armando Maradona,” he was quoted as telling French sports channel RMC Sport.

Naples Mayor Luigi de Magistris went on Twitter Wednesday to voice his support for the proposal.

Back in his native Argentina, the funeral ceremony to pay tribute to Diego Armando Maradona was marred by riots and public order violations in the capital, Buenos Aires.

Police forces were mobilised to contain the crowds gathered in the vicinity of the Casa Rosada, the official residence of the Argentinian president, after fans broke fences in a bid to enter the palace, with a source in the Argentine government later saying authorities decided to extend the farewell ceremony until 7:00 p.m. local time (22:00 GMT) amid flaring tensions.

​The Argentine football great was laid to rest at a cemetery in the Bella Vista residential area near Buenos Aires, where Diego Maradona's parents are buried.

Maradona Buried at Cemetery in Bella Vista Near Buenos Aires