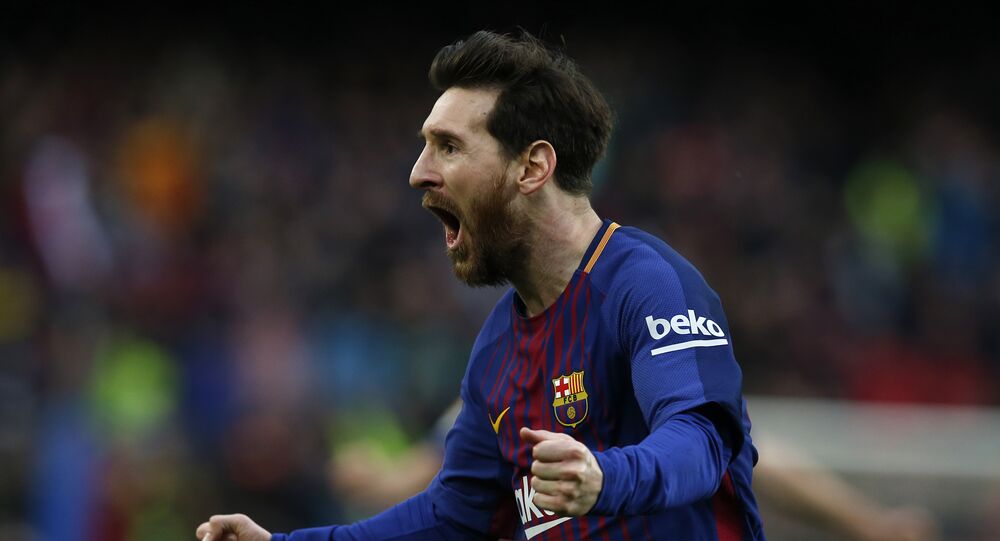 Camp Nou has been gripped with uncertainty ever since its star revealed his desire to leave the club this summer. However, due to disagreements over his contract, Messi was forced to stay in Barcelona. The club’s bosses insist they will do everything to persuade the forward to finish his career in Barca, but reports say Messi intends to leave.

Manchester City has launched another attempt to sign Barcelona’s superstar Lionel Messi and is ready to offer the Argentine a 10-year contract, the Times reported, without citing any sources. Sputnik was unable to verify this claim. Before you exclaim "How on earth will Messi be able to play in the English Premier League after forty", it should be said that the contract offered by the City Football Group, which owns Manchester, stipulates that Messi will perform for the club for just several football seasons. When the club will no longer need his services, Messi will continue his career in other parts of the world, as City Football Group owns clubs in Australia, China, India, Japan, Spain and the United States.

In addition, the contract stipulates that after hanging up his boots, Messi will become Manchester City’s global ambassador, thus forever linking his name with the club. According to the Times, City will attempt to sign the athlete during the winter transfer window.

Will Messi Leave Barcelona In the End?

It’s unclear what goes on in the heart and mind of one of the greatest football players in the history of the sport, but constant bickering with the club’s staff and bosses and Barcelona’s disastrous performance during the last football season made Messi request a transfer. Despite the huge number of clubs wishing to sign the forward, it is likely that only Paris Saint-Germain and Manchester City, owned by Qatari businessman Nasser Al-Khelaifi and UAE sheikh Mansour respectively, will be able to foot the transfer bill, which reports say will include a nine-figure sum.

Barcelona’s bosses previously said that they will do everything possible to persuade Messi to stay. Victor Font, who according to the media will become Barcelona’s new president, recently said he had a conversation with Manchester City’s CEO Ferran Sorriano and told him to forget about Messi.

"Messi will continue with us and will win the Champions League here", Font said as quoted by Barca Universal.

Manchester City’s manager Pep Guardiola, who also coached Barcelona and has a good relationship with Messi, has also weighed in on the issue recently. To the surprise of City’s fans, the acclaimed manager said he would like the Argentine to finish his career at Camp Nou.

"Messi is a Barcelona player. I said it a thousand times. As a fan, I want Leo to finish there", Guardiola said.

At the same time, he acknowledged that he doesn’t know what Messi will do when his contract with Barca ends this summer.

It seems that the future of the football superstar at Camp Nou will depend on Barcelona’s performance this season, specifically whether the club will be able to win UEFA’s Champions League and La Liga. So far it seems that football fans will soon have to buy a subscription to watch the English Premier League…