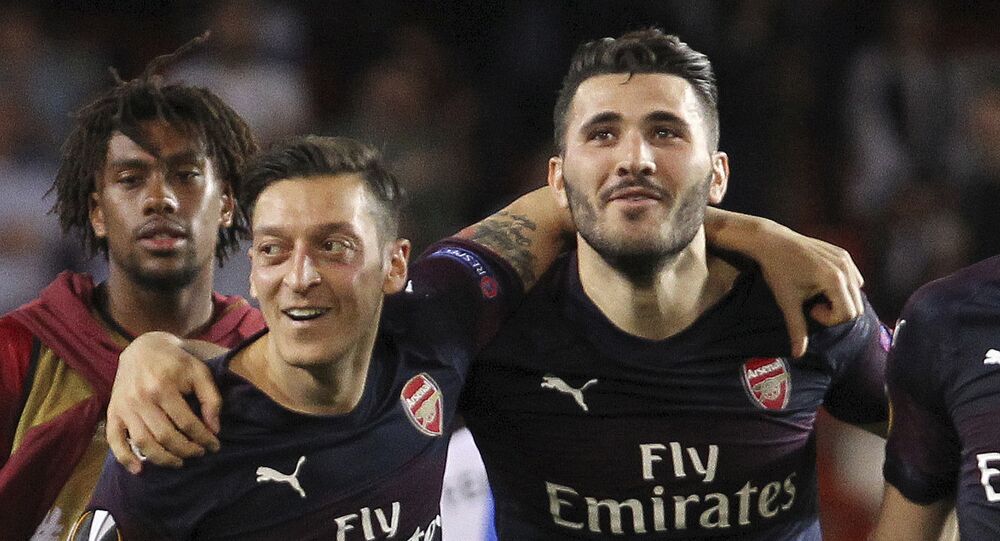 The midfielder was signed by Arsenal in 2013 for $55.7 million, which back then made him one of the most expensive German players of all time. He became an irreplaceable part of Arsene Wenger’s squad and an idol for the Gunners’ fans. However, over the past two years he has fallen out of favour with the team’s managers.

Arsenal star Mesut Ozil caused has sent ripples on social media after he posted a forecast for the Gunners’ game with Aston Villa. The 32-year-old predicted that his club would beat the Lions 2-1 and even wrote which players would score goals.

Prediction tweet: 2-1 for the @Arsenal against a team with a strong goalkeeper and a captain with an amazing technique! Goal scorers: Laca, Auba ... & Grealish. What do u guys think? #YaGunnersYa #COYG #EPL

​However his attempt to chat with fans on social media caused a strong backlash, as Arsenal was thrashed 0-3. The Gunners were surpassed by Aston Villa in every aspect, with Arsenal players managing to make only two shots on target.

Ozil received more than a thousand comments from football fans. Some social media users bashed the midfielder for making predictions and noted that Arsenal’s manager Mikel Arteta won’t include Ozil in the first team.

@MesutOzil1088 is trying to bring disorganization to the team. make mockery of the club to predict scores. this means that Leno/team isn't good enough to keep a clean sheet? how does a player under contract turns himself to @SkySports. he knows he isn't gonna play again.

If i were you I'll stop making this awful predictions because it's becoming irritating... Arteta won't notice you still

Others lambasted Arsenal for their poor performance and said Ozil should terminate his contract with the Gunners over the club’s unfair attitude towards him.

I get that u kinda HAVE to be supportive of ur club, Mesut. Given that they're still employing u, u can't speak badly of them. And ur loyalty is astounding 👏🏽 But they've treated u poorly, tbh. U should terminate ur contract & go where ur talent is appreciated.

I'm sorry but Ozil does not need help making Arsenal a mockery.... unless you missed last night's match...

​Many netizens said they wanted to see the midfielder on the pitch again.

We think you should be brought back to the team to help salvage what’s left of the season. Things don’t look good right now.

​While other users bashed Arsenal’s manager Mikel Arteta and wondered why the Spaniard refused to include the midfielder in the first team.

That coach should be ashamed. Why leave a creative midfielder? Should be fired

l would love to give Mikel a tight slap for dropping you 💔💔🥺😭😭 pic.twitter.com/0OR7kayo34

Over the past two years the German-Turkish athlete has drawn harsh criticism over his statements and behaviour. First, he found himself in hot water over a photo with Turkish President Recep Tayyip Erdogan, which prompted fans of Germany's national team to question his loyalty. Then he raised eyebrows after he ended his international career, accusing the German media and pundits of making him a scapegoat for Germany’s fiasco at the 2018 World Cup in Russia.

In December 2019, he drew the ire of Arsenal’s board of directors after he made a political comment about the alleged mistreatment of Uighur Muslims in China on his social media. In response to the statement, the Chinese TV channel CCTV refused to broadcast Arsenal’s game.

On top of that, he alienated many Arsenal fans after it became known that Ozil had refused to take a 12.5 percent pay cut to help the club weather the coronavirus pandemic, which has caused a huge economic crisis worldwide.

The situation was exacerbated by his unimpressive performance on the pitch, which is partly blamed on his injuries. During the 18 games he played for Arsenal in 2019/2020, Ozil scored one goal and made only two assists.

This football season, manager Mikel Arteta left Ozil not only out of the Europa League squad, but also out of the Premier League squad, which means the athlete won’t appear on the pitch until next summer, when his contract with the Gunners expires. Ozil remains an Arsenal player and his "exile" has not affected his wage (the club pays him $460,000 a week).

The midfielder harshly criticised the club and the manager for not including him in the first team, but at the same time signalled that he is still loyal to Arsenal and wants to return.

"I'm really deeply disappointed by the fact that I've not been registered for the Premier League season for the time being. Upon signing my new contract in 2018, I pledged my loyalty and allegiance to the club that I love, Arsenal, and it saddens me that this has not been reciprocated. As I have just found out, loyalty is hard to come by nowadays. London still feels like home, I still have many good friends in this team, and I still feel a strong connection with the fans of the club. No matter what, I will keep fighting for my chance and not let my 8th season at Arsenal end like this”, he wrote in a statement posted on his Twitter account.

Arteta said his decision is not related to Ozil’s behaviour or statements, but hinted that he is not impressed by his performance on the pitch.