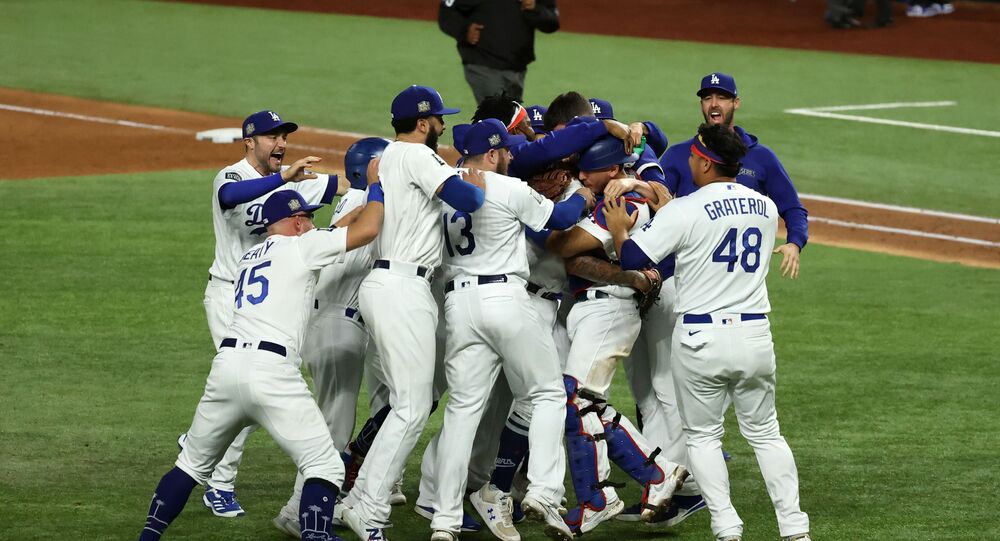 The Los Angeles Dodgers had not won the World Series for more than 30 years, coming into this year’s baseball season finale. For the first time in its history the seven-game play-off was played at a neutral venue.

Social distancing was forgotten for a moment as the players piled on top of each other to celebrate their first World Series win since 1988.

Justin Turner was on the field celebrating the Dodgers' World Series win after he was pulled from Game 6 for testing positive for COVID-19. pic.twitter.com/ZD5eVFbQNu

​The Dodgers’ third baseman Justin Turner had to be pulled out at just before the game after testing positive for COVID-19.

But after the match Turner was on the pitch hugging teammate Clayton Kershaw and sitting next to manager Dave Roberts for a team picture, with a mask pulled down under his beard.

Thanks to everyone reaching out! I feel great, no symptoms at all. Just experienced every emotion you can possibly imagine. Can’t believe I couldn’t be out there to celebrate with my guys! So proud of this team & unbelievably happy for the City of LA#WorldSeriesChamps

Unlike the English Premier League and scores of other football leagues and sporting events around the world, fans were allowed into the venue.

Dodgers manager Dave Roberts was cheered to the rafters as he told 11,000 fans: ”This is our year!”

The World Series is usually contested in home and away legs but this year, because of the coronavirus pandemic, MLB decided the Dodgers and the Rays would play all seven games in a neutral venue.

​They picked the Texas Rangers’ stadium in Arlington, just outside Dallas.

Texas is currently the worst affected state in the US, with 927,000 cases and 18,000 deaths from the coronavirus.

MLB officials isolated teams in “bubbles” after for the play-offs which followed a shortened 60-game season.

​The Globe Life Field, which was only opened last year, has a capacity of 52,000 but this was drastically reduced to enable some form of social distancing.

The crowd included fans from California, Florida and several other states and there are fears that the game could have a similar impact to the Liverpool v Atletico Madrid and Atalanta v Valencia matches in March, which are believed to have acted as “super-spreaders”.

Dodgers fans celebrated victory on the streets of Los Angeles and other California cities on Tuesday night.

Earlier this month the Los Angeles Lakers won the NBA play-offs and officials said this week they believed the street celebrations on that occasion may be responsible for a spike in COVID-19 cases.

The Los Angeles county department of health told USA Today on Monday, 26 October: “It is impossible to determine the exact exposures that contributed to this increase. However, it is highly likely that gatherings to watch and/or celebrate the Lakers, along with any other gatherings that occurred 2-3 weeks ago where people weren’t wearing face coverings and were in close contact with each other, contributed to the rise in LA County cases.”