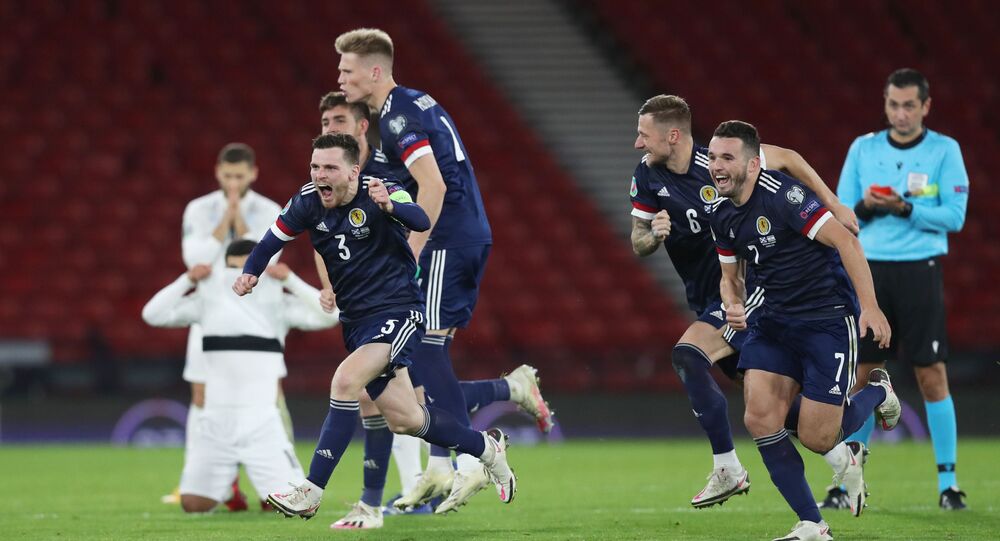 The Euro 2020 tournament was due to take place this summer but was postponed due to the pandemic and is now set to start in June 2021. There are only four places left to fill, by a process of play-off matches.

Scotland beat Israel in a penalty shootout after a goalless draw on Thursday night and now need to beat Serbia in Belgrade on 12 November to make it through to next summer’s European championship finals.

Euro 2020 was postponed, like the Tokyo Olympics, for a year due to the COVID-19 pandemic and if it does still go ahead next June it may well be in empty stadiums.

​But Scotland manager Steve Clarke does not care about that right now, he is focused on the Serbia game.

Victory would mean Scotland qualifying for their first international tournament since 1998.

Clarke, a former Chelsea defender, said: "It its another step forward to hopefully making a bit of history for the country. Qualification is still in our hands. We know we've got a tough game but it is one that we'll look forward to…you can feel the elation in the dressing room."

Scotland’s triumph came after striker Stuart Armstrong tested positive for coronavirus a few hours before the game and his team-mates Kieran Tierney and Ryan Christie were also ruled out after being in close contact with the Southampton player.

​Next month’s other play-off finals will include Northern Ireland at home to Slovakia, Hungary at home to Iceland and Georgia hosting North Macedonia.

It would be the first time either Georgia or North Macedonia have made it to a European championship final.

Northern Ireland beat Bosnia-Herzegovina on penalties after their game on Thursday night in Belfast ended 1-1 but the prospect of an all-Ireland final evaporated after Slovakia beat the Republic of Ireland.

Ireland have not won a game since they made Shane Duffy captain.

Meanwhile, Steven Davis helps Northern Ireland through to the play off final and breaking the record caps for his country along the way!

Northern Ireland will host Slovakia next month in the final! 👏💚 pic.twitter.com/Hdj4O98Sh9

​The teams drew 0-0 in Bratislava and Allan Browne and Matt Doherty then missed spot-kicks as they lost the shootout 4-2.

Republic of Ireland captain Shane Duffy said: "It's a hard one to take at the minute and it is heartbreaking.”

Euro 2020 was due to be a ground-breaking tournament because, unlike previous finals, it was not being hosted by one country but by several nations.

So Georgia or North Macedonia will play in the European Championships next summer. Someone please explain to me how that makes sense.

​If Scotland beat Serbia they will be in a group with England, Croatia and the Czech Republic.

Northern Ireland would play in a group with Spain, Sweden and Poland, while Hungary or Iceland will join the “group of death” with Portugal, France and Germany.

The winner of the Georgia v North Macedonia game will be drawn in a group with Austria, Ukraine and the Netherlands.