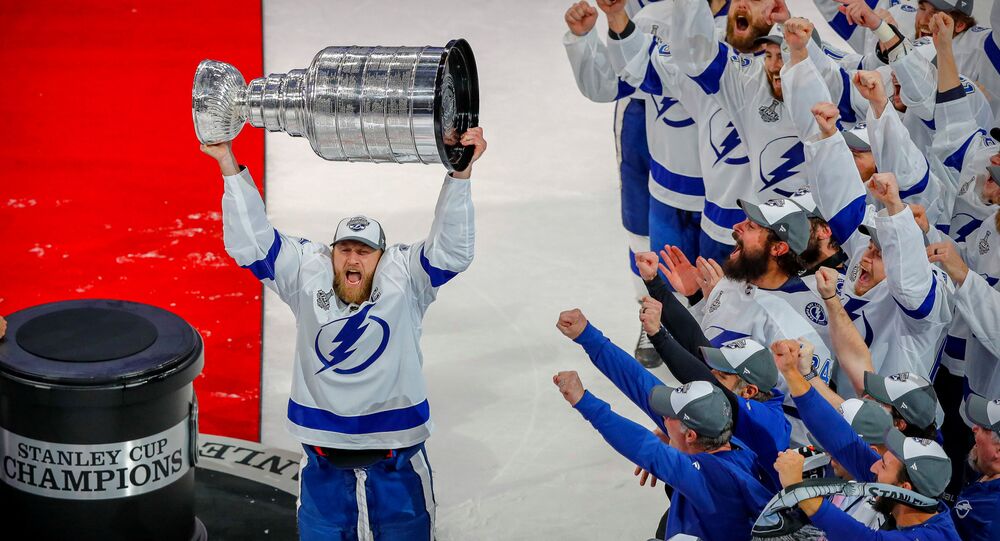 Three of Milstein's clients - Nikita Kucherov, Andrei Vasilevskiy and Alexander "Sasha" Volkov - won the Stanley Cup with the Tampa Bay Lightning on 28 September, concluding a season marred by shutdowns and with the NHL season concluding in a bubble format, in two host cities - Toronto and Edmonton.

The Russians in Tampa persevered through the lockdown, staying in game-shape at home, and months away from their families to win hockey’s most coveted prize, although now bringing it home is complicated by international restrictions and league protocols, Milstein said.

When the NHL season was suspended on 12 March, players faced a number of challenges, including where to spend the virus-induced shutdown and how to maintain peak physical shape, Milstein said.

Some of his clients took off to back their native Russia during this time, while the borders remained open, while others opted to stay.

The biggest struggle for players amid the shutdown was finding ways to stay on top of their game while rinks and team facilities were closed, Milstein said. Keeping players in the prime physical condition and ready for any eventuality, according to Milstein, took an individual approach.

Milstein said that playoff scoring leader and last year's league MVP, Kucherov, fired hundreds of pucks every day in a makeshift home training facility while using YouTube to hone new skills and keep up on the latest league trends. For players in Russia, Milstein says he arranged individual training sessions with top instructors and had his NHL clients provide tutelage in sometimes hours-long virtual meetings.

There were other sacrifices made by players, Milstein said. During the NHL playoff bubble – an arrangement where players and teams are concentrated in one or two cities throughout the duration of the tournament and players are largely confined to living quarters and sports facilities – players were separated from families for nearly two, which also contributed to the uneasiness.

Milstein says despite challenges the players were able to pull together to win, what he says is the hardest trophy to win in professional sports. He also dismisses any notion that this year's Stanley Cup champion will carry an asterisk, as has been suggested by some pundits.

"Well, Stanley Cup is the hardest to win in any of the sports. And unlike in regular years, there was an extra round added to it and [the players] were away from the families so long and there were a lot of sacrifices made", Milstein says. "This is the dream. This is your entire life… the Stanley Cup is the pinnacle of anybody's dreams and it's their career".

When asked about how excited the Russian trio was to win the hockey's most coveted prize, Milstein said that the fiery speech given by the normally reserved Kucherov at the victory parade in Tampa, Florida is all that needed to be said.

There do, however, remain a number of unanswered questions, including an undetermined start to the new season and whether the Russian Stanley Cup winners will be able, as per tradition, to bring the cup back to home, in light of global travel restrictions.

An NHL spokesperson said in a statement to Sputnik, that the start dates for both training camp and the 2020-21 regular season have not yet been set. Milstein says that he is advising his players be on standby, and ready, in every sense of the word, for any development.

Milstein says that he has been in touch with Russian Ice Hockey Federation through his clients and that it stands ready to assist in the Stanley Cup visit to Russia. The Russian Ministry of Foreign Affairs did not respond to a request for comment before the time of publication.

For Milstein, a banker by trade, who built his thriving mortgaging and finance firm Gold Star Mortgage Financial Group from the ground up, began his career as an agent began after being introduced to NHL legend Pavel Datsyuk during his years in Detroit playing for the city’s Red Wings team, the logistical and scheduling nightmare has meant a complete revision of standard operating procedures.

"Last year, in 2019, I'd flown 13 times around the globe – if you added all of my trips – I was always on the go. I spent very little time in one place. This year, everything was done on Zoom", Milstein said. "Nothing ever replaces the human touch… sitting down with a new client or an existing client. There’s something about able to sit in front of them, have a meal with them, talk to them, something a computer can never replace".

For one of the game's top agents who maintains an extensive client base worldwide, the logistical chaos meant that he and his team had to jump through hoops to move players around the world, at a time when even visa procurement is a tall order. He recalled one NHL client had to drive nine hours to New York, spend two days at the airport, fly through multiple European capitals and then take a train to get back to his home in Russia.

Additionally, when the NHL made the decision to postpone the entry draft on 25 March, Milstein says he had to shelve months-worth of preparations.

While the pandemic is clearly affecting the timing, otherwise, Milstein says, it is, for now, business as usual and there is certainly plenty of business to take care of during this unpredictable and likely shortened off-season.

The work begins on with the NHL draft on Tuesday, where Milstein says up to twelve of his clients could be selected, including Rodion Amirov, Vasili Ponomaryov and Mitchell Miller.

Milstein says to keep junior players draft-ready he enlisted the help of his NHL pro clients and, in one circumstance, Toronto Maple Leafs General Manager Kyle Dubas to give advice via video conference, adding that NHL teams were on top of things, hosting multiple events for prospective NHLers.

Milstein also dismissed the notion that the so-called "KHL effect" – there has been speculation of bias against Russian players in recent years because of fears they would choose to play in Russia, essentially resulting in a loss of a draft pick – would have an impact on his clients.

Milstein added that it is "too early to tell" how declining NHL revenue because of the pandemic, will impact player salaries and contract tenures.

While Milstein, who has bought over a number of NHL-ready players, said he wouldn't speculate on which of his clients could have a breakout year next, he sees Konstantin Akulov a forward with HC CSKA Moscow and SKA Saint Petersburg winger Andrei Kuzmenko as established professionals ready to make a splash in the NHL next season.