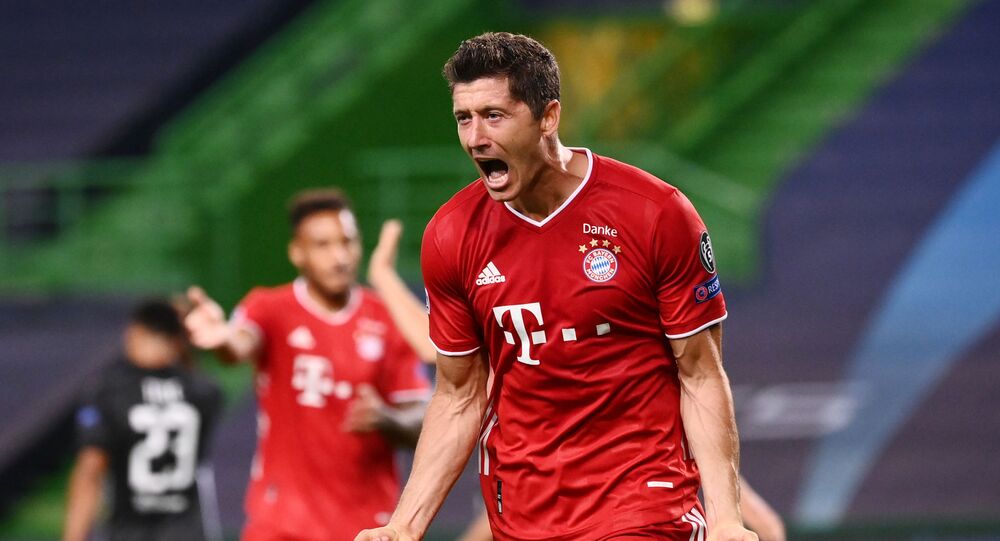 New Delhi (Sputnik): All the major football leagues were shut down in March due to the COVID-19 pandemic, but have returned to play behind closed doors with strict safety guidelines. Europe’s elite club football competition resumed earlier this month.

Football’s biggest game of the season - the 2020 UEFA Champions League (UCL) - final is set to be played between Bundesliga champions Bayern Munich and Ligue 1 winners Paris Saint-German in Lisbon on Sunday.

Two of the tournament's dominating teams will clash behind closed doors at the Estadio da Luz stadium in Lisbon, with no fans due to the government’s guidelines regarding the COVID-19.

After ending a streak of four losses in the semi-final stage with a comfortable 3-0 win over Olympique Lyonnais, Bayern are going for their sixth UCL crown, while PSG are in the final for the first time in the history of the game.

An outstanding and hugely attractive Champions League final lies in store with two of the best attacking teams meeting in Lisbon.

PSG have had the advantage of one extra day to prepare for the game, which may be a factor, but Bayern have arguably been the most impressive team in the competition this season.

Bayern’s goal record is stunning, with 42 goals in 10 games so far and Robert Lewandowski continues to lead the way with his 15 goals. PSG have an impressive attacking trio themselves and their game plan will clearly be to soak up pressure, but hit Bayern on the counter. They will have some success with Neymar, Kylian Mbappe, and Angel Di Maria.

The Bavarians have conceded plenty of chances in all of their three games since the resumption of the Champions League and PSG could certainly score here.

The big question is: “How will the PSG defence and midfield measure up to the formidable Bayern attack of Lewandowski, Serge Gnabry and Thomas Muller?” This may be the best defence that Bayern have faced in their 10 Champions League games this season. This is because they have kept seven clean sheets in their ten matches, and Paris will have to be at their best if they are to win their first-ever final in this competition.

Even with Paris’ superb defence, goals at both ends are likely, so that is the preferred play in this final, with the odds marginally in favour of Bayern ultimately outscoring Paris.

The two teams – PSG and Bayern – have faced each other on eight occasions – all in the Champions League group stages.

The Ligue 1 champions have emerged as the winners on five of those contests, while Bayern have won on three occasions.

This will unarguably be one of the most difficult finals to call, with both sides boasting hugely potent attacking units that can swing a game in their favour on any given day.

Bayern have been incredibly consistent in recent months, clocking up 28 wins from 29 matches since December 2019, which includes an astonishing victory over Spanish giants Barcelona.

The Bavarians won the Bundesliga and the German Cup this season and will be looking to add a treble by winning the Champions League.

On the other hand, PSG have had an incredible season, which saw them win three domestic titles.

If they can triumph in the Champions League final, PSG will snare an incredible fourth trophy for the season – meaning they will have won every competition they have competed in.