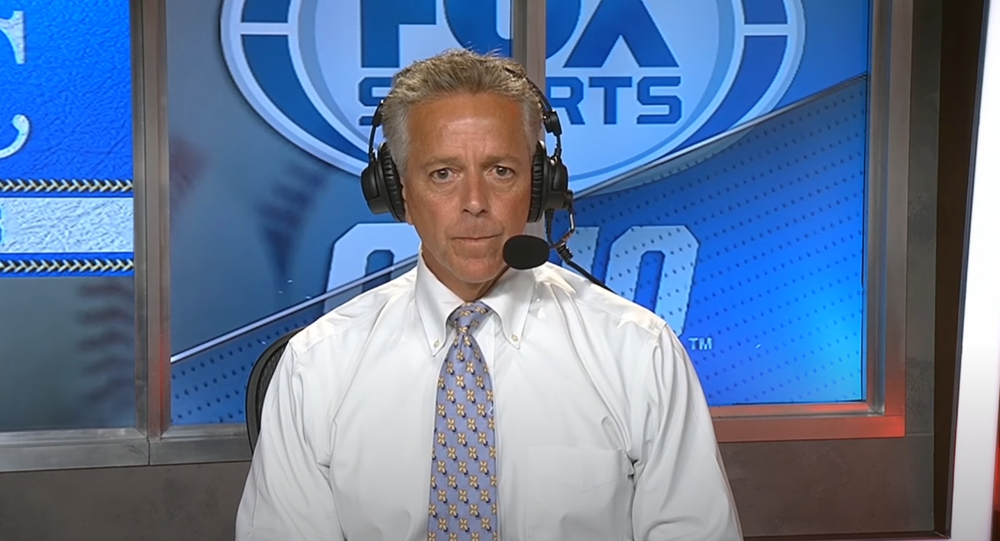 Cincinnati Reds broadcaster Thom Brennaman has been suspended from his duties after a hot mic captured the 57-year-old using a homophobic remark shortly after the Fox Sports Ohio channel returned from a commercial break.

Viewers tuning in to the seventh inning of the Cincinnati, Ohio, Major League Baseball team’s Wednesday night game against the Kansas City Royals overheard Brennaman, a Reds broadcaster since 2006, utter an anti-gay slur.

Be advised, the footage below contains language some audiences may find offensive.

Here's a better video with the full bit of the perceived tHom homophobic comment at around the 2:06 mark of the game. pic.twitter.com/g1yBHg8zA0

“The Cincinnati Reds organization is devastated by the horrific, homophobic remark made this evening by broadcaster Thom Brennaman,” the team said in a statement. “He was pulled off the air, and effective immediately was suspended from doing Reds broadcasts. We will be addressing our broadcasting team in the coming days.”

The team went on to express its “sincerest apologies to the LGBTQ+ community in Cincinnati, Kansas City, all across this country, and beyond.”

Fox Sports Ohio quoted the Reds statement via Twitter and said, “We agree with the Reds decision to suspend him until further notice.”

Brennaman issued his own apology on live TV at the top of the fifth inning of the second game that night, claiming, “I pride myself and think of myself as a man of faith.”

“I can’t begin to tell you how deeply sorry I am. That is not who I am, and never has been,” he remarked, nearly two hours after his comments were made. “I’d like to think maybe I could have some people that, uh, that could back that up.”

He was pulled from the broadcast following the fifth inning.

Retired sportscaster Marty Brennaman, father of Thom and future Class of 2021 inductee into the Reds Hall of Fame, issued a statement on behalf of his son on Wednesday.

"As a dad I hurt for him," Marty Brennaman told the Cincinnati Enquirer. “What he said is not a reflection of who Thom Brennaman is. I know that’s not him. But I also feel terrible for the people the comment offended."

The Reds’ decision comes during the same week John Focke, a first-year radio announcer for the National Basketball Association’s (NBA) Charlotte Hornets, was suspended indefinitely for tweeting out the n-word while commenting on the first game of the Utah Jazz-Denver Nuggets series in the NBA playoffs.

“Shot making in this Jazz-N****rs game is awesome! Murray and Mitchell going back and forth what a game!” he said in a since-deleted tweet on Monday.

Focke issued an apology later that day, claiming that he “mistyped,” but also takes “full responsibility” for his actions. “I’m truly sorry that this happened and I apologize to those I offended.”