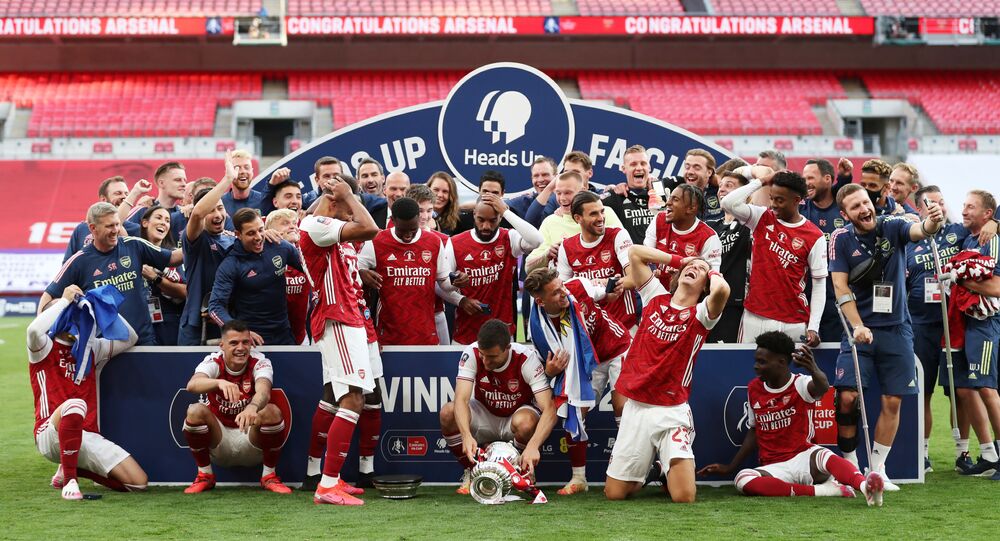 Mikel Arteta’s Arsenal defeated Frank Lampard’s Chelsea to lift the FA Cup on Saturday for a record, extending 14th crown in the competition. The 2-1 win against the 10 men Chelsea earned the Gunners a spot in next season’s Europa Cup.

Arsenal Captain Pierre Emerick Aubameyang, who was clinical upfront and helped his team lift the FA Cup, was left red-faced when he dropped the trophy.

In the video of the celebration, posted by the official handle of Arsenal on Twitter, the Gabon-born star can be seen struggling to get a hold of the trophy while picking it up from the plinth.

He then marches towards his team-mates, who were ready to celebrate. As soon as he attempts to raise the cup, he accidentally drops it onto the pitch, leaving some of his team-mates shocked and others smiling.

The smoothest trophy lift you're ever likely to see?

It wasn’t just the Arsenal players and staff who looked stunned as the captain’s clanger quickly sent the social media into meltdown.

Arsenal need to give Aubameyang a blank check and back support😅😂

Arsenal as soon as they got their hands on the trophy 😂#FACupFinal pic.twitter.com/eVTJg4s9JG

Arsenal manager Mikel Arteta saw the lighter side of Aubameyang's trophy drop after the match, and stated that “He [Auba] needs more experience with trophies! We can get him used to that."

Arsenal had entered into the match after a disappointing premier league season which saw them finish in the 8th spot. The FA cup was the only chance for the Gunners to gain European football for the next season.

Arteta’s men found themselves trailing within the first 5 minutes of the game but the Arsenal captain made the score even from the penalty spot before half-time.

Aubameyang, in the second half, produced a stunning finish to seal the game for Arsenal.

On the other hand, Chelsea didn’t just finish the game with 9 men including a red card, they also saw three of their players, including the club captain, limp off with a hamstring injury.
The FA Cup, known officially as The Football Association Challenge Cup, is an annual knockout football competition of domestic English football. It is the oldest national football competition in the world.