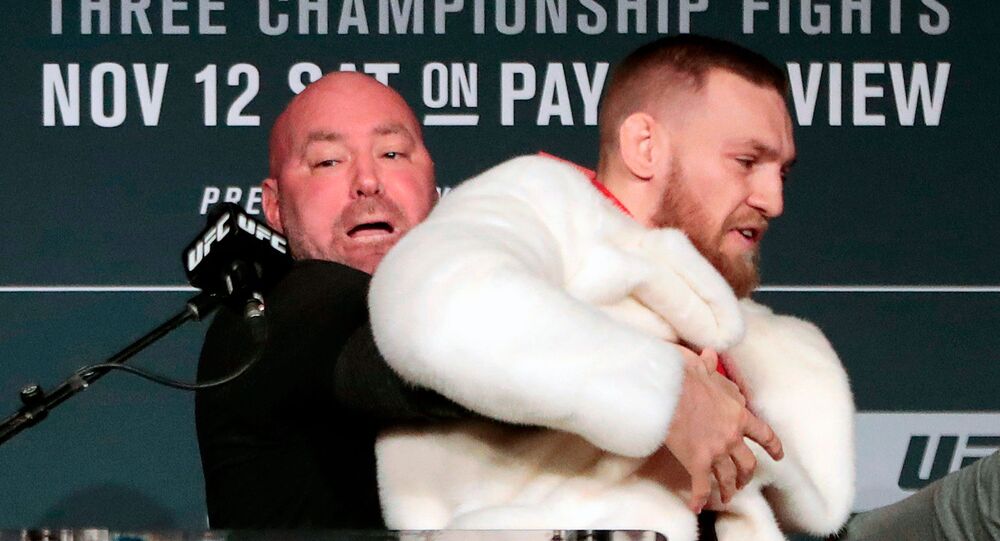 On Thursday Irish professional mixed martial artist Conor McGregor, who announced in early June that he was retiring from fighting, left fans of the Ultimate Fighting Championship (UFC) in confusion after tweeting two words, “I accept”, without providing further explanation.

UFC President Dana White on Friday deciphered a Thursday tweet from retired Irish fighter Conor McGregor, in which the Irish sportsman wrote the text “I accept” without further explanation. White suggested that the tweet was in response to rising UFC star Khamzat Chimaev, after he called out several well-known UFC fighters.

White said that McGregor had expressed a desire to go up against the Swedish fighter of Chechen origin, Chimaev, dubbed the 'New Khabib' due to his successful start in the UFC and the likeness of his fighting manner to that of Russia's Khabib Nurmagomedov, the reigning UFC lightweight champion.

“That was Khamzat,” White told reporters in Las Vegas on Friday. “Khamzat posted, ‘I want Nate Diaz, [Jorge] Masvidal, or McGregor,’ and McGregor said, ‘I accept’. That’s what that was.”

On Thursday, 26-year-old Chimaev tweeted a request aimed at White to create a matchup against the three UFC stars in one night, stating that he was “getting bored” and claiming that he was “confident” he could “smash” all of them.

“I’m getting bored, please @danawhite give me @NateDiaz209 @GamebredFighter @TheNotoriousMMA same night. I can smash all these guys... I’m not cocky guy I’m just confident. I understand if they don’t want to fight me,” tweeted Chimaev, the breakout star of the UFC Fight Island events in July.

I’m getting bored, please @danawhite give me @NateDiaz209 @GamebredFighter @TheNotoriousMMA same night. I can smash all these guys... I’m not cocky guy I’m just confident. I understand if they don’t want to fight me.

Later in the day, the former Irish fighter responded saying, “I accept”.

In response to a reporter's question, White said that he is not interested in a McGregor-Chimaev bout, because the Irish fighter is now retired, adding that even if McGregor returned, there would be many other relevant fights for him.

“No (interest in actually making the Chimaev fight),” White said. “Listen, Conor’s retired, and Conor’s move right now is sit back, wait, and see how this year plays out and see what’s next for him. You know he wants the Khabib (Nurmagomedov) fight. That happens Oct. 24 (against Justin Gaethje). So, we’ll see.”

Talking about Chimaev’s desire to have frequent fights, the UFC head said he does not know what is next for the rapidly rising star, adding that he loves his attitude and mentality.

White said that he would set up fights for Chimaev whenever he asks.

“When this kid wants to fight, I’m gonna make it happen. I love guys with that mentality. This guy’s the real deal,” White enthused. “Do you guys realize that the kid we matched him up with from the U.K., the last fight he had, that dude is a badass. That guy is legit. Don’t let the way the fight played out fool you. That kid was very good and [Chimaev] made him look not very good. This guy’s at a whole other level. This dude is real.”

In July, Chimaev, born in Chechnya but taken with his family to Sweden at the age of 16, had two fights in the UFC in 10 days (15 and 25 July), achieving two victories. He now has eight victories in a row.

On 7 June, Conor Mcgregor announce via social media that he was retiring from fighting.

Hey guys I’ve decided to retire from fighting.
Thank you all for the amazing memories! What a ride it’s been!
Here is a picture of myself and my mother in Las Vegas post one of my World title wins!
Pick the home of your dreams Mags I love you!
Whatever you desire it’s yours ❤️ pic.twitter.com/Dh4ijsZacZ

Dustin Poirier Hints at How Gaethje Could Defeat Khabib