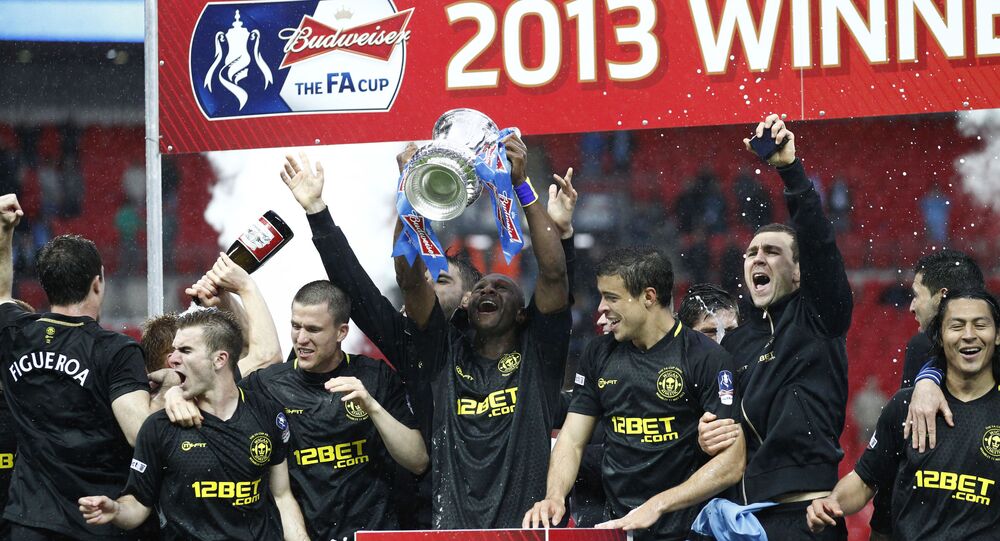 In 2013 Wigan Athletic were in the English Premier League and won the FA Cup, beating Manchester City. But they went into administration last week and now questions are being asked about the financial health of several other English football clubs.

The Shadow Foreign Secretary and the Mayor of Greater Manchester have both called for an investigation into the collapse of Wigan Athletic, who went into administration last week.

Lisa Nandy, who is also the Labour MP for Wigan, joined Andy Burnham - a former Cabinet minister under Gordon Brown - in demanding the government and the football authorities answer "serious questions" about the way the club was run.

​In a joint letter to Oliver Dowden, the Secretary of State for Digital, Culture, Media and Sport, Nandy and Burnham wrote: "This shocking turn of events has left the public of Wigan bewildered and their fate of their football club hanging in the balance."

Wigan Athletic - traditionally a small club from a town which was better known as a rugby league stronghold - enjoyed a decade of success under chairman Dave Whelan, a multi-millionaire retail tycoon and boyhood fan of the club.

​Whelan invested millions in the team and got them promoted to the Premier League in 2005.

They were relegated in 2013 and Whelan’s grandson David Sharpe sold the club to a shadowy Hong Kong-based company, the International Entertainment Corporation, five years later.

In May IEC agreed to sell the club on to another Hong Kong-based shell company, Next Leader Fund, and the English Football League approved them as “fit and proper persons” only days before the club entered into administration.

​Under the league’s rules Wigan face a 12-point penalty, which would almost certainly lead to their relegation from English football’s second tier.

On Friday, 3 July, a secretly recorded video clip appeared on social media in which EFL chairman Rick Parry can be heard discussing a rumour that one of the club’s owners had made a bet in the Philippines on Wigan being relegated.

The Wigan debacle has once again cast doubt on the UK football authorities’ ability to stop clubs falling into the hands of owners with questionable business plans.

Last year Bury FC - who are based in a suburb of Manchester only a few miles from Wigan - went out of existence altogether after their owner Steve Dale failed to come up with the money to save them.

So which club’s fans are worried about them going the same way as Wigan or Bury ?

London club Charlton Athletic were in the Premier League from 2000 to 2007 but have struggled in the last 10 years and are currently towards the bottom of the second tier of English football.

In 2014 the club were taken over by Roland Duchatelet, a Belgian electronics tycoon who also owned another famous name in football - Standard Liège.

​But Duchatelet soon became a hate figure for Charlton fans, who believed he was deliberately running them into the ground.

In January this year Duchatelet finally agreed to sell the club but he retained ownership of the stadium and the training ground and it recently emerged that the club owe him £50 million.

Standard Liège - who were sold by Duchatelet in 2015 - had their licence to play revoked this year because of their financial difficulties.

In 2012 Birmingham City were relegated from the Premier League and two years later their owner, Carson Yeung, was jailed for six years in Hong Kong after being convicted of money laundering.

Yeung eventually sold the club, in 2016, to a consortium called Trillion Trophy Asia, which is controlled by Hong Kong businessman Paul Suen.

According to The Blues' own website Birmingham Sports Holdings Limited(BSHL) owns 96 percent of shares in Birmingham City FC and Trillion Trophy Asia - which is incorporated in the British Virgin Islands - owns 30 percent of the shares in BSHL.

​A Cambodian businessman, Vong Pech, owns 25 percent of BSHL and another 18 percent is owned by Dragon Villa, a company run by Lei Sutong, a shadowy businessman.

Birmingham’s manager, Pep Clotet, has announced he will be leaving at the end of the season and some fans fear for the long-term future of the club.

Birmingham fan Daniel Ivery said: "Birmingham City’s biggest problem is that with no season ticket revenue and commercial revenue coming in at the moment due to the coronavirus outbreak, they are hugely dependent on infusions of cashflow from their Hong Kong parent company, Birmingham Sports Holdings."

"This is problematic for the club as BSH have confirmed in their own accounts that they themselves have had to rely on loans from unknown third parties for working capital. BSH’s dependence on borrowing along with the fact that so little is known about the major shareholders in BSH means that Birmingham fans have every right to be concerned for the club’s long-term future," he added.

Hull City were relegated from the Premier League in 2017 and next season will be their first without the valuable “parachute payments”.

The club’s Egyptian-born owner Assem Allam - who went to university in Hull and later set up a thriving engineering business there - has been looking to sell the club for several years.

​He took the club over in 2010 and took them to the Premier League and to an FA Cup Final in 2014 - which they lost to Arsenal - but he fell out of favour with the fans when he tried to rename them Hull Tigers.

Struggling for cash and now of course hit by the coronavirus crisis and the lack of spectators at games, Hull have sold off most of their best players this season - striker Jarrod Bowen joined West Ham and Polish winger Kamil Grosicki joined West Brom - and could be relegated to the third tier of English football later this month.

The Hull Daily Mail said that if they did get relegated their revenue stream would fall from £7 million a year to £1.5 million and with Mr Allam no longer willing to put money into the club, they could face financial oblivion.

Sheffield Wednesday’s Thai owners have carried out all sorts of financial stunts in order to keep the club in the black.

The club sold their Hillsborough stadium for £60 million to owner Dejphon Chansiri, whose family made their fortune in canned tuna in their native Thailand.

2/2 with the exception of Iorfa the investments made look like poor decisions. Then we have Jos. And the worst thing is now we face a points deduction. If we signed absolute stars then I would accept a gamble was made and it backfired. Chansiri out before monk for me. #swfc https://t.co/8NBxyCXt0a

​Wednesday’s rivals have claimed that without the stadium sale they would have posted a pre-tax loss of £35.4 million and breached the EFL's Profitability and Sustainability regulations.

Wednesday - who were relegated from the Premier League in 2000 - are one of the oldest and most famous clubs in England.

If an independent EFL panel finds them guilty of misconduct they, like Wigan, could face a points deduction and could face relegation to the third tier.

Bournemouth - a small club with a tiny stadium - shocked everybody by winning promotion to the Premier League in 2015 and then staying there for several seasons.

​But they look doomed this season, having lost all four games since the season restarted, conceding 12 goals and scoring only two.

Relegation will put them under financial pressure and will test the commitment of the club’s owner, Russian businessman Maxim Demin.