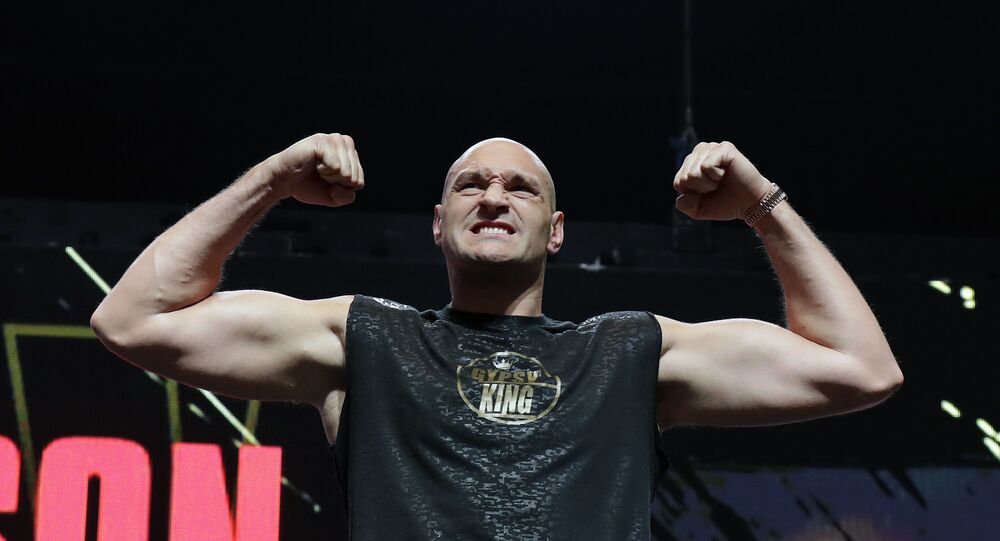 Anthony Joshua holds the WBA, IBF and WBO world heavyweight championship belts, while Fury is the reigning WBC champion. The pair are both British but the fight may take place in Dubai.

Britain’s Tyson Fury has signed an agreement to fight Anthony Joshua in a heavyweight title unification fight next year but questions are being asked about the man in the middle of the deal.

On Wednesday, 10 June, Tyson Fury tweeted a "massive thanks" to Daniel Kinahan "for making this happen."

Taoiseach tells the Dáil that there has been "contact" between the Department of Foreign Affairs and authorities in Dubai over Tyson Fury V Anthony Joshua boxing match and it's involvement of Daniel Kinahan. #iestaff

It’s official FURY VS JOSUAR AGREED FOR NEXT YEAR, I got to smash @bronzebomber first then I’ll annihilate @anthonyfjoshua #WEARESPARTANS

MASSIVE THANKS TO DANIEL KINNERHAN FOR MAKING THIS HAPPEN.🙏🏻👍🏻 god bless pic.twitter.com/18FfVKfCax

​Kinahan is a Dubai-based businessman who formed the MTK boxing stable and has no criminal record but the Irish media say he inherited a ruthless drugs cartel from his father Christy and has been involved in an underworld feud since 2015 with Gerry “The Monk” Hutch which has claimed 20 lives.

Niall Shanahan, from Dublin, said he feared the Fury-Joshua fight would be targeted by underworld enemies of Daniel Kinahan.

Mr Shanahan told Sputnik: "His gang have terrorised this country over the past decade. His family are not only responsible for murdering infinite amounts of people - including innocents - but are largely responsible for the heroin epidemic on our streets that has killed so many. He's a scumbag and people aren’t willing to let him reinvent himself as some sort of legitimate businessman."

In February 2016 a rival gang stormed the weigh-in for a European lightweight title fight in Dublin between one of Kinahan’s fighters, Jamie Kavanagh, and Antonio João Bento.

Four masked men - two of whom were disguised as police and armed with AK-47 rifles, shot dead David Byrne, an associate of Kinahan, and injured several others.

Residents of Ballsbridge,one of Dublin’s more wealthy area’s,woke up to this graffiti this morning.The anti-Daniel Kinahan slogans were sprayed on Pembroke Lane which runs behind Dublin’s Dubai Embassy on Pembroke Road..One resident asked me who is Daniel Kinahan!!! pic.twitter.com/A61k8dV6Fa

​Daniel Kinahan was reportedly the intended target but he left the weigh-in early.

Last year Patrick Hutch, 25, walked free after his trial for murder and possession of firearms collapsed.

Between September 2015 and May 2019 there have been 19 other murders in the Kinahan-Hutch feud.

Fury’s former trainer Ben Davison told the Irish Sun newspaper that Fury was grateful to Kinahan for clearing a way a lot of obstacles to his boxing comeback and he added: "Daniel gave him the footings to start again, a positive outlook and a pathway back to the top. It was huge for Tyson."

​Fury won the heavyweight title back in February when he beat America’s Deontay Wilder in a rematch and the pair are due to have a third fight later this year, possibly in Australia.

But Fury is apparently so confident of victory that he has already agreed to fight Joshua, possibly in Dubai.

On Wednesday graffiti was sprayed on a wall close to the United Arab Emirates’ embassy in Dublin.

Just a few reasons why Daniel Kinahan should have nothing to do with any sport and why boxers who support him should be ashamed. pic.twitter.com/lkzsdAiJvL

​Asked about Kinahan’s alleged criminal connections, Fury’s co-promoter Bob Arum, a former federal prosecutor, told the Sun: “I’m not naive…Nobody has come to me, nobody has questioned me. Anything that went before, allegedly went before, that’s none of my business.”

Fury’s other promoter, Frank Warren, survived being shot outside a boxing venue in 1989. One of his former fighters, Terry Marsh, was acquitted of attempted murder in 1990.

There has never been any suggestion Warren himself has any ties to organised crime.

Daniel Kinahan's name came up during a race-fixing trial in London in 2007. Former champion jockey Kieren Fallon and businessman Miles Rodgers, an associate of Kinahan, were eventually cleared of trying to fix horse races for a betting syndicate.