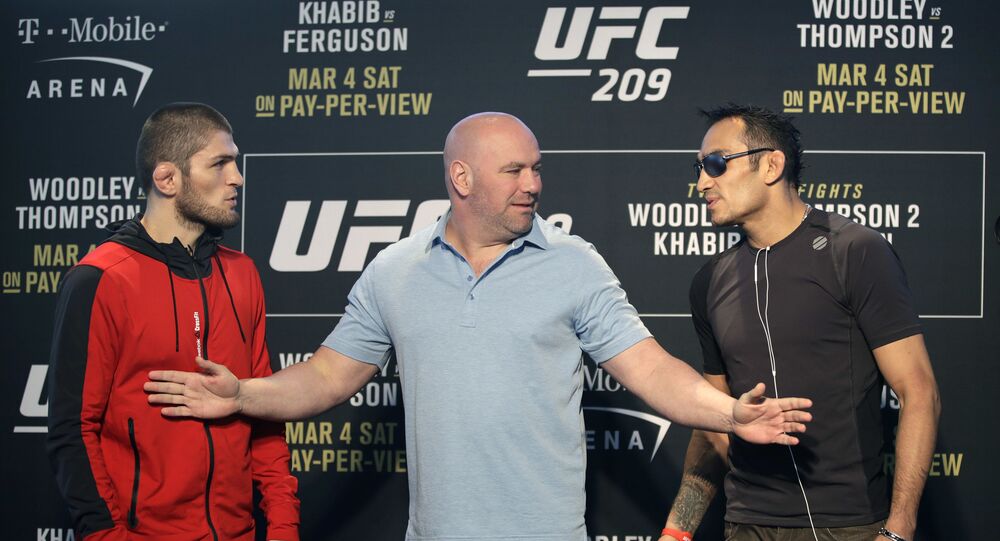 The novel coronavirus (COVID-19) pandemic has prompted travel restrictions and the cancellation of public gatherings across the globe as governments fight to curb the spread of the deadly disease. UFC events were also cancelled.

The Ultimate Fighting Championship (UFC) is returning to the spotlight after a lengthy absence brought about by the COVID-19 pandemic, with three UFC 249 events in seven days amid the coronavirus lockdown, the group's promotion company announced in a Friday press release.

The three events are scheduled to take place at the VyStar Veterans Memorial Arena in Jacksonville, Florida, on Saturday 9 May, Wednesday 13 May and Saturday 16 May.

“I can’t wait to deliver some great fights for the fans,” remarked Dana White, UFC president.

The three shows are planned without a live audience, with only essential video, catering and production crew personnel to be present.

“Thanks … for getting this thing done and giving us a venue to put on these incredible cards, as well our media partners including ESPN and ESPN+, for bringing it to fans. My team is ready to go and the fighters are excited to get back in there with these back-to-back events,” the UFC president stated.

The 9 May event will feature a matchup between Tony Ferguson and Justin Gaethje for an interim championship belt, replacing Ferguson’s planned fight against Russian national Khabib Nurmagomedov, who will not attend the Florida event following pandemic travel restrictions.

The Nurmagomedov-Ferguson lightweight title bout has fallen through six times due for various reasons, including the outbreak of the deadly coronavirus.

According to UFC projections, the winner of the Ferguson-Gaethje fight, receiving an interim championship belt, will face Nurmagomedov in a title unification fight later this year.

The first event will feature a fight card between Henry Cejudo and Dominick Cruz for the bantamweight title.

Cards for the other two events have not yet been announced.

The mayor of Jacksonville described the UFC online event performance as a step “on the path toward economic recovery” during the COVID-19 outbreak, claiming that staging the event despite the current lockdown measures in place to slow the spread of the disease is “safe and sensible”.

Earlier, Florida had allowed the WWE to resume activities behind closed doors in a claim that the move would kickstart the US economy.

“As we move step-by-step on the path toward economic recovery, we are proud to host these UFC events at the Vystar Veterans Memorial Arena,” Curry suggested. “With Jacksonville continuing to outpace other cities and regions, we are excited to continue to lead as host to these world-class, international sports entertainment organizations”.

Florida boxing director Cunningham said that his group would oversee the three events, and welcomed future collaborations with the international entertainment promotion company.

“Health and safety protocols will be in place to ensure the safety and wellbeing of all individuals who are helping to make these events possible,” Cunningham asserted. “With this triple date feature of UFC events coming in May, Florida is continuing to build a strong collaboration with UFC that sets the foundation for more opportunities that we hope UFC will choose to host in our state in the months to come”.

UFC Head Confesses to Having Problems With Organising Khabib-Ferguson Fight