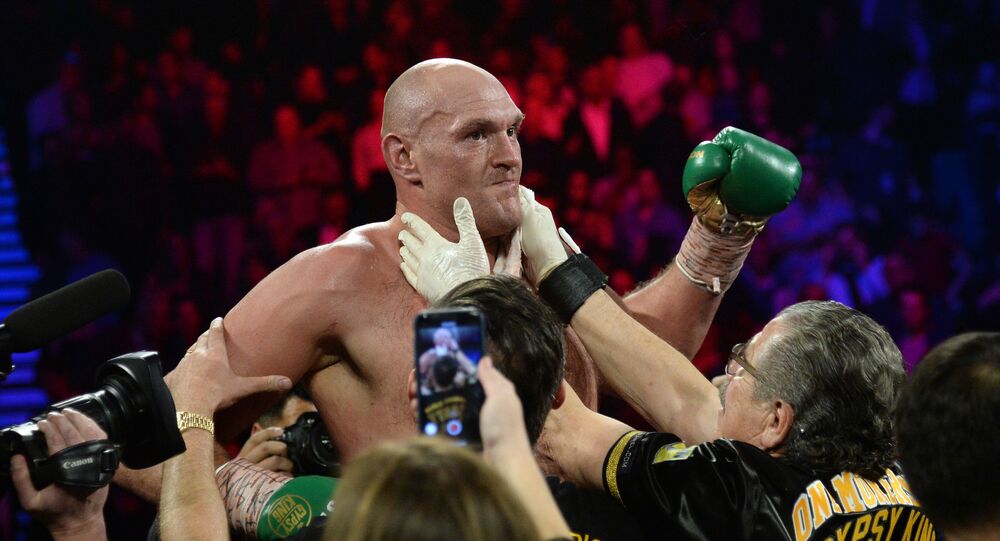 MOSCOW (Sputnik) - A team member of UK boxing champion Tyson Fury attempted to bribe a farmer for lying that he had sold wild boar meat to the athlete, so that the latter could explain his failed doping test in 2015.

In November 2015, Fury defeated Ukraine's Wladimir Klitschko, winning four world heavyweight titles, but then his earlier doping tests returned positive, and the British Boxing Board of Control temporarily suspended the athlete's license until the completion of the doping investigation.

In 2017, the UK Anti-Doping announced a backdated two-year suspension of Fury and his cousin Hughie Fury, who also failed doping test.

According to The Mail On Sunday, the two boxers explained the presence of anabolic steroid nandrolone's metabolites in their samples by having eaten wild boar meat or "contaminated" supplements and stated that they had never intentionally taken doping.

Farmer Martin Carefoot told the newspaper that he was then asked to lie that he had supplied wild boar meat to the Fury team. He then signed a testimony in which he stated that he was the supplier, although he actually never dealt with wild boar.

© REUTERS / STEVE MARCUS
Fans Clamour for Tyson Fury to Fight Antony Joshua but Wilder Could Trigger Rematch Clause
Carefoot claims that he was offered 25,000 British pounds ($30,675) for his lies, but was never paid.

"You are relying on the word of a liar. Did he lie back then or is he lying now? This is a man who was willing to commit perjury", he told the newspaper.

The eccentric boxer resumed his career in June 2018 and went on to defeat Deontay Wilder via technical knockout on 22 February this year, winning the WBC heavyweight world title. His undefeated career record now stands at 30 wins and one draw.