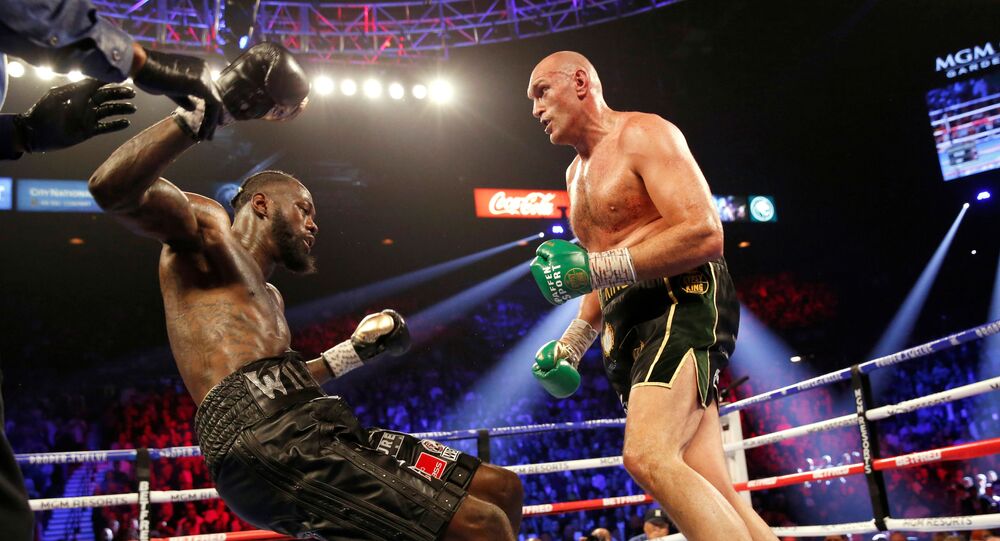 Anthony Joshua holds the WBA, IBF and WBO heavyweight titles after winning his rematch against Andy Ruiz in Saudi Arabia. The other belt - from the WBC - is now held by fellow Brit, Tyson Fury, and boxing fans are hoping the pair will meet for a unification clash.

Tyson Fury flies home from Las Vegas this week, knowing he has the boxing world at his feet.

Although he only has one of the four heavyweight championships belts, Fury is unbeaten - unlike Joshua - and his promoter, Frank Warren, will demand at least a 50/50 split if he enters negotiations for a unification fight with Joshua's promoter, Eddie Hearn.

Boxing fans on social media are clamouring for Fury to fight Anthony Joshua in an all-British fight, with the winner becoming the undisputed heavyweight champion of the world.

No need to see #furywilder3, Fury is 2-0 against Wilder now in most fans eyes. #JoshuaFury will be the biggest heavyweight fight in recent history https://t.co/RZX6E4a9C0

​The last undisputed heavyweight champion was Britain’s Lennox Lewis, who was crowned in November 1999 after he won a rematch against American Evander Holyfield.

Lewis, Holyfield and another boxing legend, Mike Tyson, were in the ring on Saturday night just before Fury demolished the previously unbeaten Wilder in seven rounds.

​Wilder and Fury fought for the first time 15 months ago and it ended in a controversial draw. Most boxing journalists and pundits thought Fury won the fight on points but he was knocked down in the last round and did well to get up.

The majority of boxing writers expected Wilder, with his phenomenal power, to win the rematch but he was outboxed from the start by the 31-year-old Englishman, who prides himself on his traveller heritage and Gypsy King moniker.

🗣 “Let’s go straight into the fight in the summer” - @EddieHearn

​Under the terms of the lucrative contract the pair signed, Wilder has 30 days to trigger another rematch clause.

Although there is little demand for Fury-Wilder 3 right now, the 34-year-old Alabama-based fighter might weigh up his options and think differently when he has recovered from his battle wounds.

Pure class from @BronzeBomber after that fight. RESPECT.

Let’s do #FuryWilder3 before AJ gets a shot at either. These two are for real, AJ is not.

That could explain why his balance was affected and he was unsteady on his feet in the fourth, fifth and sixth rounds. His corner finally threw in the towel in the seventh, with Wilder pinned to the ropes by Fury.

​If Wilder does not exercise the rematch clause then the calls will grow for a unification bout against Joshua in the summer.

But sadly boxing politics may once again intervene.

Each of the sport’s governing bodies - disparaging called the “alphabet guys” by boxing fans - has their own list of contenders and Joshua has been ordered by the IBF to defend their belt against Bulgaria’s Kubrat Pulev.

🇬🇧🏟️ Eddie Hearn was at Tottenham's Stadium on Monday for meetings about hosting Anthony Joshua vs Kubrat Pulev. Reiterated to me that it'll either be there or at Arsenal's Emirates, should be finalised by the end of next week.

​Pulev has only lost once - he was knocked out by Wladimir Klitschko in 2014 - but he is unexciting and uncharismatic and few boxing fans want to see him in the ring with Joshua.

British boxing fans definitely want to see Fury fight Joshua in London - possibly at Wembley Stadium - but it is possible that they would meet each other in Las Vegas or even in Saudi Arabia, which offered a huge sum to stage the Joshua-Ruiz rematch.

Joshua vs. Pulev
Joshua also drops the IBF title for Usyk vs. Parker???

The heavyweight division ain't being unified for a LONG time

​If Fury-Wilder 3 does go ahead then it may well take place in Britain, possibly at Manchester United’s Old Trafford stadium, and the winner would fight Joshua, assuming he came through his title defence against Pulev.

Either way 2020 is set to be a very exciting year in heavyweight boxing.