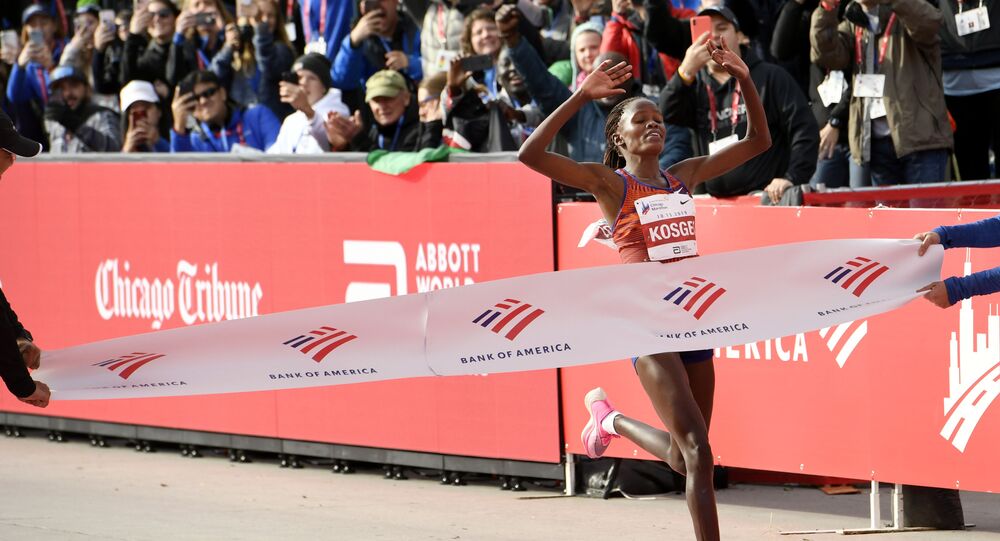 As Nike’s Hi-Tech Shoes Allowed in Tokyo Olympics Will There Really Be a ‘Level Playing Field’?

Last week World Athletics said it would allow professional runners to wear Nike's controversial Vaporfly range but would bring in tighter regulations around hi-tech running shoes. When the Olympic Games kicks off in Tokyo in July will some athletes be disadvantaged?

Nike has responded to World Athletics banning the Alphafly prototype trainers worn by Eliud Kipchoge when he broke the marathon record in October by bringing out a variation which dips just inside the rules.

On Wednesday, 5 February, Nike unveiled the Air Zoom Alphafly Next% which it said would be legal when they are released in the summer and could therefore be worn by athletes in the Tokyo Olympics.

Nike said the Vaporfly had a "built-in secret weapon that provides a propulsive sensation" and improves running economy by four percent - shaving around 90 seconds off an elite marathon runner’s time -  but there are some suggestions the Alphafly Next% could improve running economy by up to eight percent.

​Athletes wearing them took 31 of the 36 top-three finishes in the world’s top marathon races last year but Kenya’s Brigid Kosgei, who broke the women’s world marathon record wearing a prototype variant of the Vaporfly, said: "The shoes did not have legs to run, it is the power and energy of an athlete. Not every athlete who wore the shoes ran a world record."

© AP Photo / Stringer
Eliud Kipchoge's mother Janet Rotich, seated 2nd left wearing a headscarf, watches on television and celebrates her son's sub-2 hour marathon time, with friends and neighbors, in Kapsisiywa village in the Rift Valley of Kenya Saturday, Oct. 12, 2019. Eliud Kipchoge sent shockwaves through the world of sport by becoming the first athlete to break the two-hour barrier for a marathon, at an event set up for the attempt in Austria, although it will not count as a world record.

What are the implications for the Olympic Games, which kicks off in Tokyo in five months’ time, and are we entering an era where athletics will increasingly resemble Formula One with the winner being the one equipped with the best technology?

​Jonathan Gault, staff reporter at Letsrundotcom, said he did not believe any shoe had changed the sport so much since the Puma Brush Spikes, which were banned after US athlete John Carlos broke a world record in the 200 metres at the trials for the 1968 Olympics wearing them. They were banned before the Games in Mexico City.

​Skechers are the latest brand to launch a hi-tech shoe, the GOrun Speed Elite Hyper, following in the footsteps of Nike, Saucony, Brooks and Hoka One One.

World Athletics has ruled from 30 April 2020 any new running shoe worn by competitors must have been available for purchase by any athlete on the open market for at least four months.

That means that competitors will not be able to turn up in Tokyo and get a competitive edge with shoes which have been secretly designed for them.

​On Friday, 31 January, World Athletics President Sebastian Coe said: “It is not our job to regulate the entire sports shoe market but it is our duty to preserve the integrity of elite competition by ensuring that the shoes worn by elite athletes in competition do not offer any unfair assistance or advantage. As we enter the Olympic year, we don’t believe we can rule out shoes that have been generally available for a considerable period of time, but we can draw a line by prohibiting the use of shoes that go further than what is currently on the market while we investigate further.”

He said the new rules would allow athletes to prepare for Tokyo while "addressing the concerns that have been raised about shoe technology.”

Under the new rules shoe soles must be no thicker than 40mm and the shoe must not contain more than one rigid plate or blade.

Many athletes have signed sponsorship deals with running shoe manufacturers and are obliged to wear their sponsors’ shoes in all races.

That potentially means that those athletes who are sponsored by Nike would have an unfair advantage over other runners at the Olympics.Other manufacturers are believed to be developing their own running shoes which would have a carbon plate similar to Vaporfly.

Mr Gault said: “Historically Nike signs a lot of athletes. They are the most powerful company and have the most resources. But not all the best runners go to Nike. Some prefer Adidas shoes, or Saucony or New Balance. But if this gap grows we could see more top athletes choosing to sign with them.”

Vaporfly and similar brands are designed for long-distance runners. Sprinters and other stadium athletes do not wear trainers but running shoes with spikes to allow them to get better grip.

​So far there is no sign of an “arms war” in the sprint shoe department but Mr Gault said Nike announced some new shoes on Wednesday and there is a suggestion it will try to “translate some of this technology to the 800m and 400m.”

The row over hi-tech shoes echoes the controversy at the 2012 Olympics about whether Paralympian Oscar Pistorius, from South Africa, had an unfair advantage because of his Flex-Foot Cheetah prosthetic legs.

© AFP 2019 / HERMAN VERWEY
Paralympian Oscar Pistorius is seen during his sentencing for the killing of his girlfriend Reeva Steenkamp at the high court in Pretoria, on October 21, 2014

In the event Pistorius - who was later jailed for killing his girlfriend -  came eighth in the 400 metres semi final and failed to qualify for the final.

The Vaporfly controversy also has echoes of the row in world swimming a decade ago when the governing body banned Speedo's record-breaking LZR speed suit.