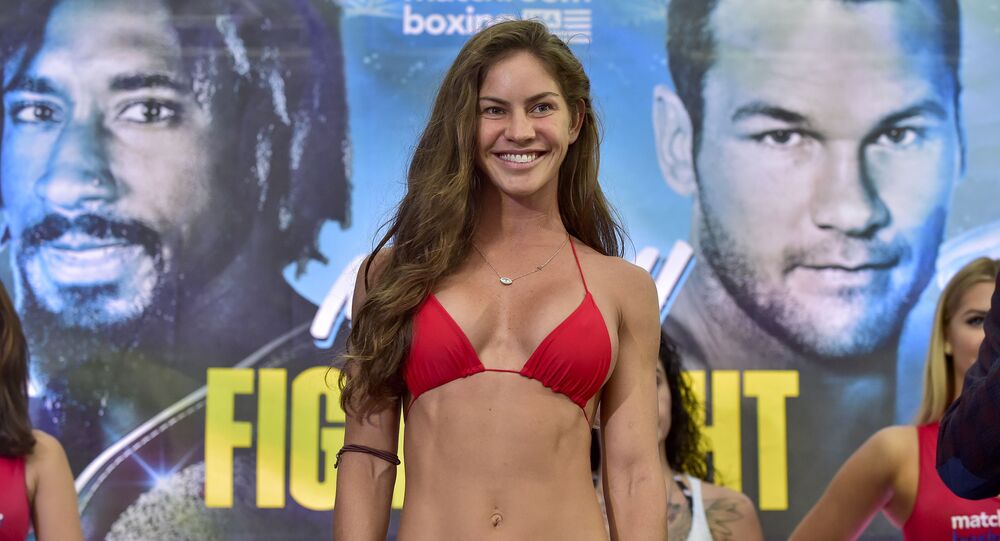 Australian stunner Avril Mathie snatched titles at beauty pageants before switching to the boxing career two years ago. As her undefeated record shows, she gets into the ring to win. Training hard to make her dream of becoming a boxing champion come true, she still finds time to treat her fans to bikini shoots.

Bikini model from Australia Avril Mathie, who has swapped catwalks and beauty contests for a boxing career, has managed to remain undefeated and on course for the title as she knocked-out her main rival in the fourth round of a scheduled six.

The 32-year-old, dubbed the world’s sexiest fighter by the media, defeated 43-year-old opponent Angelina Hoffschneider on the undercard fight of the clash between WBO middleweight champion Demetrius Andrade and Luke Keeler from Ireland at Island Gardens in Miami, Florida.

The clash between YouTube influencers Jake Paul and Ali Eson Gib also took place. Although it ended in the first round, reports suggest that it still overshadowed the main event. However, according to some commenters, all eyes that evening were on Mathie’s smashing her rival.

The referee stopped the fight, saving Hoffschneider from further beating after Mathie pummelled her opponent. The victory was Mathie’s fifth wins in six fights. The outstanding record is slightly overshadowed by a 2018 draw for the American Boxing Federation Continental Americas female bantamweight title.

Team work makes the dream work 🙌🏽 Got the win last night with a 4th round stoppage 😈🥊 and that is thankfully not my blood all over me or on the canvas 😬🤷🏽‍♀️ . . #boxinggirl #miamifightnight #winning #ateam #mtkglobal #boxing #matchroomboxing #dazn #boxingnews #trainhardfighteasy #championmindset #livingmydream #boxinghype #fightnight #girlboss

She began boxing as an amateur after she broke her foot during a kickboxing fight and eventually decided to dedicate herself full time to punching. She still has a long way to go before getting her dream world title as she is still only ranked 6th in the US and 66th in the world. However, she is ready to flash her bikini body along with behind-the-scene training photos on Instagram, where she has amassed almost 200K followers.