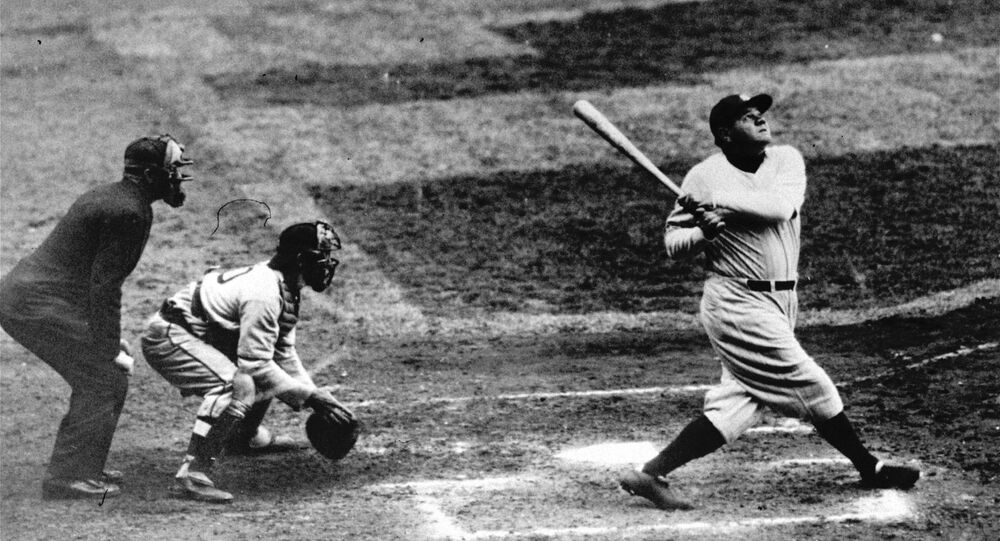 From Babe Ruth To Neymar: 100 Years Of Sporting Transfer Records

On 26 December 1919 Babe Ruth - one of the hottest properties in baseball - left the Boston Red Sox to join the New York Yankees for a record fee of US$125,000. Sputnik looks at some of the biggest sporting transfers in the last 100 years.

The signing of George Herman Ruth - who became world-famous as Babe Ruth - was so controversial that the Yankees did not announce it until 5 January 1920, more than a week after the ink had dried on the deal.

Ruth, an all-rounder who was as good pitching as he was batting, had led the Red Sox to three World Series victories and when he decamped to their rivals he was immediately accused of betrayal.

​But he was such a success with New York that when their new home - Yankee Stadium - in the Bronx was built in 1923, it was described as “the house that Ruth built.”

The Yankees won the World Series four times before Ruth retired while the Red Sox were hit by “the curse of the Bambino” and had to wait 86 years for another World Series victory.

So what are the other whopping sporting deals that have caused a shock?

On 9 February 1979 Nottingham Forest, managed by the eccentric and egotistical Brian Clough, shocked the footballing world when they broke the UK transfer record by spending £1 million on striker Trevor Francis from Birmingham City.

It smashed the previous record, set only the month before, when West Bromwich Albion paid Middlesbrough £516,000 for David Mills, who suffered a catalogue of injuries and scored only six goals in 59 appearances.

The world transfer record was smashed to smithereens in August 2017 when Neymar moved from Spanish giants Barcelona to Qatar-funded Paris St Germain for a fee of £198 million.

Journalists struggled to keep a straight face as the Brazilian international spoke about his motivation for moving from one of the world's great clubs to a team which has never won the Champions' League.

Eyes were raised even further when PSG club president, Nasser Ghanim Al-Khelaïfi, said Neymar "could have gotten even more money."

Neymar scored a phenomenal 32 goals in 33 games for PSG in his first season but missed large parts of his second season through injury.

Last week Neymar, 27, hinted at a possible move away, telling France Football magazine: “Today, I’m a Parisian. I give 100 percent. I will give my life on the pitch so PSG wins. I never wanted to hurt anyone, but in my opinion, if you are not happy somewhere, you have to leave.”

In February this year Bryce Harper, one of the best outfielders in baseball, left the Washington Nationals to join the Philadelphia Phillies.

The 26-year-old signed a 13-year contract worth a staggering US$330 million.

​Transfers in baseball died out many years ago so the Nationals did not get a dime when Harper left, as a free agent at the end of the 2018 season.

But the Nationals got the last laugh when they beat the Houston Astros in October 2019 to win the World Series for the first time, while the Phillies failed even to make the end-of-season play-offs.

Harper’s huge contract was only a briefly a record - in March the Los Angeles Angels gave their star player Mike Trout a 12-year contract worth US$430 million.

In July 2018 Portuguese star Cristiano Ronaldo moved from Real Madrid to Juventus for an eye-watering £100 million.

It looked an even better deal for Real when reports began to emerge only two months later that the player was being accused of sodomising a woman in Las Vegas in 2009.

Ronaldo firmly denied the claims - which were finally dropped in July 2019 - but they affected his form and certainly hampered sales of Juventus shirts with his name on.

It was not the first big money move he had made.

In 2009 he moved from Manchester United to Real Madrid for £80 million, giving the Old Trafford club a £68 million profit on a player who remains revered by United fans.

Louisiana-born quarterback Peyton Manning was the Indianapolis Colts’ star player in 2011 and had been the Most Valuable Player (MVP) when he helped them win the Super Bowl four years earlier.

In July 2011 Manning had signed a five-year contract worth US$190 million with the Colts.

​But in March 2012 he was suddenly released by the Colts - who faced having to pay him a $28 million bonus and were due to pick highly rated quarterback Andrew Luck in the NFL Draft.

Manning had four teams chasing him in the spring of 2012 but chose the Denver Broncos, after a chat with their legendary quarterback John Elway.

Manning would go on to win another Super Bowl with the Broncos, in 2015, and retired that same year, aged 39.

His replacement at Indianapolis, Luck, retired due to injury in 2019, aged just 30.

Newcastle-born Alan Shearer started off playing football hundreds of miles away with Southampton.

The teenage Shearer scored a hat-trick on his debut for the Saints and in 1992 he was one of the first players Kenny Dalglish signed for Blackburn Rovers when the wealthy Lancashire club began plotting their assault on the Premier League.

​Rovers won the Premier League in 1995 and he scored 112 goals in 138 games for the club before his hometown club came in for him the following year.

The UK transfer record at the time was £8.5 million at the time but Newcastle almost doubled it — paying a phenomenal £15 million to bring him to St James's Park.

He was greeted like a Geordie Messiah and scored 148 goals in 303 games for the Toon, but was unable to help the perennial under-achievers win any trophies.

Shearer is a TV pundit nowadays, after a very brief and unsuccessful spell managing Newcastle.

France is not renowned for having world-class basketball players but there is little doubt that on his best day Nicolas Batum is in the top echelon.

Slowly getting back on track! pic.twitter.com/EJPPuCe6PV

​The Hornets, who are owned by none other than NBA legend Michael Jordan, then splashed out on a $120 million five-year contract for Batum.

But he has struggled with injury and form in the last three years.

Zachary Padmore, from Hornets blog Swarmandsting, wrote recently: “You expect a lot more from the highest paid player on your team, and Batum just hasn’t given nearly enough evidence to prove he was worth that amount of money…A big problem that Batum had during the 2018-19 season was his lack of aggressiveness.”