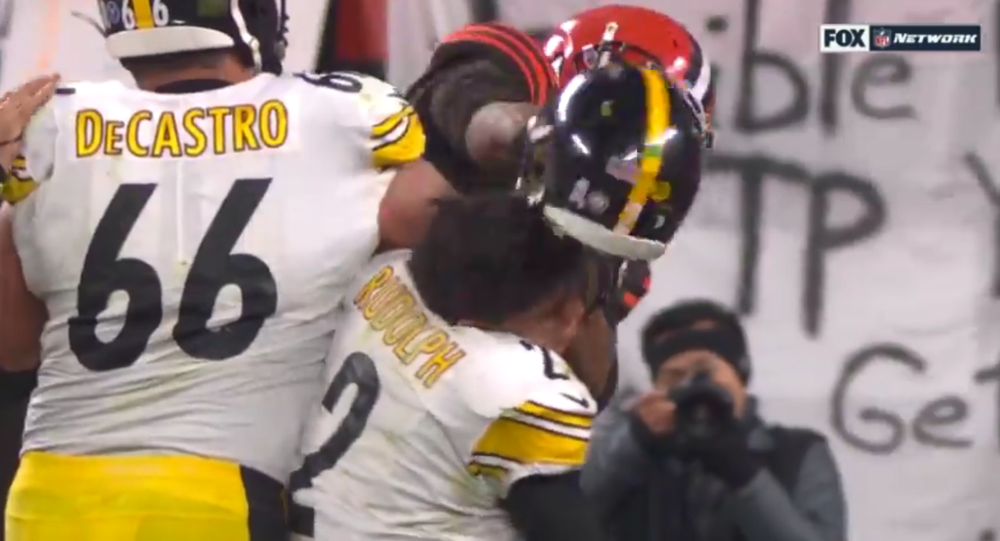 Myles Garrett, a defensive end for the Cleveland Browns pro football team, was given an indefinite suspension by the US National Football League (NFL) on Friday for attacking an opposing player with a helmet during a game the previous day.

While there’s no police investigation as of yet, Garrett won’t be playing in any professional football games or getting paid until at least the end of the season. The defensive lineman’s future beyond the postseason remains in question.

During the closing seconds of a Thursday evening match between the hosting Cleveland Browns and their rival across the Alleghenies, the Pittsburgh Steelers, Garrett took a swing at Steelers quarterback Mason Rudolph using Rudolph’s own helmet, which had come off seconds earlier in a tussle several yards away following a play in which the quarterback was tackled by Garrett.

The swing grazed Rudolph’s head, but sparked a wider brawl in the endzone, with players rushing off the sidelines to take a swing at the other team.

Maybe one of the ugliest moments in pro sports at #BrownsVsSteelers game as #Steelers QB #RUDOLPH got pummeled on his head by his own helmet by #browns #Garrett. #NFL #QB #BakerMayfield, in his post-game interview, says teammate #MylesGarrett's actions are "inexcusable". pic.twitter.com/fYP9KplA4c

​Rudolph’s agent, Timothy Younger, wrote on Twitter after the game, “There are many risks and NFL QB assumes with every snap taken on the field. Being hit on your uncovered head by a helmet being swung by a 275 lb DE [defensive end] is not one of them. Tonight could have had a catastrophic ending.”

Steelers President Art Rooney II expressed his team’s disappointment with the home team’s conduct, saying in a Friday statement, “The actions of the players involved were not something that should be part of any football game.”

“Our players, coaches and everyone in the Steelers organization understand that we must always maintain composure, no matter what happens. After a hard-fought game between two rivals, it is a shame that the game ended that way,” Rooney said.

Garrett apologized for his actions in a Friday statement following news of his suspension, saying he had “made a terrible mistake” from which he would learn.

“I lost my cool and what I did was selfish and unacceptable. I know that we are all responsible for our actions and I can only prove my true character through my actions moving forward. I want to apologize to Mason Rudolph, my teammates, our entire organization, our fans and to the NFL. I know I have to be accountable for what happened, learn from my mistake and I fully intend to do so.”

In addition to Garrett, Steelers center Maurkice Pouncey and Browns defensive lineman Larry Ogunjobi were also punished for joining the brawl. Pouncey leaped to Rudolph’s defense, punching Garett and kicking him in the head, which earned him a three-game suspension; Ogunjobi shoved Rudolph to the ground and was suspended for a game. Both teams were also fined $250,000 each by the league.

NFL Network also noted that the league was investigating Rudolph’s conduct immediately prior to the incident, with the possibility of fining him as well, if he provoked a conflict with Garrett, and players who rallied from the benches to the endzone exchange could potentially be fined as well.

As some observers have pointed out, in a struggle on the ground, Rudolph can be seen pulling at Garrett’s helmet, seemingly trying to remove it.

​League procedures dictate that a player can be fined $7,017 for participating in a fight and $3,507 for entering a fight area but not participating.

Garrett has three days to appeal the league’s decision. If he wants to play again next season, the lineman must apply for reinstatement and meet with the office of NFL Commissioner Roger Goodell first, Triblive noted.