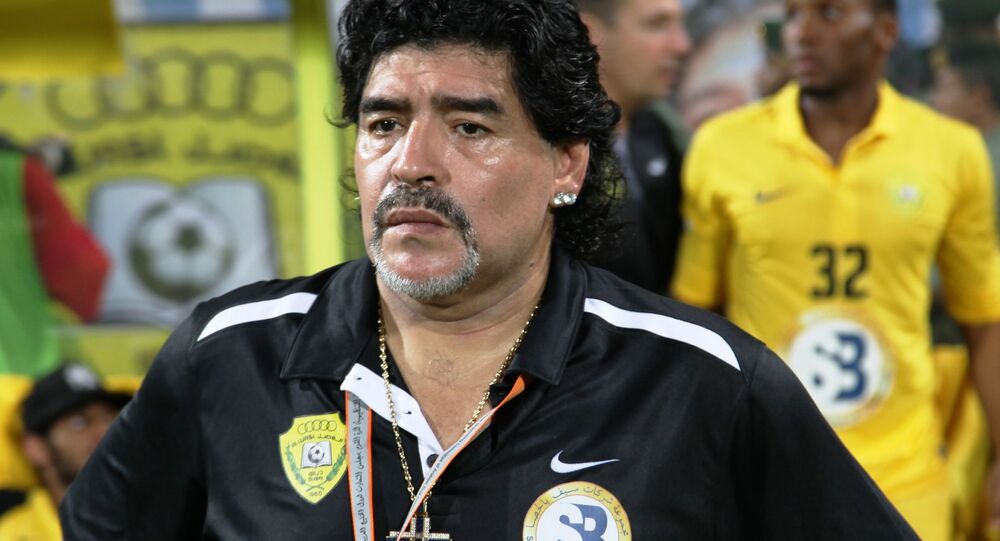 'Maradona of Thrones:’ Giggles as No. 10 Manages His Team to a Win From Royal Seat

Argentinian legend and today’s birthday boy - “Golden Boy” - Diego Maradona made sure he sat in a comfortable spot and was clearly visible from every corner of the stadium as he was watching his new team Gimnasia crush their Argentina Superliga rivals yesterday night.

Universally considered to be a football king, Diego Maradona apparently channelled his reputation and status to the furniture he picked to sit on as La Plata-based Gimnasia took on Newell’s Old Boys on Tuesday.

Seated on what looked like a real pitch-side throne, the award-winning footballer and coach looked on at his players as they managed a first-half strike and then proceeded to net three more goals in the second-half.

However, Maradona and his throne arguably stole the thunder, right after the coach, who briefly played for Newell’s Old Boys (1993-1994), made a speech to fans before the game, attracting applause.

“Because benches are for losers”, one football enthusiast posted about Maradona’s choice.

“Diego of Thrones”, another cheekily remarked reposting the viral picture, while a different netizen pointed out the throne had been self-assigned.

“Newell's Old Boys made a throne for Maradona to watch the game even though he's the opposition manager. Legend”, another posted. …whereas some noted that “only Diego” was sitting on a throne.

Last night he directed his Gimnasia team to a 4-0 win whilst sat on a throne beside the pitch.

Some agreed that the motion is typical of the “Golden Boy”:

Diego Maradona was given a throne to sit on for his return to Newell's Old Boys last night. 👑

He didn't even stand up when his team scored.

Those who were not at the game were able to watch the coach through a special camera named “Diego Cam” on TNT Sports.

Maradona, who won the World Cup in 1986 and is one of the two joint winners of the FIFA Player of the 20th Century award, took over as manager of Gimnasia, based near Buenos Aires, in September.

He appears to be enjoying his new position: a viral video that has recently made headlines showed him dancing after he led his new team to their first victory under his management. Today, 30 October, Maradona turns 59, and Twitter has fondly recalled the date:

...and here is how his fans greeted him when he arrived to his hotel .

There's only one Diego Armando Maradona.

Happy birthday to the living legend himself, Diego Armando Maradona. No words can describe the genius and the impact this magical player had on football, the Argentina national team, Napoli or his fans. pic.twitter.com/adgVnovhZv