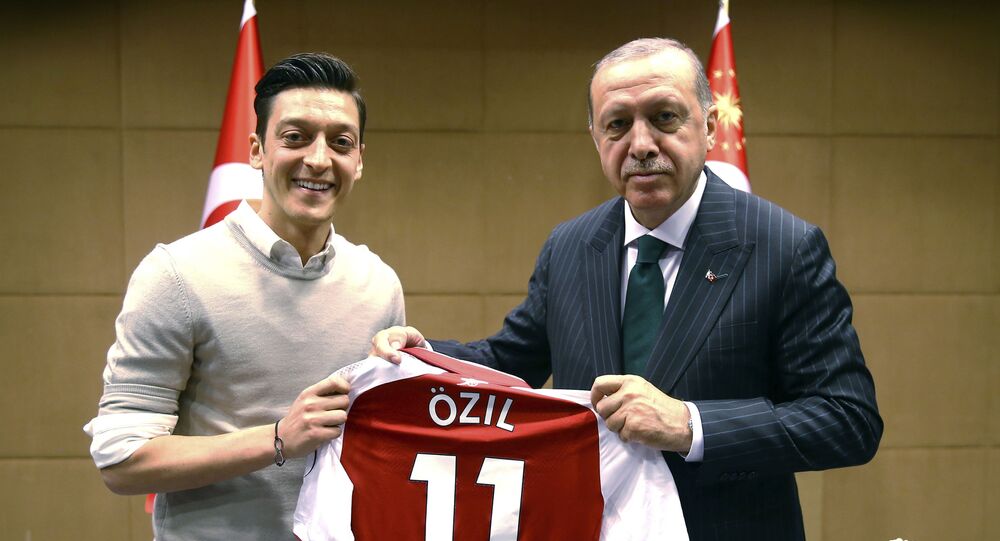 Some say that Arsenal footballer Mesut Ozil’s photo with the Turkish president negatively impacted his career and forced him to retire from Germany’s national team. Ozil says he has come in for a lot of racist abuse since the photo, but that has no regrets about it.

Germany's Mesut Ozil, who found himself on the end of some negative press after posing for a photo with Turkish President Recep Tayyip Erdogan, has defended his support for the president.

“[Erdogan] is the current president of Turkey and I would show respect to that person, whoever it was,” Ozil said in an interview with The Athletic.

The 31-year-old midfielder, who was born in Germany to Turkish parents, said: “If the German president or [Chancellor] Angela Merkel are in London and ask to see me, to speak to me, of course I would do that as well. It's just about showing respect to the highest position of a country.”

“With time to reflect, I know it was the right decision. It was a very difficult period for me as I played nine years for Germany and was one of their most successful players. I won the World Cup and more, played a lot of games - a lot of them really good - and gave everything.”

In May last year, Ozil got embroiled in a nationwide controversy when he and Manchester City footballer Ilkay Gundogan, also of Turkish origin, posed alongside Erdogan ahead of the 2018 World Cup in Russia. The two came under heavy criticism in Germany for meeting with Erdogan, who has been accused of violating human rights.

Several German politicians have called for Ozil and Gundogan to be dropped from the national team, while the German Football Federation claimed the photo-op was an “election campaign stunt” for Erdogan. Ozil in response stated that the picture was not intended as a political statement but as a sign of respect for his Turkish heritage.

“My generation changed German football. It became more fun to watch. But after the photo, I felt disrespected and unprotected,” Ozil recounted. “I was receiving racist abuse — even from politicians and public figures — yet nobody from the national team came out at that time and said, ‘Hey, stop. This is our player, you can't insult him like that’. Everyone just kept quiet and let it happen.”

The footballer received hate mails and threats online and was widely blamed for Germany’s abrupt departure from the World Cup at the group stage. Less than a month after returning from Russia, he retired from international competition. Gundogan decided to stay on the team.

After recalling his own mishaps, Ozil said there is a problem with racism in Germany and cited the recent shooting in Halle as an example.

“There are major problems in Germany — just look at what happened in Halle last week, another anti-Semitic attack. Unfortunately, racism is no longer only a right-wing issue in the country. It has shifted into the middle of society.”

He added: “When we were knocked out and I came off the pitch, German people were telling me, ‘Go back to your country’, ‘F*** yourself”, ‘Turkish pig’ and stuff like that.”

“Before the tournament there was a friendly in Leverkusen and when the ball came to Ilkay Gundogan, most of the stadium was booing him. I heard them shouting, ‘Goat f***er’, ‘f***ing Turkish boy’ and other insults that I can’t repeat.”

Ozil has continued to back Erdogan and even invited the president to his wedding in Istanbul as best man.