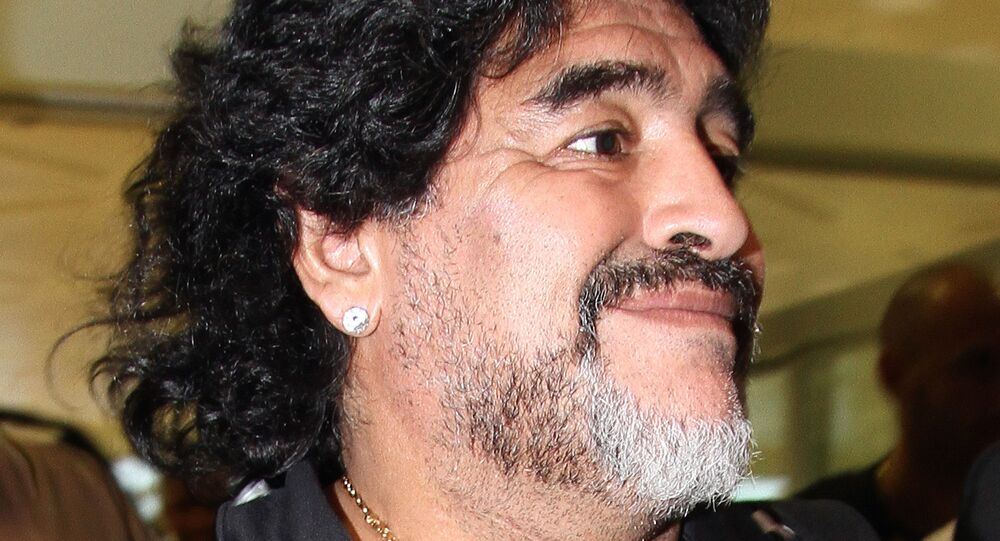 The 18-year-old said that he had long before seen his own photo in a magazine that reported he was allegedly Maradona’s son. Despite the subsequent stir in the family, which sought to “protect him from all this”, the boy raised the issue again several years later and even talked to his “dad”, finally learning “the truth”.

Santiago Lara, an 18 –year-old from outside Buenos Aires, has claimed that he is an illegitimate son of Argentinian football icon Diego Maradona, with the stunning “revelation” made on the Argentinian television talk show named “Intrusos En El Espectaculo” (“Intruders in the Show”).

Lara claims he first found out about his past in 2014 when he saw his own face in a magazine story:

"When I went to buy the newspaper for my grandmother as I always did the errands, I saw my own face in a magazine called 'Pronto' ('Soon') calling me his alleged son from La Plata (Buenos Aires Province)”, Lara noted as cited by the Sun.

He pointed out that his family, namely his grandmother, had deliberately kept him in the dark about his past after his mother died of cancer in 2003 at the age of only 23:

"My family always wanted to protect me from this, because for them it was a closed issue after my mother had died. I didn't want to know anything about that story until I was 16 years old”.

After his grandmother notified his father, Lara said, “my dad, along with a lawyer we had at the time, told me what happened and how my mum met him”.

Speaking about the reasons why the story was for a long time kept under wraps, Lara noted that his family didn’t want him to be involved in this, with his grandmother trying hard to “shelter” him and “protect his integrity”.

The teenager claimed that his mother met Maradona through Ferrito, his close friend at some point in the past, adding that she told Lara’s non-biological father “the truth” shortly before she died.

The authenticity of the boy’s claims hasn’t been confirmed yet, as there have been no reports of DNA testing or official comments on the matter from the legendary Argentinian No. 10 playmaker, who already has five children he calls his own. However, his lawyer dropped a bombshell claim earlier that he could have more in Cuba after “behaving badly”.

Maradona, who recently quit coaching the Mexican club Dorados, famously became one of the two joint winners of the FIFA Player of the 20th Century award and has been internationally acknowledged as an unrivalled football talent due to his passing, exceptional ball control, and dribbling skills, combined with his relatively small – 1.65m – stature.

The soccer icon, who was at some point given the nickname "El Pibe de Oro" ("The Golden Boy"), frequently hits media headlines not only in connection with his professional career (that of a coach over the past few years), but a number of antics. Just last month, he claimed his former wife, whom he was married to for 15 years, had stolen a trove of assets that he had amassed throughout his sporting career – loads of football-related memorabilia and gifts from political A-listers.