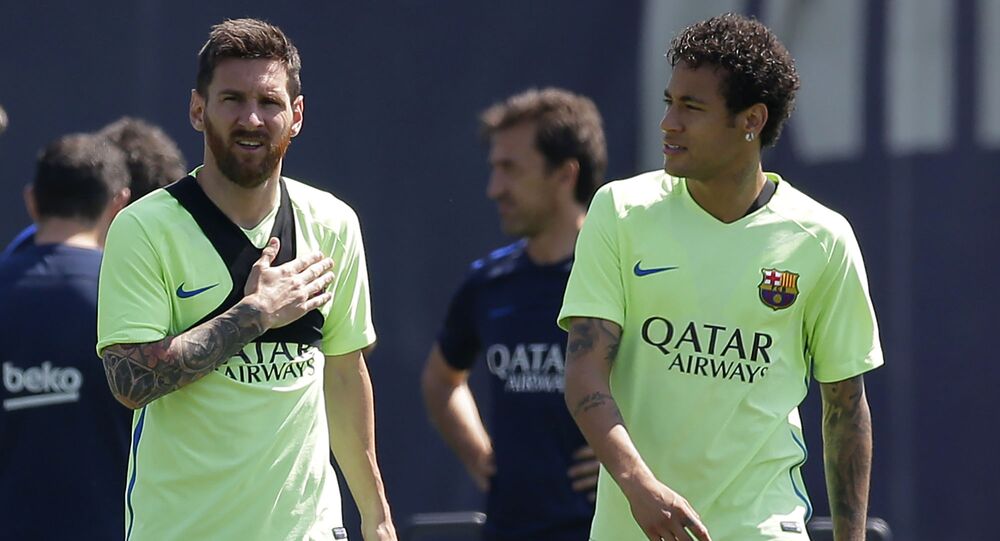 Barcelona is suspected of having serious concerns that their former star Neymar will end up with Real Madrid. Neymar, who played for the Catalan club between 2013 and 2017, has formed one of the deadliest football trios of this century together with Lionel Messi and Luis Suarez.

Lionel Messi has entered the field as arch-foes FC Barcelona and Real Madrid are rumoured to be battling it out for the services of Paris Saint-Germain star Neymar.

According to the Spanish newspaper Marca, Messi has personally asked Neymar not to join Real Madrid and instead called on him to return to Camp Nou.

Neither of the two has commented on the speculations.

Neymar, who has evolved from a young Brazilian prodigy into a world-class player during his four-year stint alongside Messi at Barcelona, left Catalonia in 2017 to join the Ligue 1 champions for a record-breaking fee of €222 million (nearly $250 million).

© AP Photo / Lynne Sladky
Barcelona's Lionel Messi, left, and Neymar, right, stand on the field during a break in the action during the first half of an International Champions Cup soccer match against Real Madrid, Saturday, July 29, 2017, in Miami Gardens, Fla.

PSG’s most valuable asset has since then won two national championships, a Coupe de France and a Coupe de la Ligue, but could not help his club in the Champions League play-offs for two consecutive seasons due to severe injuries.

Barcelona was widely speculated to seek the return of the 27-year-old Brazilian star and even sent a delegation to Paris on Tuesday to try and negotiate a deal, according to Catalan radio RAC1.

French media earlier reported that Barcelona had offered PSG between 60 and 80 million euros plus Philippe Coutinho (last summer’s €160 million signing) for Neymar, but Real Madrid is understood to be the Parisian club’s favoured partner.