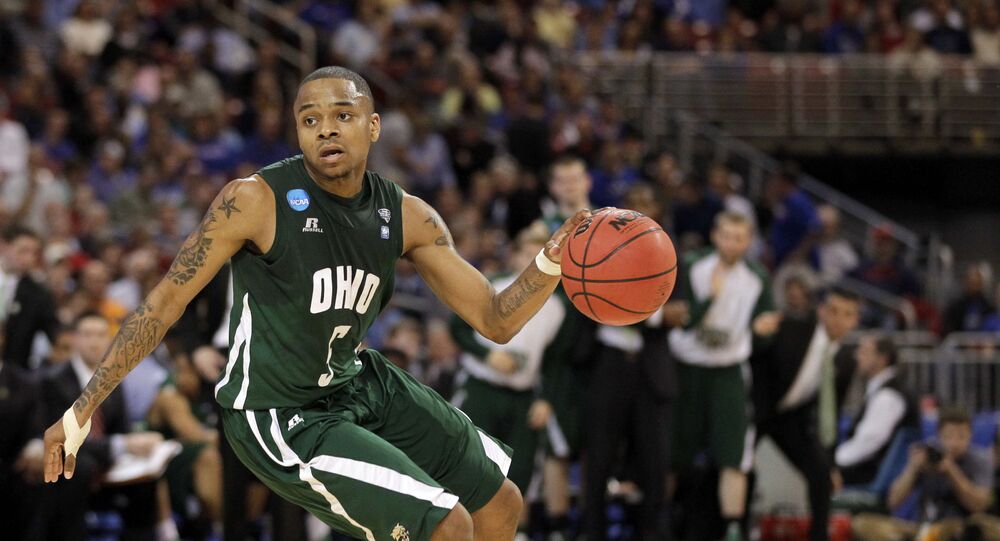 American basketball star Donell "DJ" Cooper left AS Monaco last year for "family reasons" and made an attempt to join the Bosnian national team later that year. Instead, he was reportedly banned for failing a drug test.

DJ Cooper was handed a two-year suspension from the International Basketball Federation (FIBA) after a failed drug test revealed something that he might not have been expecting, Eurohoops.net reported.

It wasn't performance enhancing drugs, rather a condition that's quite uncommon for a male player: the results reportedly showed that Cooper was pregnant.

The former Ohio star, who played for AS Monaco in France, left the team last year and sought to join the Bosnian national team as a naturalised player, therefore he had to take a regular drug test.

© AP Photo / Tony Dejak
Ohio's D.J. Cooper shoots during the first half of an NCAA college championship basketball game against Akron in the Mid-American Conference tournament Saturday, March 16, 2013, in Cleveland.

The urine sample that Cooper provided reportedly revealed the presence of human chorionic gonadotropin, or hCG, which is a hormone produced by the placenta during pregnancy. The report suggests that the urine belonged to his girlfriend, who apparently was not aware she was expecting at the time.

As a result, FIBA decided to suspend the player for two years for fraud, but he'll be eligible to return to the basketball court on 20 June 2020.