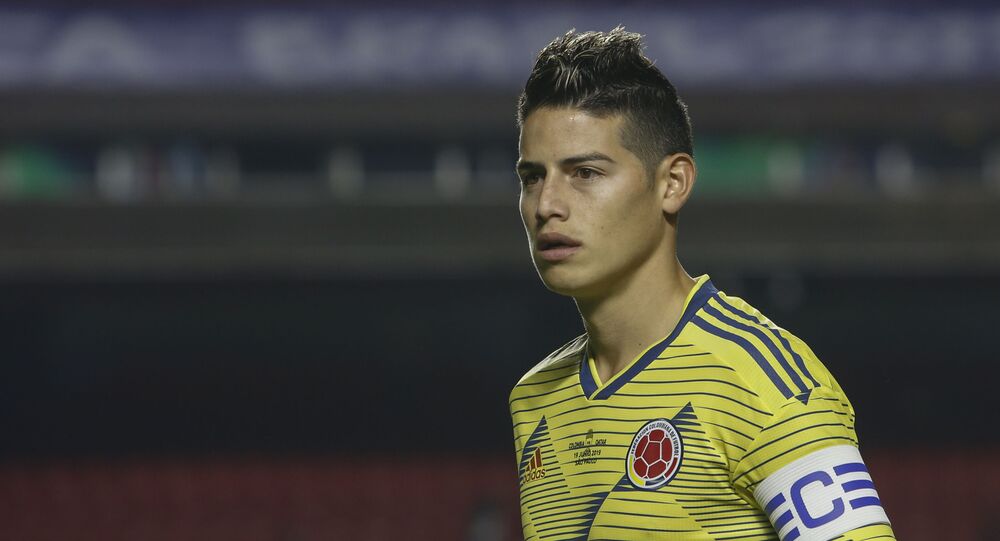 The Naples-based club has been eyeing James Rodriguez’s transfer from Real Madrid, which has recently welcomed him back after he was temporarily loaned out to Bayern Munich.

Diego Maradona Junior, the son of the legendary Argentinian No. 10 playmaker, has expressed delight at Colombian midfielder James Rodriguez’s potential move from Real Madrid to Napoli FC in the coming months.

"I always comment telling [James] to go to Napoli on his photos [sic]", Maradona Jr told MARCA, referencing their online exchanges with the Real Madrid player.

“I put pressure on him and recently he liked one of my comments. It's a dream that James is coming to Napoli. A footballer of this quality, with his left foot, can make the team better”, he praised Rodriguez’s proposed move, emotionally adding that the city is sure to welcome him “with open arms” and that the Colombian will “perform at his best” at the new location.

Maradona’s son also revealed that the negotiations over Rodriguez’s foreseeable future is proceeding between Real Madrid and the iconic Italian club, with the latter showing interest in inviting the player on a loan deal first, before deciding on his permanent transfer.

“From what I know, everything is very advanced. All that’s left to sort out is the formula of the operation. Everything else is done”, he said.

Napoli FC is closely tied to the Maradona family, as Argentinian legend Maradona Senior had a lengthy streak of professional luck there during the 1980s and 1990s. With this in mind, Diego Jr chose to sternly warn Rodriguez against taking his father’s No. 10 shirt, stating that “it’s private property of the family”.

"There were rumours that they'd give it to [Gonzalo] Higuain when he arrived, then to [Lorenzo] Insigne, but it has to be like in the NBA”, Maradona Jr remarked, adding that the policy should be as simple as this:

Serie A’s Napoli are currently hopeful to finalise a deal to sign James Rodriquez, after the 27-year-old Colombian was not employed permanently by Bayern Munich following a two-year loan deal from Real Madrid. One of the contentious matters ahead of the proposed transfer is the number James will potentially wear.

The midfielder wears a No. 10 shirt at the Spanish club, as well as for his national Colombian squad, but at Napoli, the number was retired in 2000 in tribute to Diego Maradona, who was called throughout his distinguished career "El Pibe de Oro" ("The Golden Boy").

Maradona, who recently quit coaching the Mexican club Dorados, famously became one of the two joint winners of the FIFA Player of the 20th Century award and has been universally acknowledged as an unrivalled football talent due to his passing, ball control, and dribbling skills, combined with his relatively small – 1.65m – stature.