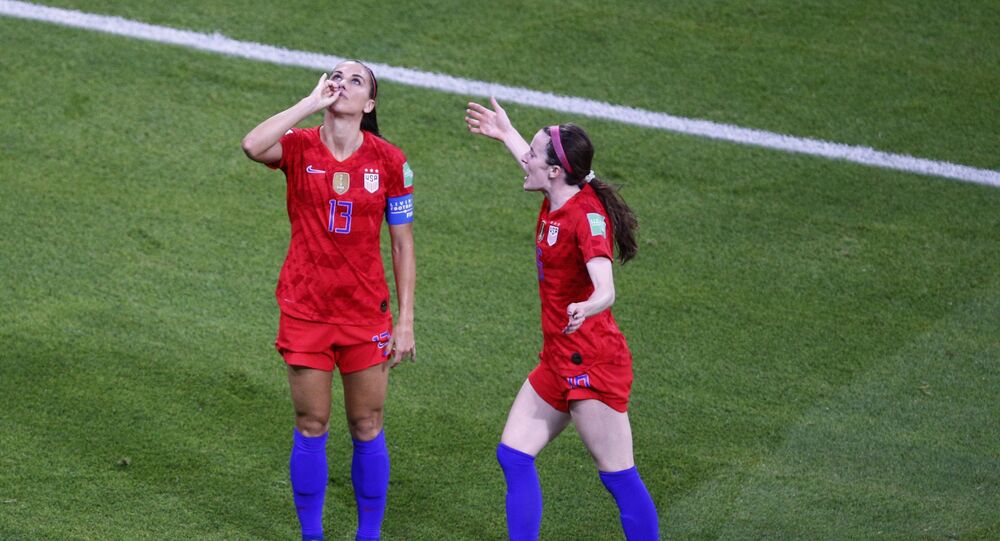 Striker Alex Morgan decided to reflect on her goal in the semi-final against England, which the US eventually won, with a tea-drinking gesture, where she mimicked taking a sip from a cup. While some have tried to decipher what the player meant, others took umbrage at her little show.

The US 2-1 victory over England in the 2019 Women’s World Cup semi-final has been marked with a social media stir over American forward Alex Morgan’s gesture. The footballer, who scored the second goal during the key match, put her fingers together as if she was holding a cup, raised her hand to her lips and mimed a sip.

The little show did not go unnoticed, as many immediately rushed to discuss what the striker meant.

Most netizens perceived the move univocally, although there were tongue-in-cheek theories about her making a tribute to the Boston Tea Party or her celebrating that she turned 30 on the day of the game.

Scoring goals and sipping tea on her 30th birthday.

​However, Morgan later confirmed on Twitter, when she thanked everybody for birthday wishes, that she was pretending to drink tea, which many believe is a quintessentially English practice due to the country’s imperial history.

​Many took a light-hearted approach and immediately spotted the likeness to another famous tea lover – Kermit the Frog – or rushed to congratulate the US squad.

Alex Morgan is the 🐐 for drinking tea after the goal vs England. pic.twitter.com/2aYy2j2MjL

Congrats to the #USWNT for earning that tea. On to the final! 🇺🇸 pic.twitter.com/nI8HoMjN1D

​However, many suggested that the champion was unabashedly trolling the English love for tea, with many hinting that this goal was way too easy for her. Some were triggered, including famous English female footballer Lianne Sanderson, who branded it disrespectful and distasteful.

Alex Morgan sipping tea after scoring on England is the most bad bitch move of 2019. Don’t tell me otherwise #ENGUSA pic.twitter.com/erbobeaMt8

Alex Morgan mocked the English by sipping tea whilst celebrating. In return when we score we should celebrate by mimicking a school shooting

​Piers Morgan, who rarely stays away from a good Twitter storm, also weighed in and admitted the reaction to the move “is seriously testing my love of America”.

This is seriously testing my love of America. pic.twitter.com/1oZbaP1qvH

​The US team, which is to face either Sweden or the Netherlands in the final, has already come under fire for what some considered an over-celebration after thumping Thailand 13-0.