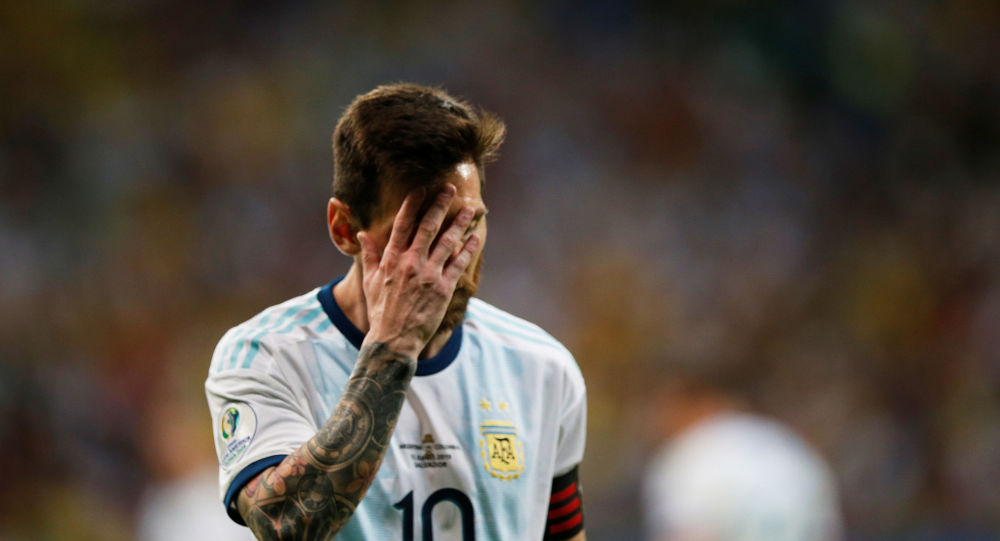 Barcelona’s star has been awarded the title of the world’s best footballer 5 times but has not been able to snag any international trophy with his team. The superstar already retired from the Argentinian squad once but came back for the 2018 FIFA World Cup in Russia.

A decision on retirement is looming in front of Lionel Messi after the Argentinian national suffered a defeat in the Copa America just one step away from the final, The Daily Star reports. Messi’s squad lost 0-2 to Brazil in the semi-final stage after Manchester City’s Gabriel Jesus and Roberto Firmino, who plays for Liverpool, scored and killed the Argentinians’ chances of winning an international trophy for the first time since 1993.

The loss reportedly raised doubts if the Barcelona star, who has been awarded the Ballon d’Or as the world’s best player five times and gained every possible title with the Catalan club, would continue playing for the Argentinian team.

Lamenting about the possibility that Messi could announce his retirement from the national team, the British outlet points out that he already gave up his international duty in 2016 after Argentina lost in the Copa America finals.

Messi, however, came back to lead Argentina through the 2018 FIFA World Cup qualifications and the play-off stage of the tournament. But Argentina’s hunt for the much desired international title was stopped by France, who eventually won the FIFA World Cup, in the Round of 16. Afterwards, the Argentinian star refused to take part in friendlies for the national team until the end of 2018. According to The Daily Star, this prompted rumours that Messi was going to retire from the national team but the star forward quashed them by returning for the Copa America.

Argentina’s failure in Brazil has brought these speculations to the fore again, although the outlet admits that Messi could stay for the next Copa America, hosted by Argentina and Colombia in 2020.

Netizens, of course, joined the chorus, suggesting the Copa America loss should push the Argentinian forward towards retirement or at least reconsider his decision about coming back.

Messi being sent back to another retirement 😭😭😭 pic.twitter.com/QYX2g0Q7iW

No doubt Messi is great but as long as Argentina builds team around him they will end up with nothing because opponents will full focus on targeting him. They need to team up. History will look upon international trophy count. Retirement 2.0 loading maybe? #CopaAmerica2019

Messi calculating the amount of words he has to write down in his retirement letter in the morning#CopaAmerica pic.twitter.com/4Cnj0F6oM9