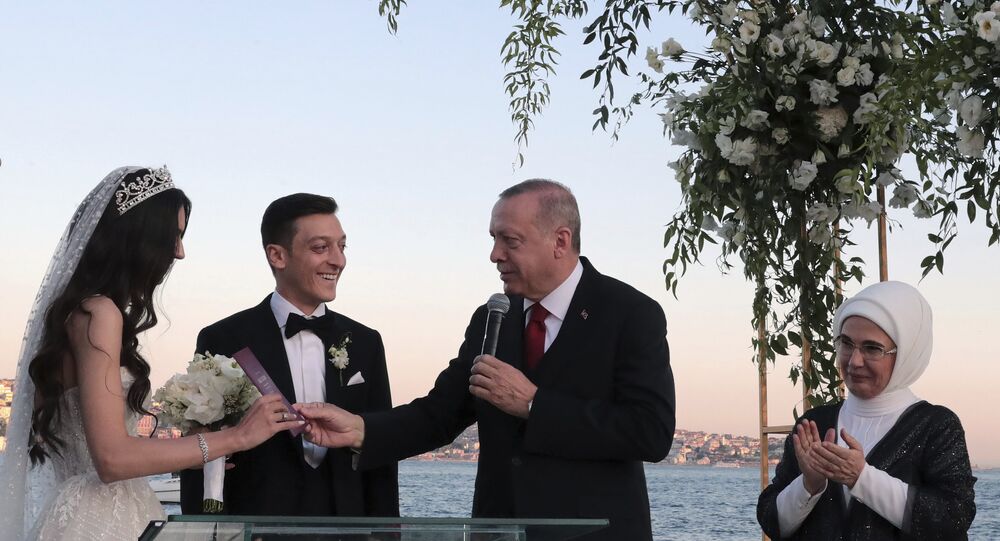 The German star footballer of Turkish origin, who fell out of fans’ favour after his bleak performance in the Europa League final, has prompted a new controversy. Mesut Ozil, who quit the national team following a backlash over a photo-op with the Turkish president, widely criticised in Germany for his domestic policies, invited him to his wedding.

Arsenal footballer Mesut Ozil has married his long-time girlfriend, former Miss Turkey Amine Gulse, at a luxury hotel in Istanbul. Turkish President Recep Tayyip Erdogan and his wife Emine were the posh ceremony’s honorary guests. Photos and videos of the Turkish first couple, standing smiling next to the footballer and his bride during the ceremony against the backdrop of the Bosphorus, spread online prompting a backlash on social media.

​Commenters have slammed the footballer for siding with Erdogan, criticised for his domestic policies in the West.

I still think the artist and the art is two different things but man will I have a hard time looking at Mesut Özil the same way ever again. This is not a matter of culture, that's just a bad excuse. https://t.co/OLJAt8lJQE

Ozil is so weak, Erdogan has attached himself to Ozil to make himself look better and Ozil doesn't have the backbone to tell him to fuck off https://t.co/oOkBP7OCBF

What the hell. One of the strangest news stories I’ve seen in a long time. https://t.co/m8LxPwqe78

​Others took a lighter stance.

Erdogan at Ozil's wedding is easily one of the top 5 comedic moments of the year and if you don't agree then I'm sorry but you simply don't understand comedy.

​Some defended the player for staying true to his principles.

​His public support for the Turkish president has already impacted the course of Ozil’s career. The footballer, born in Germany to a Turkish family, quit the national team, saying he has “this feeling of racism and disrespect”, following the backlash for his relations with Erdogan and Germany’s poor results in the 2018 World Cup.

Ozil and Ilkay Gündogan, another German player of Turkish descent, faced public anger in May 2018, after meeting with Erdogan and presenting him a jersey. Many, including the German Football Federation (DFB) and its president Richard Grindel, claimed they had assisted in his “election campaign stunt” after the photos of the meeting emerged online. In response, Ozil stated then that the picture was not meant to deliver any political message, but solely demonstrate respect for his heritage.

READ MORE: Mesut Ozil Compared to a Bag of Cement as Arsenal Thrashed by Chelsea in Baku

Despite the public uproar, he still invited the Turkish president to his wedding earlier this year, prompting disappointment from many politicians and football fans in Germany, who have criticised Erdogan over his policy towards the opposition and journalists.

According to France 24, Erdogan’s appearance at Ozil’s wedding is by no means a one-off experience as the Turkish president often graces the ceremonies of local celebrities. Notably, Ozil’s came ahead of a mayoral election in Istanbul.