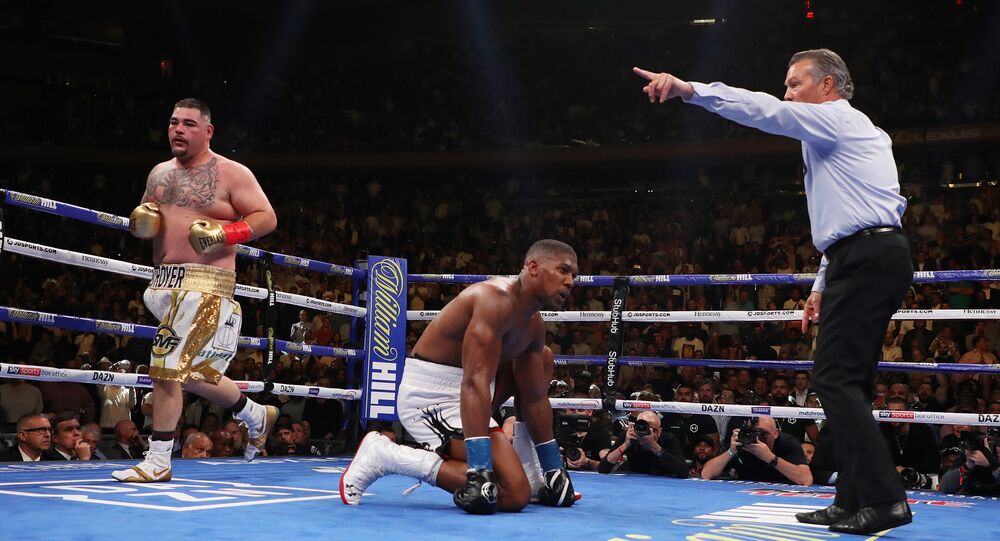 Where Does Anthony Joshua Shock Sit on Richter Scale of Sporting Earthquakes?

Anthony Joshua was the 25-1 on favourite when he defended his IBF, WBA and WBO against chubby Mexican-American fighter Andy Ruiz at Madison Square Garden in New York at the weekend. Sputnik looks at why it was such a huge upset and where it ranks among sport's biggest shocks.

Andy Ruiz was supposed to be the fall guy when he signed up, with only six weeks' notice to fight Anthony Joshua, who was unbeaten in 22 bouts and had stopped 21 of his opponents.

But the 29-year-old Californian had not read the script and served up a huge shock as he came back from being knocked down in the third round to stop the exhausted British fighter in the seventh round.

​Joshua, who was making his debut in the US, was expected to win the bout easily and then move on to a lucrative unification fight with World Boxing Council champion Deontay Wilder or a mouthwatering clash with fellow Briton Tyson Fury.

But Ruiz — who was only drafted in when Jarrell "Big Baby" Miller failed three drugs tests — seized his opportunity and shook up the world.

Ruiz, 29, said: "Everyone's been doubting me since the beginning. Especially for this fight — nobody knew I was going to win. I'm here now, the first Mexican heavyweight champion of the world."

​So what are the biggest shocks in sport?

Liverpool, who won the Champions' League final on Saturday 1 June, were utterly dominant in English football during the late 1970s and the 1980s.

Wimbledon, on the other hand, had been playing non-league football only a decade before.

The Crazy Gang, as Wimbledon were known, had made a meteoric rise to the top tier of English football.

​In 1988 they embarked on a run in the FA Cup, knocking out Newcastle and Watford before beating Luton in the semi final to set up a final at Wembley against Liverpool, whose route to the final had been considerably tougher but had included a 4-0 victory over Manchester City and a semi-final win against Brian Clough's Nottingham Forest, who Liverpool would meet again a year later at the tragic Hillsborough semi final.

Liverpool, packed with internationals like John Barnes, Alan Hansen and Ray Houghton, were the red hot favourites and were expected to brush Wimbledon aside.

But the Dons, led by midfield hard man Vinnie Jones — who would later have a Hollywood film career playing a muscular villain, were no easy touch.

Lawrie Sanchez headed Wimbledon in front before half time and goalkeeper Dave Beasant saved a Liverpool penalty in the second half as the Londoners held on to win 1-0.

Mike Tyson was a terrifying phenomena in the late 1980s, when he became the youngest ever heavyweight champion and then destroyed big names like Michael Spinks and Larry Holmes with his explosive fistic power.

Prior to 1990 Tyson had won all 36 fights and in his last fight he had destroyed Carl "The Truth" Williams with a devastating first round knockout.

Boxing promoter Don King was running out of opponents who were willing to share the ring with "Iron Mike".

One of those who thought he would give it a shot was James "Buster" Douglas, who had lost four previous fights, including three by knockout.

The fight was to take place in Tokyo and Douglas was given about as much of surviving to the final bell as a World War Two kamikaze pilot.

But Tyson had just gone through an expensive and acrimonious divorce from wife Robin Givens — who he had only married in 1988 — which wrecked his preparation for the fight and distracted him mentally.

​Tyson knocked Douglas down in the eighth round and the timekeeper was slow in taking up the count, which arguably saved Buster from being counted out.

But Tyson was running out of steam and in the 10th he was knocked down for the first time in his career.

​Tyson was counted out — and would go to jail two years later for rape — but Douglas would be champion for only a few months, losing his first defence against Evander "The Real Deal" Holyfield.

Pakistan are one of the great cricket nations of the world and the sport is almost a religion to Pakistanis, who elected a former cricketer, Imran Khan, to the post of prime minister last year.

But at the 2007 Cricket World Cup in the West Indies, the Pakistan team was not in good shape and suffered one of the most shocking defeats in the history of the sport.

During the group stage Pakistan were up against Ireland, a country with a small population and little tradition of playing cricket.

The game was played on St Patrick's Day — 17 March — and the Irish were in inspired form in the game in Kingston, Jamaica, and bowled Pakistan out for 132.

​The Irish, led by their wicket-keeper batsman Niall O'Brien, reached their required target as the Caribbean darkness closed in.

Pakistan were knocked out of the World Cup and when the team's English coach Bob Woolmer, 58, was found dead in the bath the following day there were wild rumours that he had been murdered after uncovering a match-fixing scandal.

An inquest would later rule he died of a heart attack and no evidence was ever produced to suggest the game had been fixed.

Rugby union is almost a religion to white South Africans, especially to those from the Afrikaans-speaking community.

In 1995, watched and cheered on by their new President Nelson Mandela, South Africa had beaten New Zealand to win the Rugby World Cup.

The hero that day, Joel Stransky, retired the following year, as did captain Francois Pienaar, and the team were not as strong going into the 2015 World Cup in England.

​But when they played Japan at the Amex Stadium in Brighton they were expected to beat the "Brave Blossoms" easily.

The Japanese team, which contained a smattering of "ringers" who were foreign born, outperformed expectations and were trailing by only three points as the game went into overtime.

Japan pressed and pressed and with seconds remaining Karne Hesketh, a New Zealand-born wing who played for Fukuoka Sanix Blues, burst over the line and scored a try.

The ref blew the whistle seconds later. Japan had won 34-32 and South Africans were shocked and devastated.