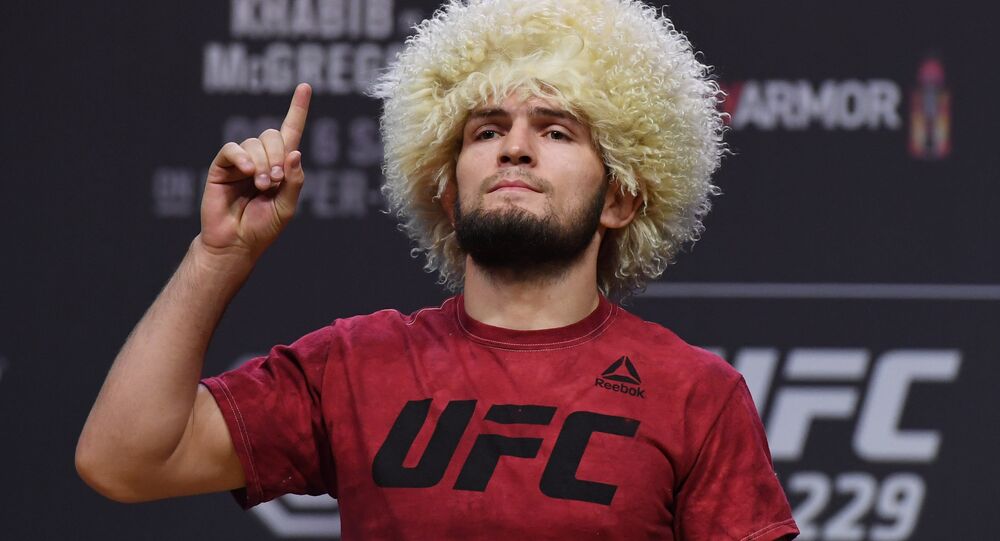 Ferguson’s Twitter rant comes a few days after Nurmagomedov’s manager, Ali Abdelaziz, described the American MMA fighter as nothing but a “clown”. Ferguson will face Donald Cerrone at UFC 238 in Chicago next month, while Nurmagomedov is serving his nine-month suspension.

“You’d better leave my name out of your mouth before I mop the mat with your sorry a*s”, Ferguson tweeted, warning Ali Abdelaziz against “clowning” and accusing him of having “no pride” and “no guts”.

Ain’t No Clowning Around You Fake Fuck. @AliAbdelaziz00 You Better Leave My Name Out Of Your Mouth Before I Mop The Mat With Your Sorry Ass. You Ain’t Shit W/ Out Your Homeboys Ya Snitch. No Pride, No Guts, Just Like Your Paper Chump @TeamKhabib See You In Person Soon. pic.twitter.com/LzWGpO3tm0

The rant comes after Ferguson announced his upcoming fight against Donald Cerrone in the UFC 238 tournament, in a move that was followed by Ali Abdelaziz calling Ferguson a “clown” on Twitter.

The real champion fighting the number one contender & a clown fighting a cowboy & a quitter fighting someone who will take his soul away @Justin_Gaethje @TonyFergusonXT @DustinPoirier @TeamKhabib pic.twitter.com/bwFwkM9nnR

Twitter users have, meanwhile, remained at odds over Ferguson's remarks, with some touting him as the best fighter and others giving kudos to Khabib.

How is khabib a paper champ man? C'mon! Smh

Let's hope it's not like the McGregor show and everyone shows up to win. Its getting old with those guys showing up just not to lose. I know you'll put it on the line!!! #painisprofit

I enjoy your comments and flow but to call Khabib a paper champ isn't fair. He's proven to be a top contender. However… Please get the hype! pic.twitter.com/o6psuLlVpV

Your the best fighter of the world!

I'm praying for that fight to happen.

Khabib will beat the brakes off Tony. You don't have to like him. You just have to accept it

Khabib isn't a paper champ, with due all respect 🙏

While Nurmagomedov is currently serving his nine-month suspension, Ferguson was offered in April to fight MMA featherweight champion Max Holloway for the interim belt, but he declined.

Khabib responded by writing on his Instagram account, “Tony, you had your chance, and you missed it, and that’s your fault only”.

“You know that I’m disqualified and can’t fight, but it’s not fair to strip me of the title. […] As a fighter you deserve a title fight, you are (a) great fighter and opponent, but now you have to fight or wait for my DQ to be over and fight”, Nurmagomedov added.

Khabib, in turn, took on US mixed martial artist Al laquinta to claim the title, which he defended with a submission win over Conor McGregor at UFC 229 in October 2018; the fight rounded off with a post-bout brawl leading to Khabib’s current suspension.

Khabib Nurmagomedov Hits Back at McGregor, Calling Him ‘Rapist’