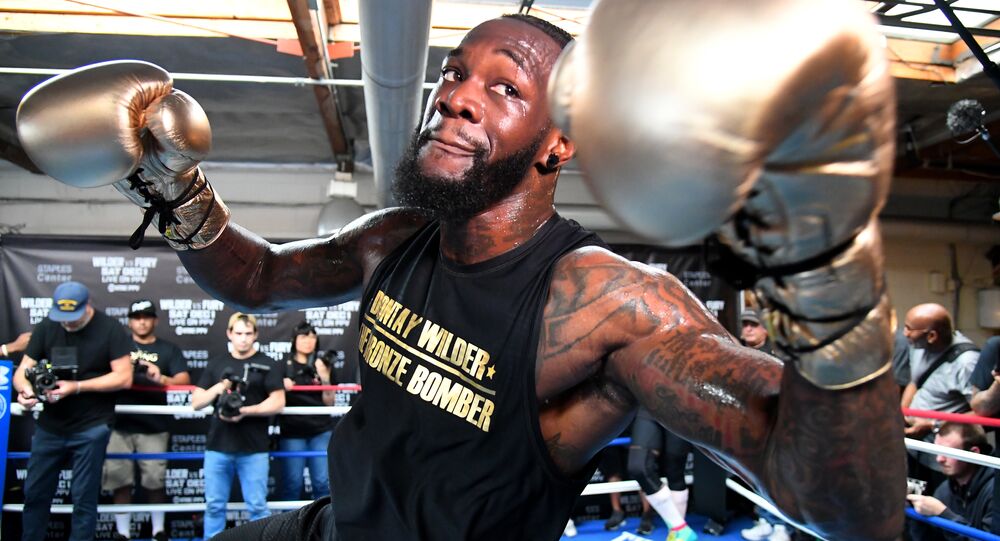 'You Can Kill and Get Paid': Boxer Wilder Explains Why He Wants 'Body on Record'

Wilder, who has never lost a fight, winning almost all of them with a knockout, is set to meet his next opponent, Dominic Breazeale, in the ring on 18 May to defend his heavyweight champion title in the World Boxing Council (WBC).

Deontay "The Bronze Bomber" Wilder has elaborated in an interview with journalists on an earlier controversial statement he made, where he said that wants to kill an opponent in the ring before he leaves the professional sport for good.

"This is a brutal sport […] This is the only sport where you can kill a man and get paid for it at the same time. It's legal! So why not use my right to do so?" he asked.

Deontay Wilder on wanting to kill an opponent: “This is the only sport where you can kill a man and get paid for it at the same time…so why not use my right to do so?” #WilderBreazeale pic.twitter.com/Li5bcSdHEn

His statement comes ahead of his title fight against Dominic Breazeale, where he will defend his heavyweight champion belt. Wilder stressed that Breazeale's life is literally "on the line for this fight" and reiterated his earlier statements by saying that he is still looking to "get a body on record".

Wilder made the controversial remark that he wants to kill a man in the boxing ring before retiring from the sport in an interview on "The Breakfast Club" radio show in March 2018.

The boxer explained that once he is in the ring, his "Bronze Bomber" persona takes over, saying that he desires to get a body on his record; although he admitted that his primary persona, Deontay, "would feel bad". At the same time, Wilder added that he "signed up for that".

Deontay Wilder is US-born boxer who currently holds the WBC heavyweight champion title. He has won 40 fights, 39 of which have been by knockout. He's won half of them in the first round. Wilder has never lost a fight, but has had one draw in a much-anticipated fight against the "Gypsy King" Tyson Fury.