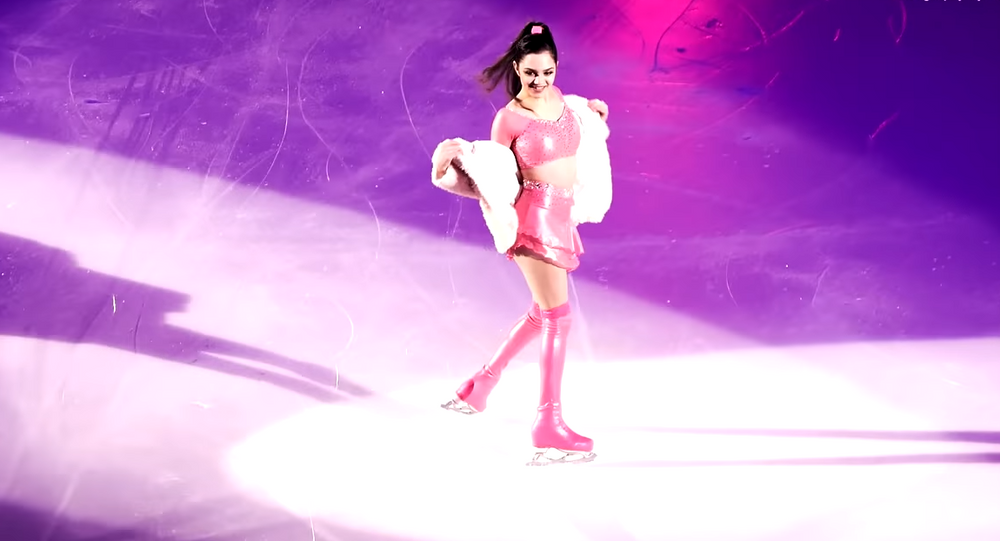 Russian figure skating star Evgenia Medvedeva has been targeted by trolls on social media after she posted a photo from her latest performance in Seoul, where she rocked the skating rink in a pink latex outfit.

After she captioned the image "A competition for the harshest comment", users inundated her Instagram account with disparaging remarks, claiming that she looked "cheap" in pink boots, latex knee-high stockings, a crop top and a matching mini-skirt.

One netizen sent out a mean message, asking, "How much do you charge for an hour?" — apparently comparing her to a sex worker. Medvedeva seemed to be prepared for the backlash and quickly replied: "Two vegan burgers".

© Sputnik / Vladimir Pesnya
WATCH Russian Ice Champ Medvedeva Rocking Arena in Daring Pink Outfit
Another sharp-tongued user made reference to the reports that Olympic champion Alina Zagitova had unfollowed Medvedeva on Instagram: "When you found out that Zagitova unfollowed you and you can finally throw an 18+ party", while fellow netizens penned, "Breaking Bad" and "This is what happens when you lose in strip poker".

Many others didn't hesitate to compare her with another Russian skater, Elizaveta Tuktamysheva, who hit world headlines with a daring "striptease" performance: "Tuktamysheva give back Evgeniya her Instagram account, it is not funny anymore".

Medvedeva won a silver medal in women's single skating events at the 2018 Olympic Winter Games in Pyeongchang, South Korea. In 2017, she also won the European Championships in Ostrava, Czech Republic, setting world records in the short and free skate programmes, and breaking South Korea's Yuna Kim's world record total score from the 2010 Olympics with a total score of 229.71.