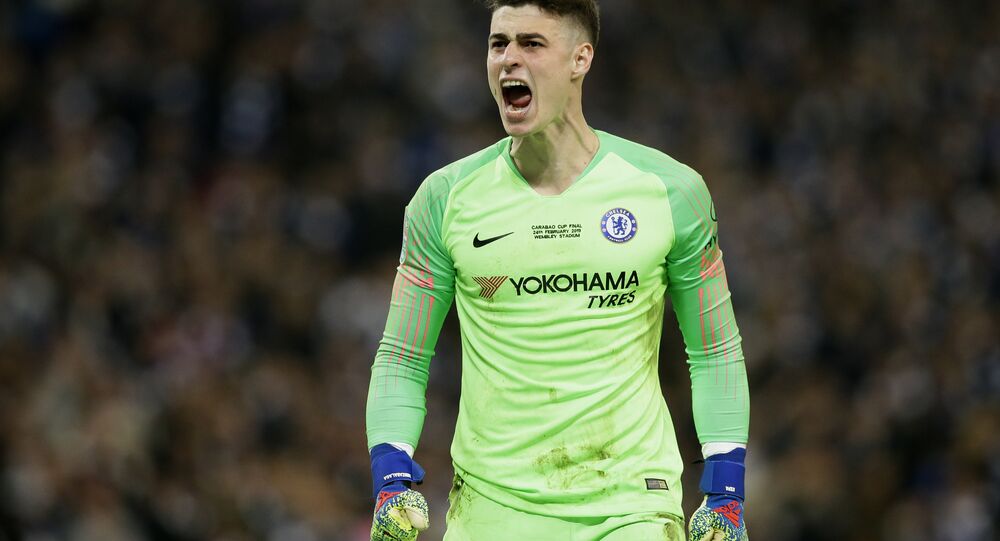 Record Breaking Chelsea Goalkeeper Apologises After Being Roasted on Twitter

Chelsea goalkeeper Kepa Arrizabalaga refused to be substituted by under-pressure manager Maurizio Sarri in the dying moments of extra time in the Carabao Cup Final at Wembley against Manchester City.

The Basque-born keeper, who signed for a record-breaking £71 million in the summer, was roasted on social media for his act of "disrespect" to Sarri, who was trying to replace him after he went down with cramp.

Sarri was absolutely furious when Kepa refused to leave the field and be replaced by Willy Caballero as penalties loomed against City in the Carabao Cup Final, which was the London club's only realistic chance of a trophy this season.

Kepa later made a grovelling apology on Twitter, which has been liked 38,000 times.

Kepa went on to save Leroy Sane's penalty in the shootout, but could have done better with Sergio Aguero's effort that squeezed under his body as City won 4-3 on penalties after a goalless draw.

Millions of people watching the game on television were shocked as Sarri repeatedly gestured at Kepa to come off but the keeper waved him away, before defender David Luiz came over to speak to him and then passed on a message to the bench that the keeper was feeling fine and wanted to carry on playing.

Sarri stormed down the tunnel in rage and appeared to be all set to turn his back on the team. At the last minute, he turned around and returned to the touchline for the final minutes of extra-time and penalties.

The Italian, who is widely rumoured to be facing the sack by Chelsea owner Roman Abramovich after a disappointing season, played down the row later.

"In that situation there was a big misunderstanding. I understood there was a problem and we needed a change. I didn't find out until the doctor arrived to the bench after a few minutes. It was a big misunderstanding. I understood the goalkeeper had cramp and for me he was unable to go to penalties but the problem was not cramp so he was able to go to penalties," Sarri said.

But the footballing world was definitely on the Italian's side, with many people on Twitter and Facebook believing it was a sign that modern players had too much power.

"If I was in the dressing room I would expect the manager to come in and deal with it straight away," former Chelsea captain John Terry turned TV pundit said afterwards.

The incident did nothing to undermine the widespread belief that Sarri has "lost the dressing room" at Chelsea.

They are sixth in the Premier League, and were recently thrashed 6-0 by City in the league.

"After this match I have to say that I'm sure (I have the backing of the players) because they played exactly how I asked today and I am proud of my players. We showed to everyone we could become a very solid team. Against Manchester City is not easy so I am really very happy with my players, proud of my players," Sarri said.

But most football experts believe his days at Stamford Bridge are numbered.