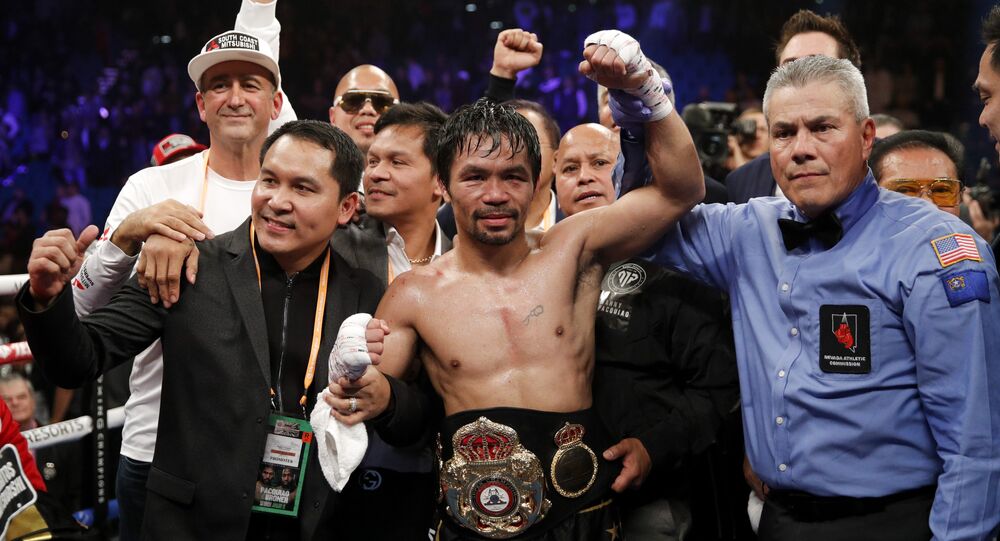 There are strong rumours that Manny Pacquiao will face Floyd Mayweather in a rematch of their 2015 fight but this time they will have a combined age of 82. Sputnik looks at other sports stars who retired long after their "best before" date.

When Pacquiao, 40, defeated 29-year-old Kevin Broner by unanimous decision on Saturday, 19 January, he immediately called out Mayweather, who beat him on points four years ago.

Mayweather, 42, who went back into retirement after last year's victory over Conor McGregor but won an exhibition match against Japanese kickboxer Tenshin Nasukawa on 31 December, has not yet commented on whether he would be up for Mayweather v Pacquiao II.

But they are by no means the first sports stars to carry on long past their prime.

As a young boxer George Foreman was a huge, glowering monster who often played the bad guy against more popular fighters like Muhammad Ali and Joe Frazier.

He won the world heavyweight title by pummeling Frazier into submission on a famous night in Kingston, Jamaica, but lost his title to Ali during the Rumble In The Jungle in Kinshasa in 1974.

Foreman later retired from boxing, became a born-again Christian, a preacher and the inventor of a best-selling meat grill.

When he shocked the world by returning to the ring in the 1990s he was a totally different person — cuddly, wise-cracking and avuncular.

But Foreman still had dynamite in his fists as he proved in November 1994 when, at the age of 45, he knocked out 26-year-old Michael Moorer to become IBF and WBA world champion.

He defended the title once but carried on fighting, just for the hell of it, until 1997 when he quit after losing Shannon Briggs. He was 48.

England international Matthews was 50 years old when he played the last of his 710 appearances in English football.

Young Stanley, a tricky right winger who was later nicknamed The Wizard of the Dribble, made his debut for his local team, Stoke City, in 1932 and played his first game for England aged just 19.

Four years later he was in the England team which played Germany in Berlin. All 11 players gave the Nazi salute before the kick-off, a gesture Matthews later said he regretted.

After a break for the war — which included guesting for Arsenal in a famously fogbound friendly match with Dynamo Moscow — Matthews returned to Stoke and then, in 1947, he joined Blackpool for £11,500.

"You're 32, do you think you can make it for another couple of years?" Blackpool manager Joe Smith asked him when he signed him.

Matthews would play for another 18 years for The Tangerines, memorably helping them to win the FA Cup Final 4-3 in 1953.

In his final season in 1965 he became the first footballer to be knighted while still playing.

Serena Williams is still going strong at 37, which is pretty old for a professional tennis player.

The American has won a record 39 Grand Slam titles — 23 in singles, 14 in women's doubles, and two in mixed doubles — and looks determined to equal and perhaps even beat the 24 singles titles won by the great Australian, Margaret Court, who retired aged 35.

Serena had a baby in 2017 but was determined it would not be the end of her career and came back to make it to the final of both Wimbledon and the US Open last year.

Her sister Venus — who won Wimbledon five times and the US Open twice — is even older and is also still playing. She will be 39 in June.

Venus lost to Romania's Simone Halep in the Australian Open last week, a result which was avenged when Serena beat Halep on Monday, January 21.

But Williams crashed out of the tournament on Wednesday, January 23, beaten by Karolina Pliskova, despite leading 5-1 in the final set and having four match points.

You thought I was going to mention Roger Federer, didn't you?

Well Federer may be an ageing tennis legend but he is not the oldest Grand Slam tennis champion.

That accolade goes to Australia's Ken Rosewall, who won the 1972 Australian Open aged 37 years and 63 days.

His opponent Malcolm Anderson was 36 and had been working as a tennis and squash instructor for four years before coming out of retirement only a few weeks before the tournament.

Both were family men — Anderson had three children, Rosewall had two.

Rosewall won four Australian Opens in total as well as two French Opens and two US Opens but was beaten in four Wimbledon finals, the last in 1974 when he was 38 and his opponent Jimmy Connors was just 22.

Of course Federer, who turned 37 in August, could beat Rosewall's record if he wins the French or US Open or Wimbledon this year but he has already crashed out of the Australian Open.

The South African golfer finally retired from the game in 2009, at the age of 73.

But he set another record in 2013 when he became the oldest athlete ever to pose nude in the Body Issue of ESPN's Magazine.

Player started out hitting the ball when he was 14 and was so good he turned pro three years later.

His golden years came in the 1960s and 1970s — at the height of South Africa's apartheid shame — when he won the US Open, the Masters, the PGA Championship and The Open in Britain.

In 1966 Player praised the apartheid system of Prime Minister Hendrik Verwoerd — who was assassinated later that year — but he had changed his tune by 1987.

"We have a terrible system in apartheid…it's almost a cancerous disease. I'm happy to say it's being eliminated….we've got to get rid of this apartheid," Player then told the Los Angeles Times.

Despite his political flip-flopping he was voted "Sportsman of the Century" in South Africa in 2000.

Manny Pacquiao Turns Back the Clock, Beats a Rival 11 Years His Junior