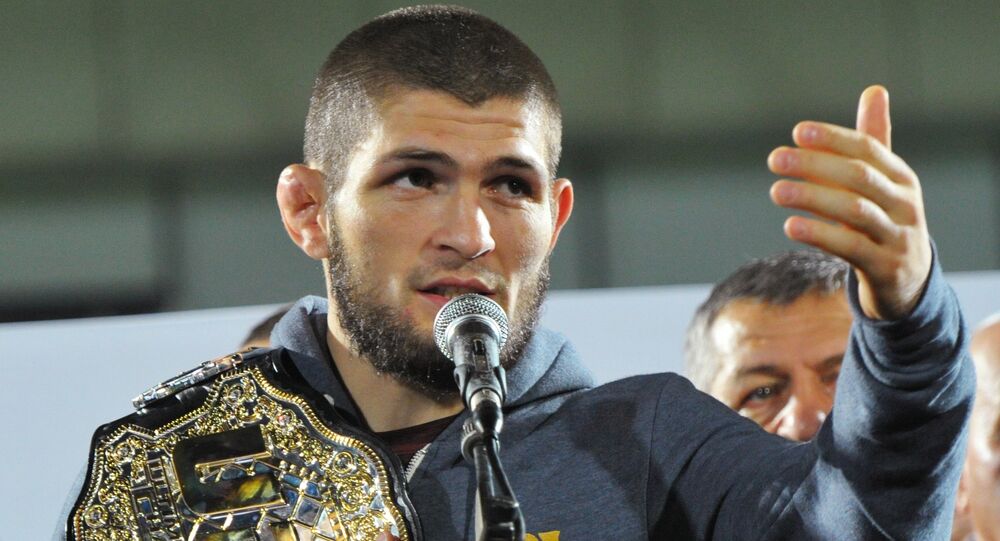 Khabib Nurmagomedov from Russia beat Conor McGregor in the fight for UFC Lightweight Championship in October 2018, but the bout’s aftermath does not seem to want to die down. Nate Diaz, who had also beat the Irish MMA star, earlier called out Khabib to face him in the Octagon but started a fight with the current champion on social media instead.

The number 10 in the official UFC (Ultimate Fighting Championship) lightweight rankings, American Nate Diaz, got into an online brawl with UFC Lightweight Champion Khabib Nurmagomedov when he called Russia’s fighter and his team pussies. The insult appeared in response to Khabib’s post featuring a GIF of the victorious chokehold against Conor MacGregor.

​In his comment, Diaz referred to an earlier clash with Khabib in a Las Vegas hotel. The latter responded by calling Diaz a coward and posted what he apparently considered to be proof of his people’s smashing Diaz.

You was hiding behind security and ran away coward, it’s clear on the video. We just smashed your team that night you punk pic.twitter.com/xvJoO8thxo

​This did not seem to impress Diaz, reacting with a call for Khabib to be real.

Be real
You know what happened live with it 😊👋

​The brawl, both fighters referred to, is a clash at a World Series of Fighting event in Las Vegas in 2015, which fuelled the tensions between them.
Incidentally, this punch exchange on Twitter happened soon after UFC head Dana White commented on Twitter in response to one user saying that Nate had turned the fight down in spite of his earlier call. In October, soon after Khabib took down McGregor in the fight for the UFC Championship, Diaz, who also beat the Irish MMA bad boy, challenged the new champion to face him in the Octagon.

​It has not been confirmed that a Khabib-Nate bout will not take place. Incidentally, some point to an uneasy history between UFC boss White and Diaz, who accused the official of lying about his fights.

This fucker can't stop making shit up about me and I haven't been offered any fights except the one Iaughed at 👊🏼🖕🏼 pic.twitter.com/7gRskEXEP9