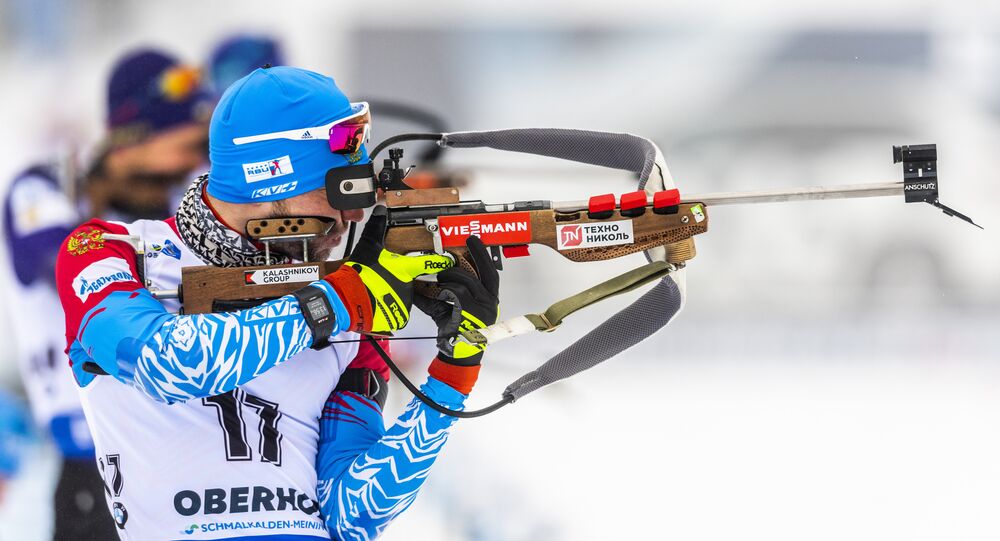 Russia’s Alexander Loginov, who had served a two-year suspension for doping in 2014, came first in the 10km sprint at the International Biathlon Union (IBU) World Cup in Germany.

Biathlete Alexander Loginov’s IBU World Cup win in Oberhof, Germany on Friday was met with disdain by fellow competitors, who took aim at the athlete for the previous doping abuse.

France’s Martin Fourcade, who finished in sixth place on Friday, dismissed the victory as a “disgrace”.

“I’m not happy that Loginov has won. I’m ok with the fact he’s allowed to compete now. But he won’t get my respect as he’d never apologised for doping. We need to be fair. His victory is a disgrace”, Fourcade said.

Can anyone challenge Alexander Loginov for the lead here in #OBE19? The Russian leads Boe and Fourcade in the finish.

Fourcade is ‘Overshooting the Mark’ – Lawyer

Christof Wieschemann, the lawyer of skiing gold medallist Alexander Legkov, whose disqualification was overturned, said that Fourcade’s efforts in the fight against doping are “fundamentally welcome”, although “in this special regard it appears that he is overshooting the mark”.

“Anti-Doping Rules do not serve to select persons of good character or even to assess if an athlete who has been guilty of an anti-doping rule violation in the past has a good character or not. I reject doping strictly, but as long as no one knows the individual background, no one has the right to make a moral judgment”, he said.

“Every athlete has the right to be considered as clean and honest unless the opposite is proven, no matter if he has been subject to a suspension in the past and no matter which nationality he has.  If an athlete achieves under this condition to be the first, [then] he has the right that his performance will be respected”, the lawyer elaborated.

According to him, Fourcade’s statement gives reason to think that he either is not ready, or is not willing to accept that a biathlete is entitled to make a comeback after a suspension for doping offences is expired.

© Sputnik / Konstantin Chalabov
International Biathlon Union: Secretary General Steps Down Amid Doping Probe
“That would lead to [a] demand that a doping offense should be sanctioned with a lifelong ban. With all respect for the passion Mr Fourcade may have for his sport, it is not explainable that for every criminal in normal life [there] must be a chance given to be rehabilitated and to find a golden bridge back to lawful living – except in sports. That would overestimate the role of sports”, Wieschemann explained.

Wieschemann then said addressed “an intensive debate” that’s taken place in the West before congratulating Loginov on his win:

“If a first or even a second doping offense is allowed to be sanctioned with a lifelong ban, so far, we have broad consent between politics and sports that this is not justified. Possibility for rehabilitation for a first case offense is a requirement of human rights and human dignity and both rights belong to every human being[,] regardless which nation he has. In this sense, congratulations to Alexander Loginov”.

Fourcade was not the only biathlete to be frustrated with Loginov’s win: Swede Sebastian Samuelsson, who finished third, demanded an apology from the 26-year-old Russian.

“Loginov himself could have apologised to the whole biathlon family. If you used drugs, there is no place for you here. But if you show regret about what happened, people will find it much easier to trust you”, he said.

They are the three men who dealt with the tricky conditions in #OBE19 the best: Alexander Loginov, @7ohannesbo and @SebbeSamuelsson 👏

Speaking to Norwegian broadcaster NRK, Loginov said that he did not want to respond to any negative comments regarding his win.

“I would like to personally chat with Martin. We can discuss all our issues. There’s nothing else to say”.

In a parallel development, German newspaper Süddeutsche Zeitung suggested that regardless of his achievement, Loginov won’t be able to get rid of the “doping sinner stigma”.

Some, however, defended the Russian despite the doping scandal, including eight-time Olympic champion Ole Einar Bjorndalen, who stressed that Loginov “has already served his punishment”.

“We need to respect the fact that he has come back. But some have reacted negatively to his win. You could say not many people in the field of biathlon were happy at this result”, Bjorndalen told Norwegian reporters.

Renowned international sports lawyer Lucien Valloni also spoke in defence of Loginov, pointing to the fact that “everybody knows that all the press and the media there are a little bit against Russia actually”.

“I believe that this is unsportsmanlike behaviour, it is unfair. While Loginov has negative doping tests, other athletes should recognise and respect him as an individual, as an athlete. […] Now he is showing excellent results. I think this behaviour cannot be justified”.

With very consistent shooting all round, the @russianbiathlon women grabbed victory in today's #OBE19 relay ahead of @skiverband and @olympijskytym 🥇🥈🥉https://t.co/CrsMrbuQ97

In November 2014 Loginov was temporarily suspended from training and competing after traces of the oxygen boosting Erythropoietin (EPO) were found in a drug test. Nine months later, the International Biathlon Union announced that he would not be allowed to compete until 25 November, 2016 – he received a two-year suspension for doping offences.