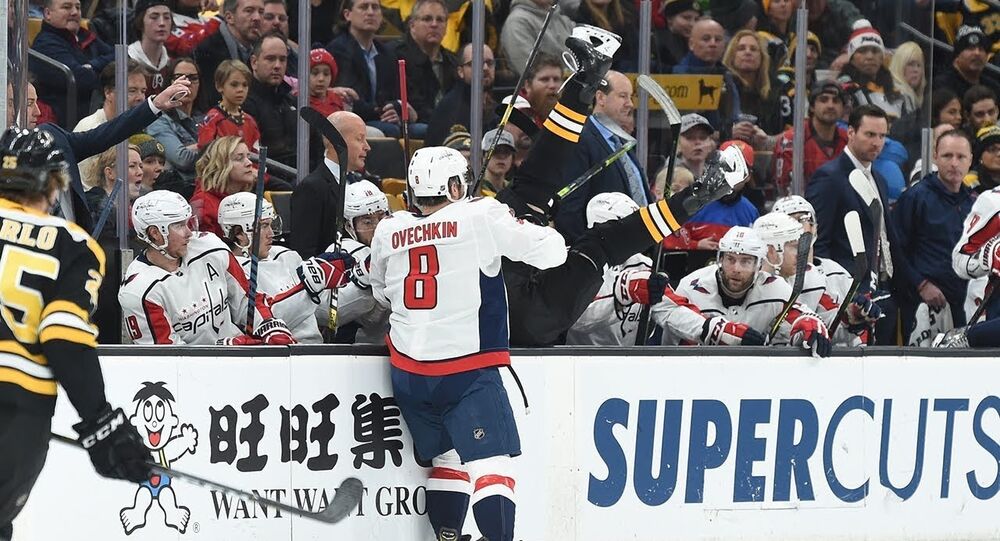 The Washington Capitals' star forward is well-known for his patented move of checking other players (and sometimes himself) into the bench.

Late in the first period of the Caps' game against the Boston Bruins on Thursday, Alex 'Ovi' Ovechkin slammed Boston Bruins defenceman Zdeno Chara so hard into the boards that the player fell into the Capitals' bench.

The moment was caught on video, and posted on NHL's official YouTube channel.

It wasn't the first time Ovi has pulled the bench-checking move in a game.

A year before that, he sent Los Angeles Kings' forward Kyle Clifford into the Capitals' bench.

Finally, in 2012, Ovi tumbled into his own bench after losing his balance while going over the boards for a line change.

The Capitals went on to defeat the Bruins 4:2, with Ovechkin pushing his team over the top, scoring two goals.

© AP Photo / Jeff Roberson, File
WATCH Ovi 8 Melt Hearts Throwing Present From Ice Rink to Girl Fan
The Caps' left winger isn't all about tough love, however. Last month, Ovi set fire to social media after taking time out from his warm-up session to give an 18 year old fan a unique birthday present, showing off his skills by pulling some fancy stick work with a puck before casually sending it to her over the boards.
...
Reddit
Google+
Blogger
Pinterest
StumbleUpon
Telegram
WhatsApp
10