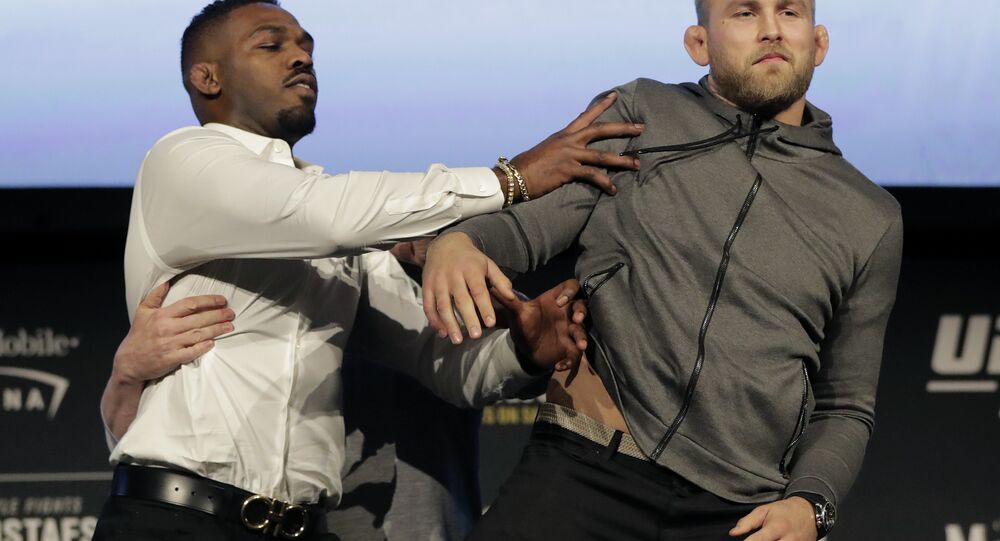 American light heavyweight Jon Jones is set to fight Swede Alexander Gustaffson despite testing positive for a small amount of a prohibited anabolic steroid earlier in December. Apart from a ritual stand-off between the two fighters, their pre-fight presser of the Ultimate Fighting Championship has been marked by a showdown of another kind.

During the UFC 232 pre-fight presser, US fighter Jon Jones shunned Swedish reporter Izabelle Kostic, who asked him why he had tested positive after a drug probe on 9 December, simply responding “Next question, thank you.”

She didn’t leave it like this and immediately confronted UFC president Dana White, demanding an explanation why another UFC athlete Frank Mir was suspended for two years for the same incident in 2017. While the official lingered with an answer, saying he did not quite understand the question, Jones interfered and took the mic, scolding the journalist.

READ MORE: 'King is Back': UFC Fans Abuzz as McGregor Throws Out Teaser of 2019 Comeback

“Sit down. Take the mic from her, better questions, better journalism. Is there a real journalist? Better journalism, you suck… who are you, where did you come from?” he berated the woman until he was interrupted by White trying to do damage control.

While the journalist was reportedly booed by Jones’s fans, many netizens shamed the fighter on social media for his disrespectful behaviour and criticised the UFC.

How dumb do you have to be to not expect drugs to be brought up at a Jon Jones presser?! It would have been like going to Khabib Conor one and not asking about bus — it’s the ONLY question

Just watched the #UFC232 presser & Im absolutely disgusted at the treatment of the female journalist asking legit questions regarding Jones & his repeated PED offenses. @JonnyBones, @danawhite & the other crazies in attendance should be ashamed for their actions. How very telling

How @JonnyBones spoke to Izabelle Kostic from @kimurasweden at the #UFC232 presser was disgusting, he’s a joke with zero class. @ufc and @danawhite should be embarrassed they keep standing by this extremely talented but twat of an individual. @arielhelwani thoughts?

Jon Jones responds to questions regarding his positive tests at the #UFC232 presser on Thursday @DaveMMAdden @MMARoasted pic.twitter.com/yp6TvypQdB

UFC legal interns handing out DMCA notices to everyone posting clips of Jon Jones making a fool of himself at the presser today: #UFC232 pic.twitter.com/P7tBo8RZWz

​The UFC fighter claimed that the question “shouldn’t have even been brought up” and complained about being “wronged” himself, the Independent reports.

“It’s such a small amount that it has no effect. I think the professionals whether it’s Usada (United States Anti-Doping Agency) or the UFC are realising, ‘Jon is kind of like a guinea pig in this situation.’ I was almost wronged in this situation. Even though (the substance) was in me, I think this is a way of fixing a wrong and making it right again by not cancelling this fight”, he said, pointing out that although “a lot of fans got hurt in this situation, we saved the event”.

Ex-champion Jon Jones and former title challenger Alexander Gustafsson are to fight for the UFC Light Heavyweight Champion title in Inglewood, California. It was originally supposed to take place in Nevada, but was moved as Jones’s testing showed “abnormality” — a trace amount of anabolic steroid – and the California State Athletic Commission agreed to grant him a license. It was the same substance, found in his system in 2017, when he was banned for 15 months.