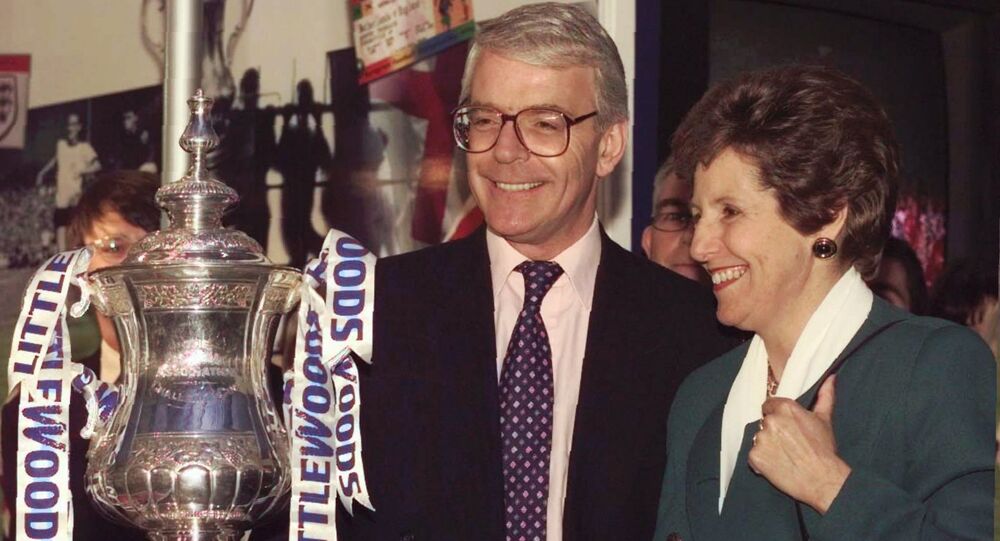 In the wake of the Hillsborough disaster, in which 92 Liverpool fans were crushed to death at Sheffield Wednesday's stadium during an FA Cup semi final match against Nottingham Forest, the government had decided to ban standing at all grounds in the top two tiers of English football.

In June 1994 a civil servant with the Department of National Heritage wrote to Prime Minister John Major forewarning him his beloved Chelsea were one of a number of football clubs whose application to be exempted from all-seater stadiums had been rejected.

This was the first political photo I loved. It’s good, healthy and enjoyable to get on with your adversaries pic.twitter.com/2NN07n0I6g

​"Tomorrow my Secretary of State will be announcing his final decision on applications which have been received from clubs in the Premier League and First Division of the Football League for extensions to the government's all-seater deadline…..In view of his widely-known interest in Chelsea FC, you may wish to forewarn the Prime Minister that the club is among those whose applications the Secretary of State has decided to reject," wrote Ms. Shaw, in a letter which was released by the National Archives on Friday, December 28.

The letter goes on to say that Chelsea — then under the ownership of maverick chairman Ken Bates — had decided not to appeal against his decision.

Bates later turned to Matthew Harding, a businessman and Chelsea fan, for the investment required to convert the club's Stamford Bridge stadium into an all-seater ground.

© AP Photo /
Chelsea's Stamford Bridge stadium, which was converted to all-seater in the late 1990s

Five other clubs — Manchester City, Newcastle, Barnsley, Oldham Athletic and Swindon Town — also had their applications for an exemption turned down.

But Mr. Brooke did agree to exempt Derby County, Sunderland, Middlesbrough, Portsmouth and Grimsby from converting their stadiums to all-seater because all five were already planning to move to brand new all-seater stadia.

In the event Portsmouth and Grimsby never did move ground but Middlesbrough moved to the Riverside Stadium in 1995, Derby opened Pride Park in 1997 and Sunderland played their first game at the Stadium of Light the same year.

The same file in the National Archives also contains a letter from the then Home Secretary, Michael Howard, to Mr. Major about football hooliganism.

Failure to Qualify for 1994 World Cup Seen as a Positive

The letter, written in December 1993, starts by referring to a meeting the pair had had the previous month in which Mr. Major had raised his concerns about outbreaks of hooliganism in 1994 and had asked if it was possible to put in extra measures in the Criminal Justice and Public Order Bill, which was then going through Parliament.

"Now that England and Wales have failed to qualify for the World Cup in America, there is likely to be far less pressure on the government to act quickly," writes Mr. Howard.

"Fewer matches will be played abroad and the only one which causes concern is the game between Germany and England, which is scheduled to take place in Germany on 20 April 1994, the anniversary of Hitler's birth," adds Mr. Howard.

Mr. Howard said he shared the Prime Minister's concerns that the game "might provide a focus for extreme groups" but he said even if they were to add new measures to the bill they would not come into effect in time for the game.

"The Germans, too, are alive to the possibility of trouble and have already switched the venue from Munich to Hamburg," Mr. Howard added.

England eventually ended up pulling out of the friendly match.

Seven years later England fans did attend a match in Munich — when England trounced Germany 5-1 in a World Cup qualifier, with Michael Owen scoring a hat-trick.

By then football hooliganism, or the "English disease" as it had been known, was almost eradicated among England fans and the game passed off peacefully.