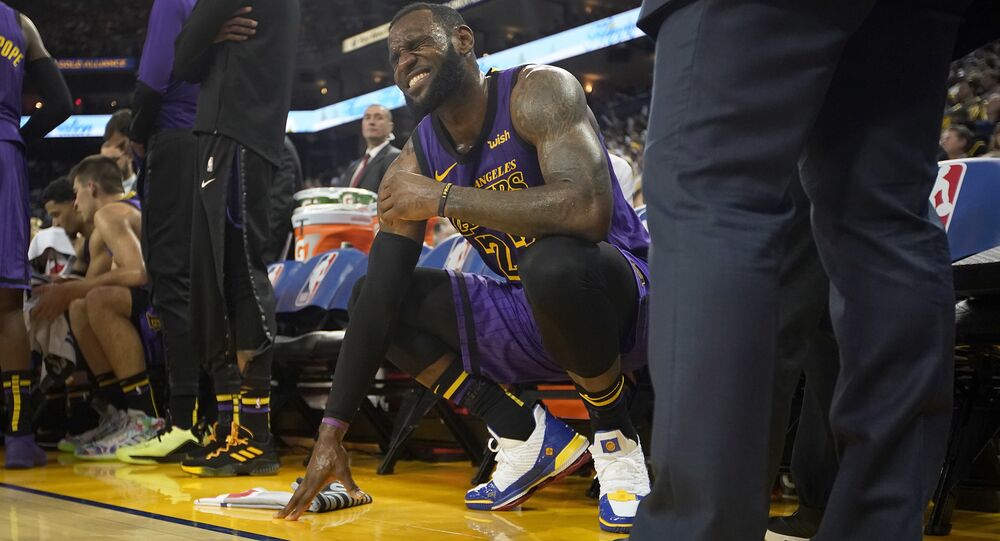 LA Lakers' victory over the Warriors was overshadowed by LeBron James' shock injury. The rest of the Lakers players managed to blow out the two-time defending NBA champions, while the team's main star is yet to learn the severity of his injury following an MRI scan.

Lakers forward LeBron James was forced to quit Tuesday's game against Golden State midway through the third quarter with a groin injury.

The NBA icon said that he "felt a pop" in his left groin after his leg slipped; he then departed to the locker room. "[Golden State Warriors'] Draymond [Green] got his hand on the ball, and when he got the loose ball I just over-extended my groin I guess. I felt it coming down the court and I just over-extended it again back on defense. It was just an unfortunate play," said James, who is slated to have an MRI scan on Wednesday.

LeBron left the game early with a left groin injury and told Lakers trainers that he "felt a pop." 🙏 pic.twitter.com/1tH9n8Of9l

His younger teammates went on to regroup and outshoot the Warriors 127-101, and some fans even suggested that his injury could be part of his plan to show that his team can do well without him.

The last time James missed a game was on 12 April 2017; he has since featured in 156 straight games, including in the regular season and post-season — the greatest mystery in sports?

Very surprised LeBron appears to have a groin pull. Most durable superstar ever. This kind of injury just doesn't happen to him.

Lebron James might have had his first real injury of his career. Think about that. Most durable athlete I’ve seen.

LeBron, 33, a four-time NBA MVP and a three-time NBA Finals MVP, played for the Cleveland Cavaliers in 2003-2010 before he left for the Miami Hit. He came back to the Cavs in 2014, and eventually became the club's all-time best in terms of games played, as well as the leading scorer, with 23,119 points (over 12,000 more than the second-best Ilgauskas). He moved to the Los Angeles Lakers in July as a free agent on a four-year $153.3 million deal.

During his 15-year career, he made nine appearances in the NBA Finals, including the past eight Eastern Conference championship rounds. The NBA's all-time career playoff leader in points, steals and minutes played, LeBron James is widely acknowledged as one of the greatest basketball players in history.